In light of the tragic event and passing of Dan Wheldon, Michael Lewis and the entire MJL Racing team express their sincere thoughts and prayers to the entire Wheldon family.

While driving for the PREMA Powerteam, Michael set fast time in practice on Friday, October 14, qualified first for the race on Saturday, then set fast time during the race and won by a convincing margin of 10 seconds over second-place driver Sergio Campana at the conclusion of Saturday’s race. The win allowed Michael to take the title of 2011 Formula 3 Italia Rookie Champion, and he firmly held onto second place in the overall series standings.

As a result of Michael taking the series’ rookie title, he earned the opportunity to test drive a Ferrari Formula 1 race car at the Vallelunga Circuit on November 15. 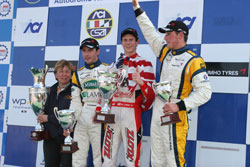 FREE PRACTICE
On Friday morning 13 Formula 3 Italia drivers took to the famous Monza Circuit for two 30-minute free practice sessions. For the first practice session, Michael ran the entire session on old tires and was able to record the third fastest time of the session.

“We wanted to save our set of new tires for the second session so our team worked on some ‘fine tuning’ of the chassis in the morning session,” said Michael Lewis. “We found out some things that would help is in qualifying trim so I was looking forward to the afternoon session to record a good time.”

The second practice session occurred late in the day on Friday, and after a few warm-up laps, the PREMA Powerteam made the decision to have Michael do a “mock qualifying” session with new tires. The end result was a time of 1:46.026, which put Michael P-1 for the second free practice session and gave Michael and his team confidence for qualifying well on Saturday.

QUALIFYING
During qualifying on Saturday morning, Michael was P-1 while running on the first set of new tires. However, Michael changed to a second set of fresh tires, as did the rest of the field, so it was important that Michael improve his time on the second set of tires. On the last lap of practice Michael turned his best lap of 1:45.410, which was just enough to earn the pole position for Race 1.

“Our team’s goal was to get our combination right during the two practice sessions, so I could focus on qualifying well,” said Michael. “My engineer Fabio Zilio made all the right decisions on the car set-up and my friend Giacomo Ricci gave me the instructions about how to get the most from the tow, so everything worked as planned. I was able to make a good lap, and as a result, earned the pole for the first race.” 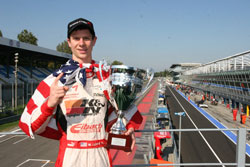 Twelve F-3 cars lined up on the grid at the Monza Circuit early Saturday afternoon under ideal weather conditions. Michael was placed on the grid in the first position. When the lights went off Michael launched his Dallara F-3 Italia car into first place and arrived into the first chicane with a two-car lead. After the exit from the chicane, Michael began to build his lead and by the halfway point of the race, he had an eight-second lead over second-place driver Sergio Campana. After the 30-minute plus one-lap race, Michael took the checkered flag as the winner of Race 1 and gained valuable points for the overall championship as well as securing the 2011 Rookie Championship.

“It was a great feeling to win here at Monza as it is such a famous track with such wonderful history,” said Michael. “I made a great launch at the start of the race and was able to clear the first chicane without a problem so I kept my pace strong for the race. I could see that I had created space between me to the second-place car so all was working well. My PREMA Powerteam Dallara car was perfect the entire race. I owe this win and the success I had here so far at Monza to all the hard work done by my PREMA Powerteam crew. Also, my good friend Giacomo Ricci gave me some tips as to how to run the pace for the race. I did exactly as he wanted and it felt so good to see the checkered flag and to have this win at Monza. I was told during the television interview after the podium ceremony that I was the 2011 Rookie Champion and that I would soon be able to drive a Ferrari F-1 car. This was an unbelievable day and experience for me to win here at Monza.”

RACE 2
After the win on Saturday in Race 1, and earning points for both qualifying P-1 and fastest lap of Race 1, Michael was now in striking distance to go for the overall ACI Sport F-3 Italia Series Championship. Michael narrowed the points lead down to eight points behind Sergio Campana. Michael was positioned on the grid to start Race 2 in eighth and Campana was positioned fourth. When the lights went out Michael obtained an amazing start and grabbed four positions immediately and came out of the first chicane in fourth position. Then Michael methodically began to work on passing cars. By lap five Michael took the lead in the race and then built a two-second lead over second-place driver Victor Guerin. With just two laps remaining in the race Michael had the lead but when he entered a chicane he accidentally hit the birm with the right rear wheel, which damaged the suspension. Michael did not know he had this problem so when braking for the next chicane he only had three wheels on the ground and the car did not turn as expected. Michael went off into the gravel and that ended his day and the chance to win the overall series championship.

“I was so close to the end of the race and I was concentrating on hitting my marks and I made a slight mistake with late braking into the chicane, so I hit the birm hard and that unfortunately broke the right rear suspension. On the next corner I went off the track, which ended my day. I feel very bad for my PREMA Powerteam and all the people who have worked for me all season long to have come so far and be this close to winning the second race at Monza, which would have given us the overall F-3 Italia Championship. We had a really good season and I am proud of what we accomplished together as a team.

“I came into this series as a rookie and I learned so much about how to race and how to work with brilliant people so the season was good for me,” continued Michael. “I am looking forward now to prepare for ‘the prize’ of driving the Ferrari Formula 1 car on November 15, at Vallelunga. This is a dream come true for me. I owe so much to the PREMA Powerteam for the success I had this season and to the help and encouragement I received at each race from my friend Giacomo Ricci.” 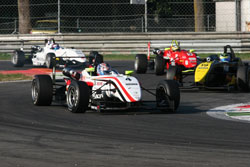 “The Formula 3 Italia season arrived to an end here at Monza with Michael who won the ‘main’ race after having secured the pole position and won the rookie title,” said Angelo Rosin, PREMA Powerteam team principal. “This is a great result for both the driver and the team. Michael once again demonstrated his skill and potential. In this past year he has grown as a man and a driver, and we are really proud of him today. He only made one mistake this weekend, when today he lost all chances of winning the series’ championship. Although things could have gone in a different direction, we are still really proud to have worked with Michael this season.”

Michael Lewis is now preparing for the November 15 Ferrari Formula 1 Test at the Vallelunga Circuit. The Ferrari Formula 1 team offers this fantastic opportunity to the 2011 F-3 Italia Rookie Champion as well as the top-three drivers in the overall championship. Then Michael will schedule some winter test dates to work on race program development for the 2012 season.