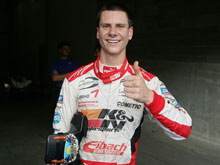 The 30 drivers will participate in the FIA Institute’s four-day shootout, November 15–18, 2011, in Melk, Austria, to claim one of 18 spots in the Academy program. The drivers must show their ability over the four days of driving and non-driving assessments. The selection will be announced at the end of the last day.

In only its second year, the Academy has expanded its program participants from 12 to 18 to ensure that more drivers from around the world have access to this important safety-focused initiative. Those drivers who succeed will receive a place on the Academy’s fully funded training program, which is designed to help drivers develop their motorsports careers, while increasing safety skills and actively promoting the principles of safety, fairness and responsibility on and off the track.

According to the FIA, at least three drivers will be selected from each of the FIA Institute’s five funding areas: North, Central and South America; Western and Northern Europe; Central and Eastern Europe; Middle East and Africa; and Asia and Oceania.

The selection process and training program will be led by former Formula One driver and two-time Le Mans winner Alex Wurz and former World Rally Champion co-driver Robert Reid. At the Selection Event, Wurz and Reid will lead exercises designed to evaluate fitness and performance, media techniques, teamwork and psychology.