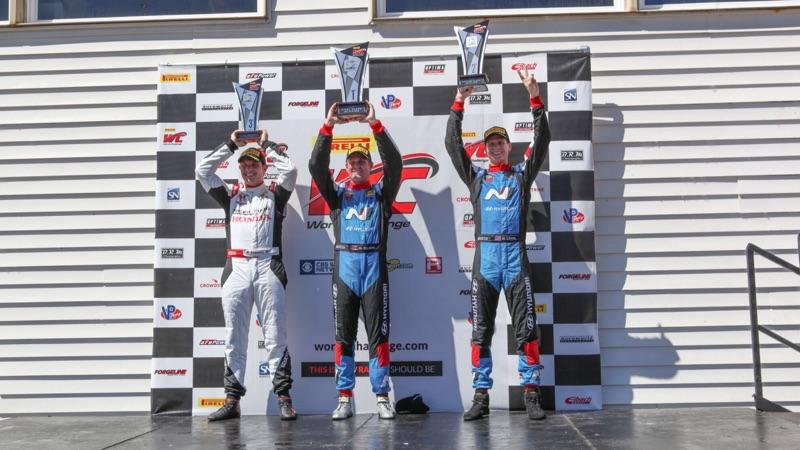 Portland, Oregon — Michael Lewis was just shy of the top spot of the podium during the 58th Rose Cup Races as he earned two second-place finishes in Rounds 7 and 8 of the TCR class of the Pirelli World Challenge. 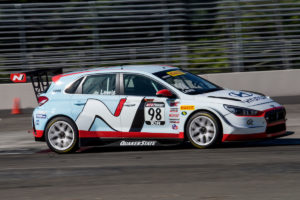 Michael Lewis qualified third on Friday, July 13, for Round 7 of the Pirelli World Challenge TCR race the next day.

Michael, who began his sports car racing career at PIR back in 2009, recorded a best lap of 1:18.736 at 90.07 m.p.h. in his No. 98 BHA Hyundai i30 N TCR machine. The Laguna Beach, California, native also has two TCR feature wins to his credit this year—at Lime Rock Park and Circuit of The Americas—and was ranked third in the TCR drivers’ standings entering this event. 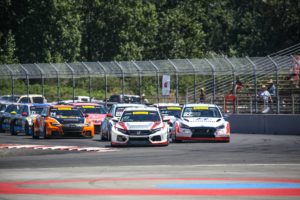 Drivers battled for position after the start to Saturday’s TCR race. Here, Michael Lewis is just behind the pole-sitter in third, while his teammate Mark Wilkins is in second.

“I went out and laid down the best lap I could in qualifying,” Michael Lewis said. “I think I could have cleaned up the lap a little better, but it felt strong. Obviously, I’d like to be on the front row like Ryan (Eversley) and Mark. I was second for most of the session, but Mark just nipped me at the end. Mark and I were pushing each other, and I’m sure that will happen in the race, too. Our team prepares great cars for us. P1 was just a little outside our times, but I think our race car settings are good for this track. The PIR track is very busy for a driver, similar to a karting track.” 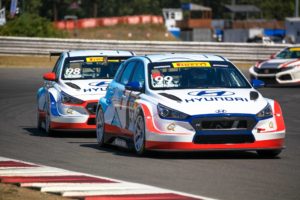 Michael Lewis and Mark Wilkins used traffic to pass for position, and the two finished second and first, respectively, in the TCR race on Saturday, July 14.

Drivers for Saturday’s first TCR race of the weekend took the green flag under a rolling start in 90 degree weather. Michael began Round 7 in third, with teammate Mark starting on the outside of the front row. They stayed close to pole-sitter Ryan Eversley, and after 25 laps, the trio encountered lapped traffic, allowing Mark to pass to take the lead. Michael also used lapped traffic to his benefit and passed Eversley on the penultimate lap in turn 7 to slide into the runner-up position. 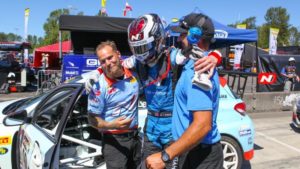 “Congratulations to my teammate Mark for another great win,” said Michael. “This is a strong team effort and we all want to do well. So, to have a 1-2 finish again is so special for Bryan Herta Autosport and Hyundai. Now, we have to come right back on Sunday and try to repeat the 1-2.”

Michael Lewis readies for TCR Round 8 on Sunday, July 15.

Michael had the prime location for Sunday’s 40-minute race where he started from the pole position in his No. 98 machine after recording the fastest race lap in Saturday’s main event. Mark Wilkins was to start in third, right behind Michael on the starting grid.

Unfortunately, Mark’s No. 99 BHA Hyundai i30 N TCR stopped on the track with a mechanical issue so he was unable to start the race.

At the start of the 31-lap feature race, front row starter Ryan Eversley got the jump into turn 1 over Michael, who was pursuing hard in his No. 98 BHA Hyundai i30 N TCR machine. Michael looked to be in position for the pass for the lead on several occasions Sunday. But Eversley was able to fight off Michael’s challenge each time, and held Michael to finish in second position. 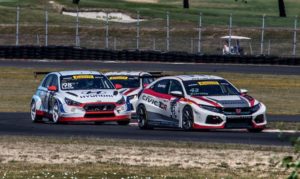 “Our car was excellent as usual today and I tried everything possible to slip by Ryan with the Hyundai i30 N,” Michael explained. “Ryan drove an excellent race and didn’t make any mistakes. I feel so badly for Mark. We were prepared for a good race from the 1-3 positions today. But he had an issue and couldn’t make the start. I know we’ll be ready for the next TCR weekend in Utah next month.”

The two second-place finishes have bolstered Michael’s championship hopes as he moved into second position in the TCR driver points with only four rounds remaining in the season, including Rounds 9 and 10 at Utah Motorsports Campus in Grantsville, Utah, August 10–12. Both Michael and Mark are former winners at Utah, with Michael earning a GT SprintX victory in 2016. 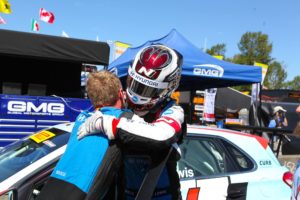 Rounds 7 and 8 of the Pirelli World Challenge TCR class from Portland International Raceway are scheduled to air on CBS Sports Network on Sunday, July 29, at 6 p.m. EDT / 3 p.m. PDT.