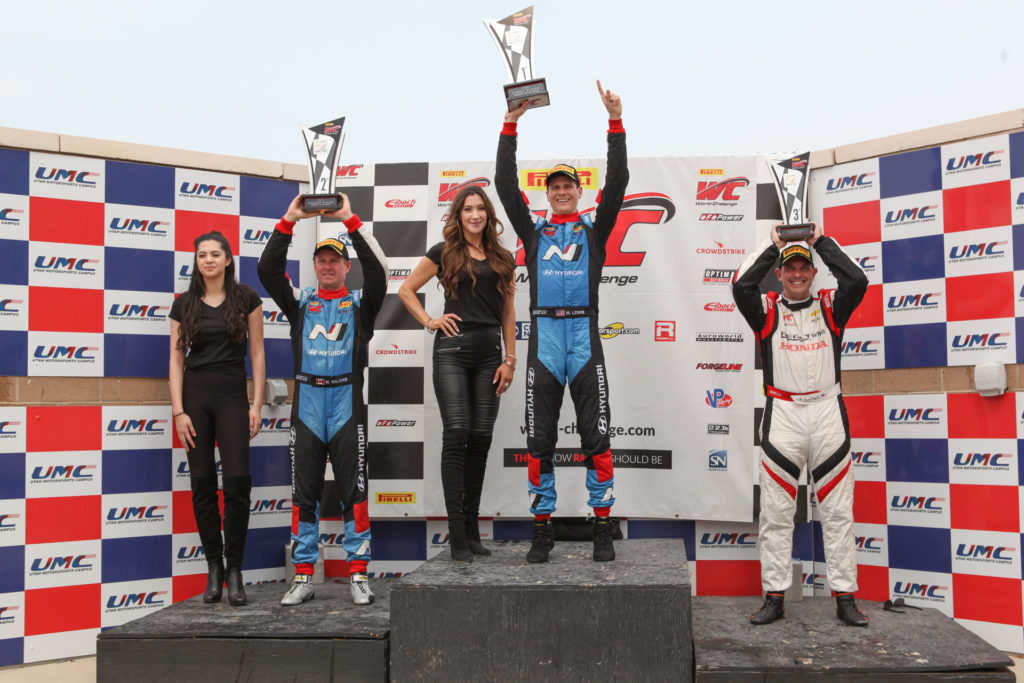 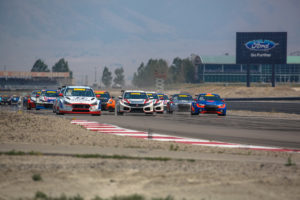 After setting quick time in qualifying for Round 9 on Saturday morning, August 11, Michael Lewis leads the field at the start of the race Saturday afternoon.

Both Michael and his Bryan Herta Autosport (BHA) with Curb-Agajanian Hyundai i30 N TCR teammate Mark Wilkins had a good feeling at the 3.048-mile, 14-turn road course southwest of Salt Lake City after the first few laps in the Friday morning practice round, August 10.

“You are always a little nervous going into the first practice session at any track,” said Michael Lewis, the California driver in the No. 98 BHA Hyundai i30 N TCR car. “You are not really sure what you have to work with in the initial track surface. But I think Mark and I both could tell pretty quickly that our Hyundai i30 N machines were good. We have to thank our engineer John Ward for setting up strong cars this morning. The crew has worked hard to get the cars prepared since last month at Portland.” 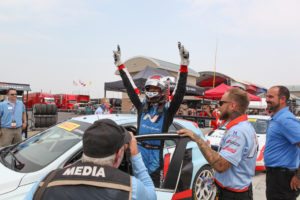 Victory Lane celebration for Michael Lewis and the Bryan Herta Autosport team after he won Round 9 of the TCR class in the PWC.

Michael turned in an impressive lap of one minute, 59.352 seconds for a speed of 91.93 miles per hour in the TCR class debut at the fast Utah racing plant. That quick lap time gave him the No. 1 position for Friday practice, as qualifying and the Round 9 40-minute sprint race was scheduled for Saturday, August 11. 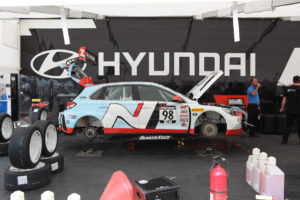 Bryan Herta Autosport crew members prepare the No. 98 Hyundai i30N TCR race car prior to Round 10 on Sunday, August 12, at Utah Motorsports Campus.

Michael continued on his quick pace and set the fastest time during Saturday morning’s qualifying session, placing him in pole position for that afternoon’s first race of the double-header.

Michael hit the throttle at the wave of the green flag Saturday in the Pirelli World Challenge Round 9 TCR event and never looked back in his No. 98 Bryan Herta Autosport with Curb-Agajanian Hyundai i30 N TCR race car. 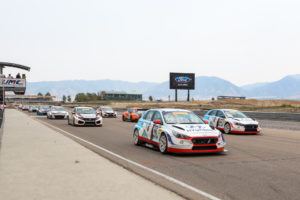 Hyundai represents Row 1 for Round 10 of the PWC TCR class with BHA drivers Michael Lewis and Mark Wilkins.

Driving from his pole position in the 40-minute sprint road racing event at Utah Motorsports Campus, he led wire-to-wire in the 20-lap feature in near 100-degree heat.

Only Michael’s BHA Hyundai teammate, Mark Wilkins, could stay close to him in the first half of the race as the two veteran racers pulled away from the rest of the TCR field Saturday. At the checkered flag, Michael defeated Mark by 2.613 seconds in the impressive 1-2 finish for the team’s fifth 1-2 finish of the 2018 TCR campaign. 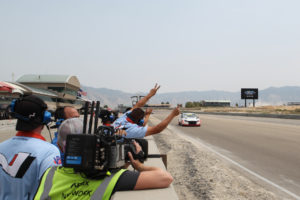 “Big thank you to all the Hyundai service managers and all these other corporate members being here,” said Michael Lewis. “It’s cool to get the win and see them cheering us on. We’re trying to get points for the driver’s championship and team championship. But, first and foremost, this win helps us as we’re working hard for the manufacturer championship for Hyundai.”

Michael also set the fastest race lap Saturday at 1:59.212 for a 92.04 miles per hour average. With that new track record, Michael started from the pole position again in Sunday’s Round 10 event with the unique standing start. Mark would start alongside on the front row in the 40-minute race. 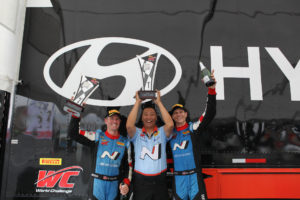 On Sunday, August 12, for the standing start, which is different than Saturday’s rolling start, Michael repeated his dominant performance from Saturday with a superb launch from pole position and he and his BHA teammate entered the first turn in the first and second positions, respectively. Michael and Mark both ran a clean race at the front throughout the 20-lap feature event in the hot Sunday afternoon sun, and when the checkered flag flew, Michael crossed the line in first position.

Sunday’s BHA 1-2 finish was the team’s sixth top-two performance in the first 10 races of the year. The 1-2 showing also extended the BHA point lead in the TCR Team standings (177-140) and Hyundai’s advantage in the TCR Manufacturers’ championship. 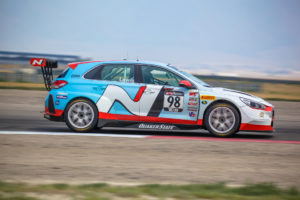 Michael Lewis setting fast time in the Bryan Herta Autosport with Curb-Agajanian Hyundai i30 N TCR race car during Round 9, which placed him on the pole for the following race on Sunday, August 12.

“The standing starts are a little more intense,” said Michael. “You have a few more things to do than when you have a rolling start. But our Hyundai’s have a really good launch and a real handbrake to help with the launch. We were going hard for a while and then, all of a sudden, it felt weird as if I had a flat tire or had come in contact with some oil or something. It made me go really wide in the esses. It was definitely intense out there but I’m glad we got back some of the grip there in the end.”

The Utah TCR doubleheader races will be shown on CBS Sports Network on Sunday, August 26, at 4 p.m. EDT / 1 p.m. PDT. 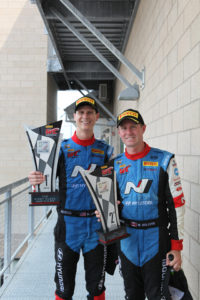 After claiming six 1-2 finishes so far in the 2018 TCR season, the BHA teammates have firmly placed Hyundai first in the manufacturers championship.

As a result of these recent wins, Michael stands second in the points championship, only seven points back from the lead. The 2018 Pirelli World Challenge TCR race season will conclude at the Grand Prix of Watkins Glen in Watkins Glen, New York, August 31–September 2, 2018.