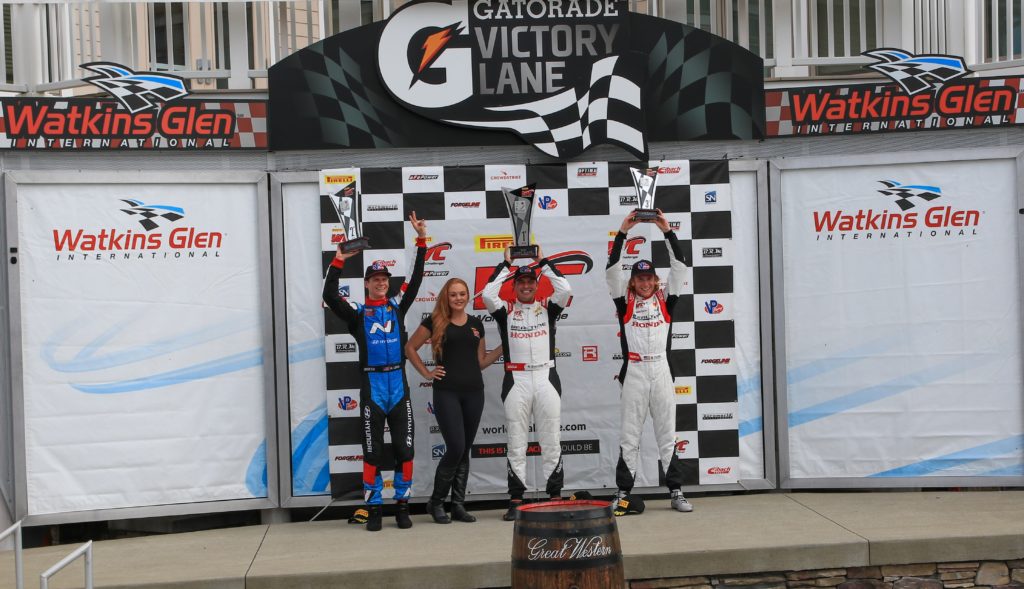 Just after the green flag waved to begin TCR Round 11, Michael Lewis quickly jumped into second position, where he challenged for first the entire race.

Watkins Glen, New York — It was Championship Sunday at Watkins Glen International in the final TCR race of the 2018 Pirelli World Challenge (PWC) road racing series, and at the end of the Round 12 40-minute sprint race, it was Bryan Herta Autosport with Curb-Agajanian scoring the TCR Team title and Hyundai taking the TCR Manufacturers’ Championship. 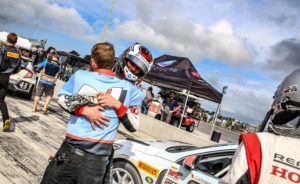 Michael Lewis receives a celebratory hug from Nate Smola, car chief of the No. 98, after Michael finished second at Watkins Glen International.

In the TCR Manufacturers’ battle, Hyundai came home with the championship with a 115-103 victory over Honda.

For Michael Lewis, he completed his 2018 TCR season in the No. 98 Hyundai in second place, just 17 points behind eventual Drivers’ champion Ryan Eversley.

Michael entered the race weekend on a tear of late with a double win weekend last month at Utah Motorsport Campus and closed within seven points of TCR driver points leader Ryan Eversley. Michael had a season-leading four race wins, including victories at Circuit of The Americas (COTA) and Lime Rock Park as well as four runner-up finishes in the first 10 events. 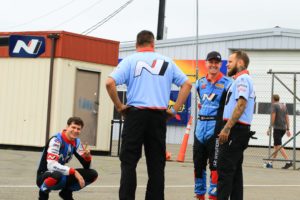 Bryan Herta Autosport (BHA) team members (from left to right) Michael Lewis, Robbie Poupart, Mark Wilkins and Nate Smola wait to get on track before the start of an official session.

“This is our final race of the season, and it has been a really great year with the team,” said Michael Lewis, prior to the start of the race weekend in the Finger Lakes region of Upstate New York. “This last race feels like it arrived all of a sudden. I am so happy to have been able to run five strong race weekends with Bryan Herta Autosport and Hyundai. We will work hard as a team to run another strong race event in order to secure the Teams’, Manufacturers’, and Drivers’ Championships. It will, for sure, be hard to do this as our competition is really strong. But that is why racing is fun!

“It will be fun to race with our team and the competition one more time on such a fast, flowing, and yet another historic track,” he continued. “A highlight of this weekend, before going into it, is the fact that our race cars will carry logos and a livery to an initiative called Hyundai Hope on Wheels. This initiative is to encourage and support Pediatric Cancer Research to help young men and women, such as our team’s friend named Reese, fight for their lives. The words ‘Reese is a Beast’ will be placed on our cars as well to show our support for our team’s friend during his fight for his life. I am honored to race with Bryan Herta Autosport and for Hyundai because they are recognizing an important cause through our racing adventures. 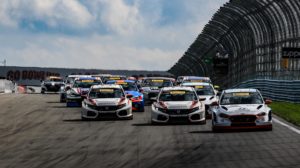 After setting fast time in Saturday’s race, Michael Lewis started on the pole for Sunday’s final race of the TCR season.

After Saturday morning’s qualifying, Michael would start TCR Round 11 in third position. When the green flag flew, Michael immediately moved into second place and applied pressure to pole-sitter Ryan Eversley the entire 18 laps before having to take the runner-up finish at the historic 3.4-mile, 11-turn road circuit.

Michael’s No. 98 BHA Hyundai i30 N TCR machine looked to be in position to make the important move to the lead with just a few laps remaining Saturday. He worked the low line and the high line and actually pulled ahead briefly of Ryan Eversley in his attempt to grab the lead. However, Ryan was able to hold off Michael at the finish line for the victory. 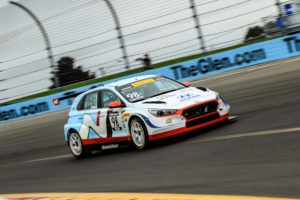 After facing a mechanical issue soon after the start of Round 12, Michael Lewis rejoined the field at the back and worked his way up through the field, passing cars lap after lap.

“That was a fun race,” Michael said. “It was a really good time to race that way against Ryan [Eversley] and have that level of trust between us, especially going into some brake zones. So, congratulations to him and his team. We had the first objective to get one point for fastest lap and we did that. The next item on the list was to try to win the race.

“That was a little bit harder and I did have the car to do it,” Michael continued. “But I just couldn’t make it happen. There was some overlap from Ryan’s lines to mine and I tried to use that to my advantage. Ryan was great in the first few turns, but then it started to go my way on the other half of the track. That’s where I would try to set up a run for three or four laps in a row. I had a few opportunities and one was a really good one, where I was actually in front for a couple of seconds. But, I just couldn’t hold it on the outside. It was a very fair race. It was a good points day, a fun race, and it was good to get the fast lap point to start on pole for Sunday’s race.” 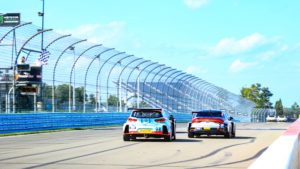 Michael Lewis finished fifth in Round 12 of the TCR inaugural season of the PWC.

Both Michael and Mark entered Sunday’s TCR finale with chances for the Drivers’ Championship with Michael starting from the pole position and Mark starting fourth. However, both BHA competitors were hampered in the final race with mechanical issues.

Michael had to pit early for repairs and he eventually drove back toward the front to finish fifth in Sunday’s TCR race. In addition, Michael set the race’s fastest lap with an average speed of 102.82 miles per hour. 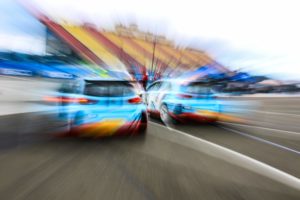 “I got a great start and the car was running well,” said Michael. “But we lost power and I had to pit. The Bryan Herta Autosport guys got to the problem quickly and I was able to get back out on the track without losing a lap. I fought my way back up to fifth and collected some points. Overall, I’m very proud to be part of a championship effort like BHA in winning the team title as well as taking Hyundai to the Manufacturers’ championship. It was a super season.”

In the final Drivers’ points, Ryan Eversley finished with 276, followed by Michael at 259, and Mark at 229.

All of the Pirelli World Challenge champions will be honored on December 5 in Indianapolis, Indiana. 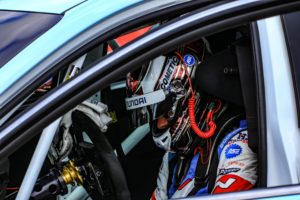 Michael Lewis thanks his personal sponsor team of ASE and Cometic Gasket, Inc., and Bryan Herta Autosport and Hyundai for their work in aiding him to earn second place in the 2018 TCR Drivers’ Championship.