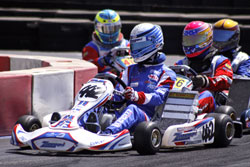 Michael Lewis went back to his roots for a weekend of kart racing at the CHAMPIONSHIP KART INTERNATIONAL Grand Prix held this past weekend at CalSpeed Kart Track in Fontana, California. “I wanted to get tuned up for my next Formula BMW race this coming weekend at Elkhart Lake and the timing was perfect with the inaugural running of this CKI event at the CalSpeed Track so I brought our Zanardi kart out of mothballs and went out and raced with the best karters around,” Lewis said. 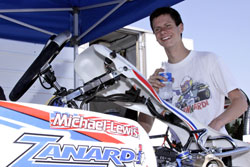 It took a while to get going but after each practice session the times started to improve and by Sunday morning Lewis and his mechanic found the setup sweet spot, and Lewis vaulted to the top of the speed charts.  Lewis started 12th in the 12-lap pre-final and worked through the pack for a strong seventh place finish.  For the 22-lap main event Lewis started seventh and at the green flag unfortunately slipped back to 13th because of a jam up in the first turn.  He worked hard to get back to seventh by the checkered flag.  “It was a fun day and it was good to get back in the kart and race with all the CKI drivers, and I am looking forward to going to Elkhart Lake for the Formula BMW race,” exclaimed Lewis.

Lewis will be driving for Team  Eurointernational at the Elkhart Lake event, and he is currently listed in second place in the Formula BMW Rookie Championship.