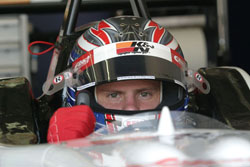 Laguna Beach, California (August 5, 2011) — American Michael Lewis will start in pole position for Round 7 of the Formula 3 Italia Championship at Spa-Francorchamps on Saturday, August 6.

Michael ran up front during practice, which carried over into qualifying. He qualified second fastest for Round 7, but Kevin Giovesi, who set the fastest time, was penalized for “not respecting track limits” and will start in 10th, therefore moving Michael into the P-1 starting spot on the grid.

“We came to Spa with much enthusiasm and had a plan of attack to do well this weekend,” said Michael. “Our team worked diligently and earning pole represents that hard work from the entire Prema Powerteam. It’s important that our sponsors share in this moment with us, especially our primary sponsors Eibach and K&N.” 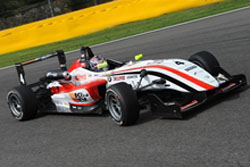 This weekend will be the first visit to the track in Belgium for the Italian Formula 3 Championship, but Michael competed last season at Spa, qualifying 3rd in a Formula BMW event.
Round 7 of the Formula 3 Italia Championship will take place on Saturday afternoon while Round 8 will occur on Sunday morning. The top-eight starting positions for Round 8 are determined by inverting the top-eight qualifiers for the previous race, which means that as pole-sitter for Round 7, Michael will start in eighth place for Round 8.