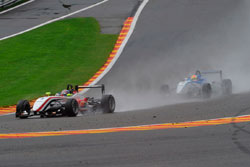 Driving his K&N Eibach sponsored Prema Powerteam Dallara, Michael came to Spa-Francorchamps this weekend in Belgium with high expectations for the next round of the Formula 3 Italia Championship Series.

On Friday, he qualified on the pole, which put him in the P1 position on the starting grid for the race on Saturday.

The race started Saturday at 4 p.m. Belgium time in pouring rain. However, the wet conditions did not deter Michael as he got a good launch from the start and led every lap, being closely followed the entire race by French driver Maxime Jousse. 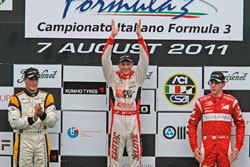 Round 8 in the Formula 3 Italia Championship Series will take place Sunday morning, August 7, at Spa-Francorchamps. Michael will start in eighth position because of an invert of the top-eight qualifying positions from Round 7.