Laguna Beach, California (September 19, 2011) — After participating in a recent Formula 3 Italia Collective Test Session with the PREMA Powerteam at the Vallelunga Circuit, in Italy, American Michael Lewis turned the experience he gained from that test to a podium finish this weekend at the same race track.

Michael and the PREMA Powerteam arrived at Vallelunga on Friday, September 16, for Rounds 11 and 12 of the Formula 3 Italia Championship with high expectations. In the previous week’s team collective test session at Vallelunga, Michael tested well and finished the single day session in P-2.

“The PREMA Powerteam gave me a good car for the test and I felt confident for the upcoming race weekend that we could score some points toward the championship,” said Michael Lewis. 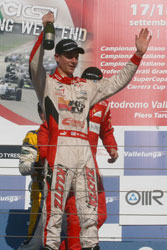 Qualifying
Qualifying for the Formula 3 Italia series took place mid-day on Saturday, September 17, in the hot sun at the Vallelunga

Circuit. On the first set of tires, Michael was a strong P-2 in the qualifying order. After the second set of tires were placed on Michael’s car, he was unable to improve his time and ended up qualifying P-3 with a time of 1:30.374.

“My goal was to do everything possible to qualify in the front of the grid for the Saturday race,” explained Michael. “I was hoping for P-1 but in the end P-3 was acceptable. As always, my engineer Fabio Zilio and my mechanic Marco Sbabo gave me a very good car and I tried hard to get a pole position time but just fell short of what I wanted to accomplish.”

Race 1
The first of the two Formula 3 Italia race events at Vallelunga took place late Saturday afternoon. Michael was positioned in 3rd starting position on the grid for Round 11. Michael made a clean start and managed to work his way through heavy traffic in the first turn and at the end of the first lap was in 3rd place. Michael maintained the pace of the leaders and after the 30-minute race he crossed the finish line in 3rd position to claim his 5th podium finish of the season.

“Our team worked diligently as we prepared for Vallelunga so I could have a strong finish in the first race, which I was able to do,” said Michael. “It feels good to get back on the podium and represent my sponsors as our team gained valuable points for the championship.” 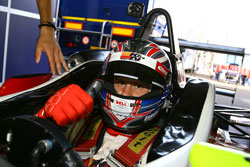 Race 2
Round 12 of the Formula 3 Italia Series took place early on Sunday morning at the Vallelunga Circuit. Because of the starting grid invert, Michael began the second race in 5th position. When the red lights went out to start the race, Michael made a strong launch and came out of the first-turn scramble in 5th position. The first six cars were in line for the first few laps but about halfway through the race Michael was passed by Maxime Jousse. At the end of the 30-minute race Michael crossed the finish line in 6th.

“We had a decent weekend here at Vallelunga and I was able to earn valuable points toward the Championship,” said Michael. “The Championship is close and I know my PREMA Powerteam will continue to give me a fast car so it is my responsibility to work hard and stay focused. I am looking forward to testing this Wednesday at Mugello and then racing there in two weeks.”

Summary
Angelo Rosin, Team Principal of the PREMA Powerteam, said, “I’m satisfied with the results scored today by our drivers, who stayed consistently on the podium in the last three rounds. They held on at some pretty difficult circuits like Spa-Francorchamps, Adria and Vallelunga. Again, we proved that our cars can be fast everywhere. Michael managed to rebound after his tough break at Adria and he was back on the podium, which is important for both the rookie and overall rankings.”

The 2011 Formula 3 Italia Rookie Championship is an even closer race as Michael is currently listed in 4th position with 113 points and he trails Brandon Maisano the current leader by just 13 points.

The next Formula 3 Italia Championship series event will be at the Ferrari-owned Mugello Circuit, October 1 and 2. 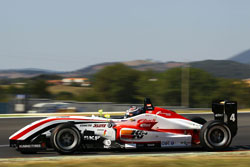