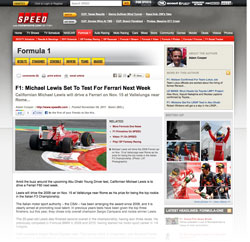 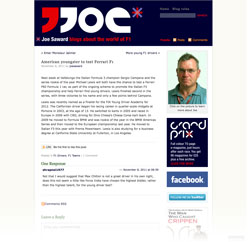 Laguna Beach, California (November 8, 2011) — The buzz in the motorsports industry is that an American has earned a test drive in a Ferrari Formula 1 car, and as a result, Californian Michael Lewis is receiving quite a bit of publicity for this rare and highly coveted opportunity.

By clinching the rookie championship in the 2011 Formula 3 Italia Series season, Michael, along with series champion Sergio Campana, were awarded the opportunity to test drive one of the most technologically advanced vehicles anywhere on earth. The test will take place on Tuesday, November 15, at the Ferrari-owned Vallelunga Circuit, in Italy.

Also, Joe Saward, who blogs about all things Formula 1, wrote about Michael, which can be viewed here.

Stopandgo.tv profiles the upcoming test on its website, which can be found here.