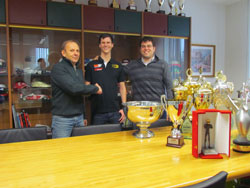 Laguna Beach, California — Twenty-one-year-old American Michael Lewis made a successful debut in the Formula 3 Italia Series in the 2011 season as he won three races that allowed him to clinch the Series’ Rookie Championship and finished just shy of taking the Series Championship title that was lost with just a few kilometers to go in the closing round of the 2011 Italian F3 Championship at Monza.

Michael Lewis and the PREMA Powerteam have agreed to another year together and will participate in the highly competitive Formula 3 Euro Series with Mercedes-Benz power with the objective to work hard and to give Michael every opportunity to compete for the Series’ championship.

The American racer quickly received accolades in the Formula 3 Italia Series this past season when he displayed great qualities and the ability to keep improving and building on his skills. He proved to be a great surprise not only for PREMA Team Principal Angelo Rosin and his squad, but also to all the series’ insiders. And as he has the ability to improve upon last season’s performance, PREMA did all they could to retain him for another season. Michael will make his debut in the 2012 Formula 3 Euro Series, April 27–29, at Hockenheim, while driving a Mercedes Benz-powered Dallara, to partner with PREMA’s returning driver Daniel Juncadella.

“It is great to be back with PREMA Powerteam for another season in Formula 3,” said Michael Lewis. “With the hard work from Angelo Rosin and René Rosin at PREMA, and Mercedes-Benz, our engine manufacturer partner, I am excited to race in the prestigious Euroseries F3 championship. 2011 was an exceptionally good year in my first season of Formula 3, and I look to continue that progression with such strong entities as PREMA and Mercedes-Benz.” 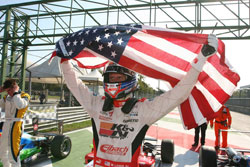 “Having Michael Lewis back with us was a priority after his excellent 2011 season in the Italian F3 Championship,” said Angelo Rosin. “His move to the F3 Euro Series is a logical consequence for him as well as for us. Michael is the kind of racer who can adapt to new situations pretty easily and I’m sure he won’t have any problems in being at the top of the European level, too.”

In addition to racing this season in the 2012 Formula 3 Euro Series Championship, Michael will also be entered by the PREMA Powerteam in three FIA Cup events for F3 cars that take place at Pau Grand Prix, Masters of Formula 3, and Spa-Francorchamps.

In 2012, the Formula 3 Euro Series Championship will consist of nine events, with all of them sharing race weekends with the popular international touring DTM series. The schedule is tentatively as follows: