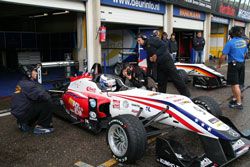 Zandvoort, The Netherlands (July 14, 2012) — After battling some unusual turns of events today, American Michael Lewis has qualified 9th for Sunday’s RTL GP Masters of Formula 3 race at the 4.307-kilometer Circuit Park Zandvoort in The Netherlands.

This morning when the teams and race personnel arrived at the race track during a heavy rain storm, the track’s grounds were flooded, which included the tunnel under the main straight that allows access to the paddock area. As a result, the teams had to wait outside the tunnel until the water was pumped from the tunnel to allow access to the pit area.

With the first qualifying session switching to Saturday afternoon, light rain was intermittent as the 20 drivers took to the track. Michael Lewis’s PREMA Powerteam K&N – Eibach Springs sponsored Dallara F312 with Mercedes power was fitted with Kumho rain tires for the very wet track conditions. On his last lap of the 10-lap, 20-minute session, Michael squeezed out his best lap time of 1:46.417 that placed him 10th overall. 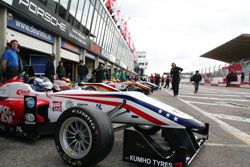 Michael came into the pit box for his second set of tires ranked 4th on the speed charts and the PREMA team quickly installed four new Kumho Tires. Michael went back out onto the track for four laps to better his time. When the session ended Michael’s best time was 1:32.779, which ranked him 9th for the second session and will give Michael the opportunity to start in the 5th row for Sunday’s F-3 Masters Event.

“My car was perfect with the first set of tires and I told my engineer to go ahead and put on the new tires and do not make any changes,” said Michael Lewis. “But something strange occurred with the second set of tires and I ended up with a loose condition. This hampered my ability to improve my time and I dropped down the charts as a result.  I have a good car and it is a long race on Sunday, so now I must concentrate on working hard to pass cars and earn a strong finish.”

The prestigious RTL GP Masters of Formula 3 event is considered one of Europe’s most important Formula 3 races because it attracts some of Formula 3’s best drivers at the event. Many successful Formula 1 drivers have competed in this special traditional event for F3 cars and drivers. A total of eight regular Formula 3 Euro Series drivers, including Michael Lewis, will start in the race’s top 10 tomorrow.

“I am excited about the opportunity to compete in the famous race with my PREMA team in my Mercedes-powered Dallara F312,” said Michael. “The PREMA team has worked hard all weekend to give our drivers everything needed to have a successful run on Sunday and I am looking forward to participating in this event at Zandvoort.”