Zandvoort, The Netherlands (July 16, 2012) — Some of the world’s best Formula 3 drivers, including American Michael Lewis, gathered this past weekend at Circuit Park Zandvoort for the 22nd running of the prestigious RTL GP Masters of Formula 3 event.

Michael qualified 9th on Saturday, which allowed him to start on the inside of the 5th row for Sunday’s 25-lap race at the 4.307-kilometer track in The Netherlands, located on the shores of the North Sea not far from Amsterdam.

Twenty Formula 3 drivers battled changing weather conditions over the weekend during practice and qualifying, including rain on Friday and Saturday, and intermittent showers Sunday morning, however, the weather improved in time for Sunday’s 2 p.m. feature race start time.

Michael’s K&N – Eibach Springs PREMA Powerteam Dallara F312 powered by Mercedes joined the other cars on the traditional warm-up lap and then settled onto the starting grid. The crowd of over 26,000 race fans filled the grandstands and the sand dunes surrounding the track as they anticipated the standing start. When the lights to start the race went out Michael immediately overtook two positions placing him in 7th at the end of the first lap. Unfortunately, Michael’s car became loose on the exit of the final turn leading to the front straight on the second lap. He lost momentum and was passed at the end of the straight and dropped back one position. For the remaining 23 laps, Michael was on the tail of British driver Alex Lynn and just ahead of 2011 Masters winner Felix Rosenqvist, with all three cars running in procession for the remainder of the race, with Michael finishing in 8th. 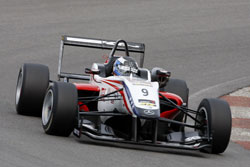 “This was a very exciting race and I enjoyed competing in this famous race for Formula 3 cars and drivers,” said Michael Lewis. “I made a really strong start and got up to 7th position but made a little mistake on the last corner of the second lap where Alex was able to slipstream me on the straight. I tried the rest of the race to make a pass but because of the high-speed corners, it is difficult to pass here. My PREMA Powerteam Mercedes-powered car was strong the entire race and I was able to run very competitive lap times right up until the race ended.”

Michael will enjoy a few days off from the rigors of racing and then his next appearance in the FIA Formula 3 series will be at Spa-Francorchamps during the July 26–29 weekend. Michael is optimistic about returning to the Belgium track where he earned his first Formula 3 Italia win in 2011.