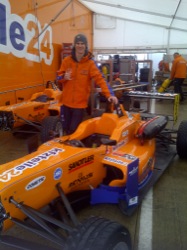 Friday, April 12
Round 2 of the FIA Formula 3 European Championship in Silverstone, England, began on Friday with Free Practice. After joining the kfzteile24 Mücke Motorsport team just one week ago, American Michael Lewis drove cleanly in the back-to-back 40-minute sessions that comprise Free Practice, even in full wet conditions. Michael ranked P1 for most of the final parts of the session, but was bumped down in the closing minutes where he finished P3. Michael and his engineer Peter Flückiger began working very well together from the start of the race weekend.

“We were just going to go out and feel the car lap by lap,” described Michael Lewis, a Laguna Beach, California, native. “By about the 4th or 5th lap, Peter was on the radio saying that I was up on the charts doing well. It was pretty awesome to be back with a strong pace in the wet conditions.” 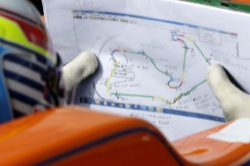 After Practice, track conditions changed, allowing Michael to try out his kfzteile Mücke Motorsport #5 Mercedes-Benz Dallara for the first time in the dry for the two-part Qualifying sessions. The first qualifying session, or Q1, determines the grid for Race 1 and Race 2 using the fastest and second fastest lap of the session.

“Peter and I had the same plan to just feel the car and really get used to the car more than anything,” explained Michael. “After about three laps I was getting back to my dry weather pace, but I was stopped short of my full potential because of a red flag and some additional yellow flags halfway through the 20-minute Q1 session. The red flag was the same for everyone, but it really hurt me a bit more as I needed every lap I could get in the dry to feel out the new kfzteile24 Mücke Motorsport car. I was very positive and hoped that Q2 would be wet, because I am confident in running on a wet track.” Michael ended up P18 and P20 after Q1. 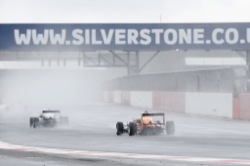 During the five-minute break to reset the clock and commence Q2, rain started to fall heavily and made the entire circuit completely wet. When the green light at the end of pit lane was illuminated, all drivers had to face a completely different situation. However, as it was raining very hard, the rain only lasted several minutes into Q2. As they were qualifying toward the back in Q1 due to particular circumstances, Peter and Michael decided to gamble and put on slick tires for the start of the Q2 session. This would mean that Michael would have to enter the fully wet race track hoping the track was dry enough at the end of the session. Michael drove well and managed to stay on track during the first part of Q2. Then with about eight minutes remaining in the 20-minute Q2 session, Michael’s lap times began to get faster.

“A bit of Sector 1 and nearly all of Sector 2 was starting to get relatively dry because that is the old asphalt area, so I was pushing as hard as I could there,” said Michael. “However, most of Sector 3 was still pretty much full wet. So it was intense to manage traffic with drivers on rain tires battling around me plus the normal risk/reward of the slicks on a wet track.” As the clock timed out, Michael’s lap times were getting dramatically better, and Michael posted a P13 finish to Q2. “I was pushing to get one more lap in, but missed the line by a few seconds, having completed that lap would have put me a couple of rows ahead. I was really enjoying driving in those conditions and liked that we tried to gamble for a top spot,” added Michael. 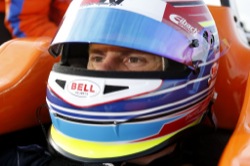 Saturday, April 13
Races 1 and 2 of Round 2 were scheduled for Saturday, as Michael and his kfzteile24 Mücke Motorsport team anticipated the changing weather conditions for each race, which remained mostly dry for both events. Michael started the first race in P20 but quickly began carving his way through the field until he reached P13. With some laps remaining, Michael had caught up to the lead pack but just ran out of time when he crossed the finish line.

“The car was handling well and I finally got to do some clean laps in the dry,” reported Michael. “My goal was to stay out of trouble, make no mistakes, and pass as many cars as possible. I think it’s safe to say that goal was reached.”

Only one hour after the completion of Race 1, Race 2 was scheduled to begin with threatening weather conditions, which could dramatically change the track surface. The track ended up being somewhat dry, but with humid spots spread throughout all sectors of the track. Starting now in P18 when the race began, 22-year-old Michael made another impressive start by placing his car in the best position on the track to avoid a number of crashes and make passes on that first lap. Amazingly by the second lap, Michael had worked his way up to P10. A safety car was then deployed on the second lap to adhere to all of the accidents. When racing resumed, Michael fought hard and was found battling for P10 (which is the last position that gives a championship point) for the remainder of the race. 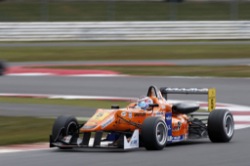 “The car was handling well and I just made one mistake by fighting a competitor for one position,” said Michael, “but ended up losing two places on the exit of Copse. I regrouped and put pressure on the driver in P10, but was unable to make a safe overtake in the end.” At the end of the 35-minute race, Michael had astonishingly passed many cars to finish P11. The kfzteile24 Mücke Motorsport team worked hard all day and had one more race to complete the weekend.

Team Boss Peter Mücke commented positively on the first two days of racing. Remembering that only one week ago, the fourth Mücke-cockpit was filled by the young American. Finishing Race 1 in position 13 (coming from 20th) and finishing Race 2 in position 11 (coming from 18th), without any test drives before the event in Silverstone, Michael also celebrated a sensational comeback at the free practice on Friday already with the third fastest lap time. Peter Mücke explained, “It is too bad that he (Michael) couldn’t implement that at the Qualifying, but to almost finish in between the top 10 coming from the back of the field is a great performance.” 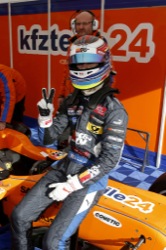 Sunday, April 14
For the final 35-minute race of the weekend, Race 3 proved to be a great chance for Michael to score his first championship points for kfzteile24 Mücke Motorsport, as Michael would start P13. If the Californian’s trend of good starts and great passing maneuvers continued, this would be an exciting race. With an early start time of 9:15 a.m., the circuit was cold and wet from the previous evening’s rain showers. However, when the race got underway, the track was neither completely wet nor completely dry. In fact, many drivers elected to use slick tires for the event, while other drivers opted for rain tires. Michael and his engineer, Peter Flückiger, decided to use slick tires to start the race.

“We were pretty confident with our choice before the formation lap, and once I passed through pit lane to take another lap I also agreed that the track was going to suit the dry tires the best,” said Michael. “The track was extremely wet in some places, especially in Sector 2 and Sector 3.” Once the lights went out to start Race 3, Michael made another terrific launch and battled hard into the Arena section and the Turn 6/Turn 7 complex. Michael was able to avoid three big crashes on the first lap, but unfortunately as he began to exit the Maggots-Becketts-Chapel complex toward the end of the first lap, Michael was crashed into from behind when another driver tried a dangerous overtaking maneuver. The competitor hit the rear crash box of Michael’s #5 kfzteile24 Mücke Motorsport car, immediately sending Michael off the track and into the muddy gravel run-off area, preventing Michael from continuing the race. 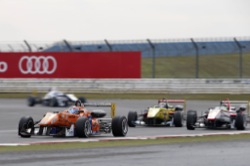 “There were a lot of accidents happening on that first lap and people flying off everywhere. I was able to make it through all of the accidents and was around P7 when I got hit off the track from another driver,” explained Michael. “It was very frustrating not to finish Race 3 because my guys were working so hard the entire weekend and they deserved a good result. It is just one of those racing situations that you can’t control and you just have to deal with other people’s mistakes.”

Michael was very pleased with the passion and work ethic of kzteile24 Mücke Motorsport, and he now looks forward to Round 3 (races 7, 8 & 9) of the FIA Formula 3 European Championship at the Hockenheim Circuit, which takes place May 3–5, in Hockenheim, Germany.