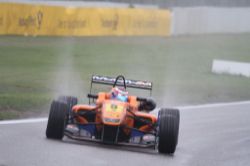 Hockenheim, Germany (May 6, 2013) — In only the second race weekend with his new team, American Michael Lewis and the kfzteile24 Mücke Motorsport team continue to form a relationship as they seek to deliver a strong performance in the 2013 FIA Formula 3 European Championship.

After joining the kfzteile24 Mücke Motorsport team after the first race weekend this season, Michael and the team continue to seek a balance with very limited seat time for him in the Dallara 312 chassis with Mercedes power. While not earning the results they had hoped for this weekend in Hockenheim, Germany, they did gain valuable experience working together, which will be helpful at the series’ next installment at Brands Hatch, England.

Friday’s Free Practice looked promising for Michael and the team as he finished in 12th position of 29 drivers at the end of both Free Practice sessions. 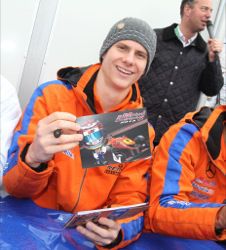 “The car felt pretty solid, and I even had 3/10ths of a margin as there was a long yellow flag in sector two preventing a larger lap time improvement on the new tires,” explained Michael Lewis. “It was a decent start to the weekend.” Michael next put his focus on qualifying, which took place later that afternoon.

Friday afternoon played host to two qualifying sessions. Q1 determines the starting grid for Race 1 and Race 2, which were both scheduled for Saturday. However, the track proved tricky for both the engineers and drivers alike as the track was completely dry in sectors 1 and 2, but in full wet conditions in sector 3. The challenging conditions actually benefited Michael at the start of Q1 as the American was in the top 5 over the beginning of the session.

“Our team chose to qualify on slick tires, so it was pretty fun to manage the half wet/dry conditions,” reported Michael. “However, once the track dried out, I struggled to get everything out of that last sector. In the end, the track was dry, but I was losing a lot of time in that last sector.” Michael ended up qualifying P24 for Race 1, and P25 for Race 2, in the 29-car field. “It was pretty frustrating to qualify at the back for Race 1 and 2,” he admitted. 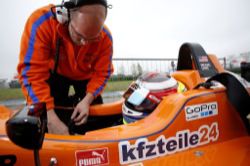 Just after the completion of Q1, Michael and the 28 other drivers returned to the track for the second qualifying session. Q2, which determines the starting grid for Race 3 on Sunday, took place in full dry conditions. While Michael improved his qualifying result compared to Q1, he had to settle for P20.

“It was definitely a poor result to start the weekend as I had higher expectations,” said Michael. “My kfzteile24 Mücke Motorsport guys deserve to be higher up on the grid.”

Saturday morning’s Race 1 began in the rain. Although Michael started the race in 24th place, he was able to work his way through the wet track conditions to finish 22nd.

“By starting so far in the back, it was a struggle to fight my way forward from all the spray and the incidents happening on the track,” said Michael. Although not pleased with his finishing position, Michael appreciated being able to gain more track time in the kfzteile24 Mücke Motorsport Dallara and finished the race. 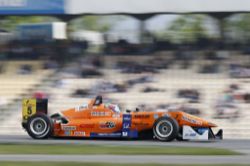 The erratic weather conditions continued to wreak havoc on the race engineers as Race 2, which took place early Saturday evening, occurred under full dry conditions. Michael started the race in 25th, but was able to pass several cars to earn 21st when the checkered flag fell.

“In the dry conditions, my pace was not the strongest, so I wasn’t passing cars left and right,” described Michael. “Both races today were a struggle. In the end, I finished both races higher then my starting position, but it wasn’t enough as we need to be higher up in the standings. I am still keeping a positive attitude and working hard with my guys to get as much out of this weekend as possible. It is important to always keep pushing and never give up during the race weekend. I believe in my kfzteile24 Mücke Motorsport team and know that we will deliver favorable results in future races.”

The dry track conditions continued for Sunday’s Race 3. This race featured Michael’s best starting position of the weekend in 20th, and he worked diligently to move forward in the field, ending his day in P16. 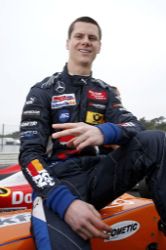 “It was a better result compared to the first two races for sure, but I was struggling on pace,” described Michael. “It is definitely frustrating sometimes to be back there, but that’s racing. I will apply what I learned from this weekend to races throughout this season.

“There are areas that I need to work on before my next race at Brands Hatch,” he continued, “and all I can do is look forward to that race and put this weekend behind me. I want to really thank the kfzteile24 Mücke Motorsport team, and especially the guys I work with, for staying enthusiastic and working hard just as they did in the last race at Silverstone. With only two races with this team, I can see the dedication and the positive attitudes of everyone.”

The fourth event weekend of the 2013 FIA Formula 3 European Championship will take place May 17–19, on the “Indy” Circuit at Brands Hatch, in England. Michael Lewis and the kfzteile24 Mücke Motorsport team are already hard at work to improve their performance.