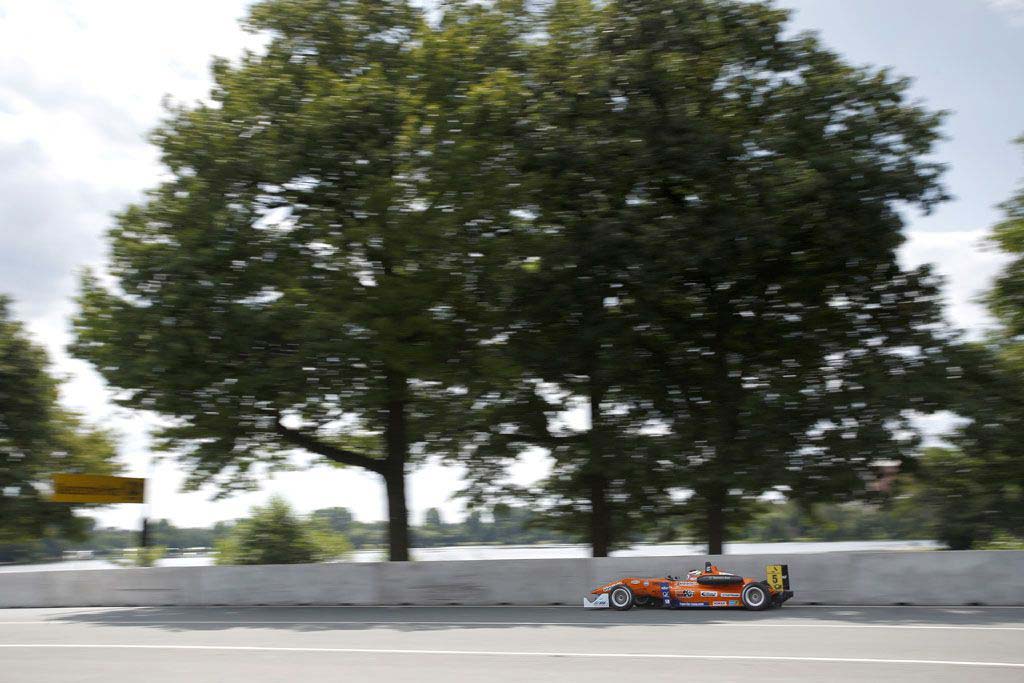 Rounds 16, 17 and 18 of the FIA Formula 3 European Championship kicked off the second half of the series’ season on Friday, July 12, when 28 drivers participated in the series’ free practice on the streets of Nuremberg at the Norisring circuit.

Michael and the other drivers faced a busy day that began with two 40-minute free practice sessions in the early afternoon, followed by two 20-minute qualifying sessions later in the day.

Michael’s race weekend started well in his kfzteile24 Mücke Motorsport Eibach Springs – K&N Engineering Dallara Mercedes by finishing the first 40-minute free practice session ranked 7th on the time charts. Although he slipped down the time charts to P12 for the second 40-minute session, he was pleased with the car’s performance and he was comfortable negotiating the tricky Norisring circuit with its few corners and two very long straights. 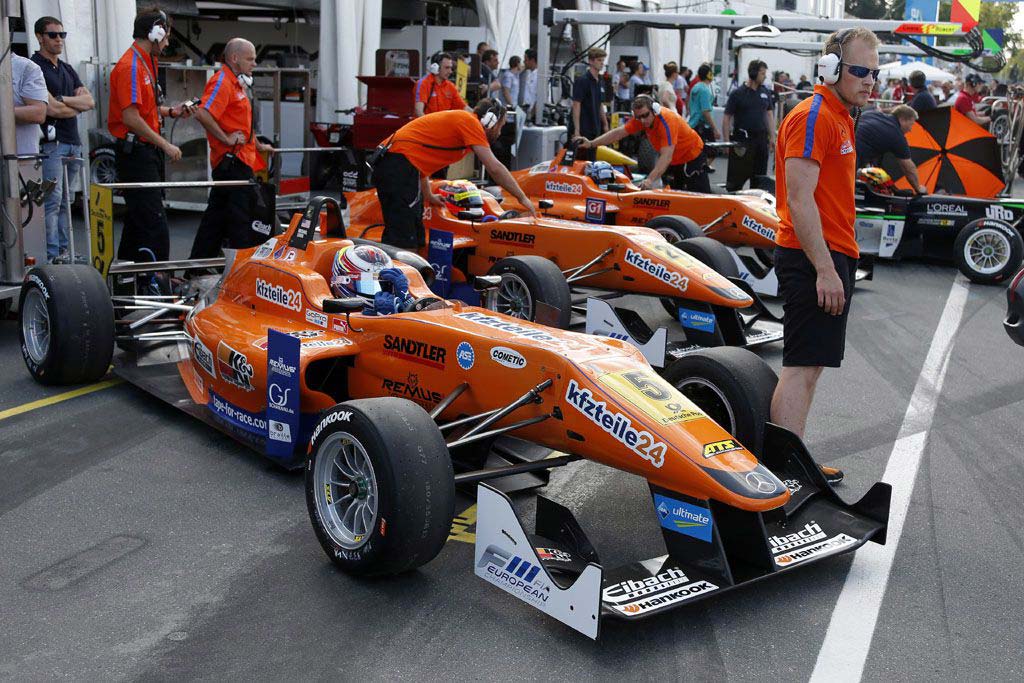 Late in the afternoon on Friday, the 28 FIA Formula 3 European Championship drivers brought their cars to pit lane to begin two 20-minute qualifying sessions. Because the series allows two sets of fresh tires for qualifying, the teams planned to use one new set of tires per session. Finding a clear track to set a fast lap was difficult for Michael during Qualifying Session 1, so he was unable to set a fast time during most of the session. However, with just two minutes left in the session, traffic was not as much of an issue so he turned a solid lap that placed him P12 on the time charts. After a short 10-minute recess the second qualifying session began with Michael finishing P13 on the time charts. Based upon his qualifying times in both sessions Michael would be scheduled to start Saturday’s Race 1 in 13th position, 12th for Race 2, and 13th for Sunday’s Race 3.

Rounds 16 and 17 were scheduled for Saturday, with the first race in the morning. A strong contingent of spectators filled the grandstands to watch the 28 FIA Formula 3 European drivers battle for position. As Michael sat in his F312 Dallara with Mercedes power waiting to start the race, he could not have imagined what was going to unfold over the next 35 minutes during the 42-lap race. 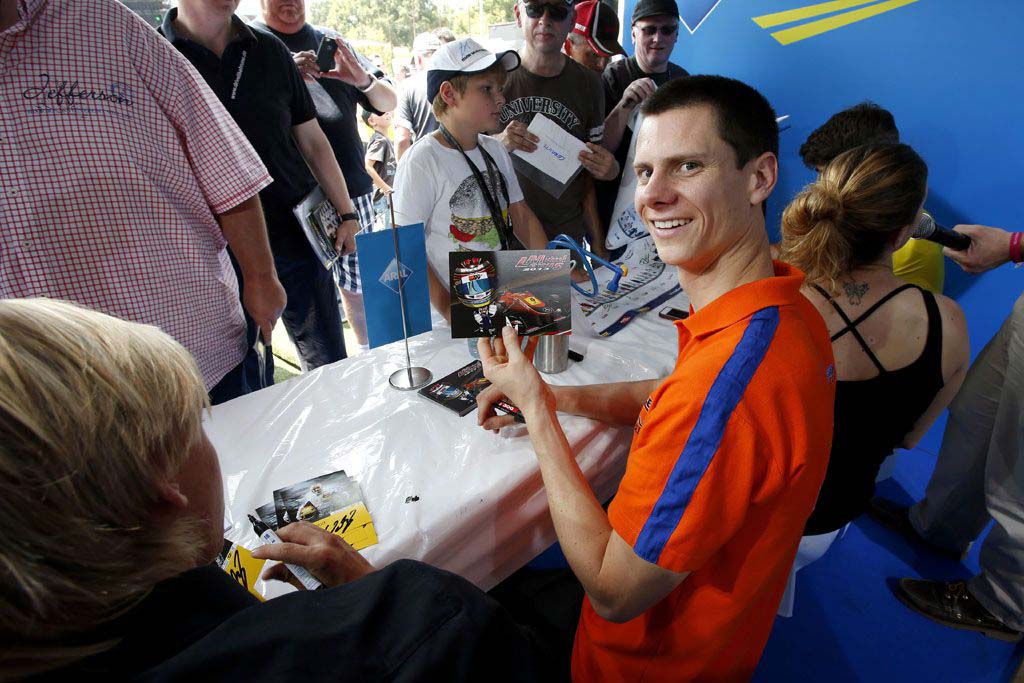 On the formation lap, Michael stalled his car, which prevented him from taking advantage of the 13th place starting position. As a result of the stall, he had to take the green flag while starting last on the grid. Fortunately, his team set up his car perfectly for the race, which allowed Michael to immediately start passing cars. After just a few laps he worked back up to P14 when he suddenly encountered another car in Turn 1. The marshals subsequently levied a drive-through penalty on Michael, which caused him to return to the back of the pack. Again, Michael began weaving up through the field headed to the front with the aid of a “safety car” appearance on the track. After the checkered flag waved, race officials gathered to determine the correct scoring because numerous penalties were given to many drivers who did not reduce speed during a local yellow flag late in the race. As a result, Michael finished 10th in Race 1.

“I made a mistake on the formation lap and stalled the car as I tried to leave the grid box,” explained Michael Lewis. “That put me in a really bad position as the rule states I must start last, which I did. My kfzteile24 Mücke Motorsport car was perfect, allowing me to pass cars and quickly get back to where I would have been. Then I made contact with another car going through the tight Turn 1. The race director felt I was at fault, so he gave me a drive-through penalty. In the end I was able to salvage a top-10 finish and I knew that my car was good, but it was crazy out there.” 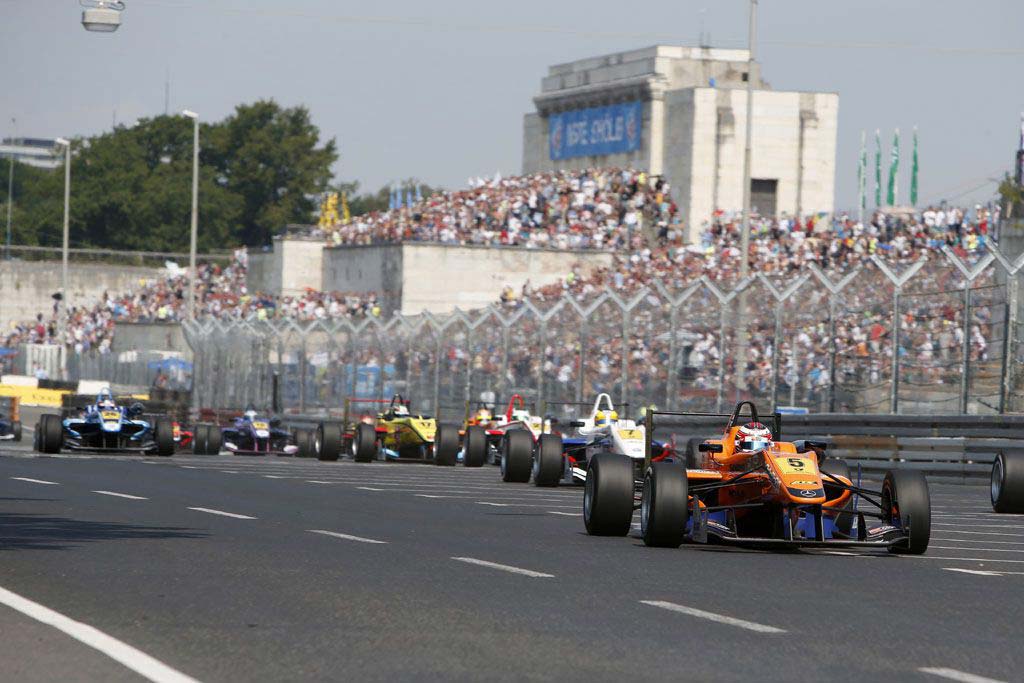 Late on Saturday afternoon the 28 Formula 3 cars were properly placed on the grid for the second race, with Michael’s kfzteile24 Mücke Motorsport Dallara with Mercedes power 12th on the grid. When the red lights went off to start the race Michael launched forward to begin the 42-lap race. This time all the drivers negotiated the treacherous first turn and first lap without incident. After a few laps, Michael was able to move up to P11, where he stayed for most of the race. Then on the last lap he negotiated a pass to claim another position and finished again in 10th.

“I had a good pace in Race 2, and everyone was running about the same speed,” said Michael. “I was gaining on the car in front of me and kept my focus, so with one lap to go, I set him up for the pass and finished the race in 10th.”

Bright and early on Sunday morning, before packed grandstands of nearly 100,000 spectators, the Formula 3 cars were placed on the starting grid with Michael’s kfzteile24 Mücke Motorsport Eibach Springs – K&N Engineering Dallara Mercedes in the 13th starting position. For the final race of the weekend Michael’s car was on used tires, which would be a slight disadvantage. Michael launched cleanly when the lights went out and immediately started moving up through the pack. On the second lap, without warning another car came flying across the apex of the tight Turn 1 hairpin and counterpunched Michael’s car amidships, spun him out and ended his race.

“I really got a good start and was in the process of lining up cars to pass when out of nowhere this driver slammed into me in Turn 1,” described Michael. “It really messed up my car and took me out of the race. I was looking forward to another good result because my car was again strong. I really like this Norisring circuit and wanted to come out of here with more points than I was able to earn.”

Michael Lewis showed promise this weekend despite the circumstances. He looks forward to his next race at Nürburgring, August 16–18, for Rounds 19, 20 and 21, of the FIA Formula 3 European Championship.