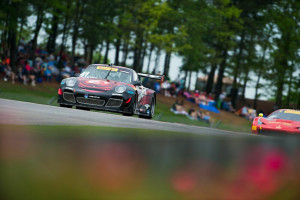 Round 6 of the Pirelli World Challenge proved eventful for Michael Lewis, who started P3, but unfortunately, a cut tire took him out of the race on the last lap.

Laguna Beach, California — After only five races into the 2015 Pirelli World Challenge (PWC) season, Michael Lewis’s “amateur” class title in the GTA division has been upgraded to GT due to his strong finishes so far this year. With this class change, Michael and EFFORT Racing showed speed throughout the recent Barber weekend.

Michael and the EFFORT Racing team made a quick turnaround after his fourth-place finish at the Toyota Grand Prix of Long Beach last Sunday, and arrived at Barber Motorsports Park in Birmingham, Alabama, on Wednesday for Thursday’s test sessions on the 1.38-mile road course, followed by practice on Friday. Saturday morning’s qualifying session for Round 6 proved to be quite eventful—and that was after the session ended. Initially it was believed that Michael set the 11th fastest lap of the qualifying session, however, a problem occurred with the transponders. Instead, Michael actually set the fourth fastest lap of the morning session. Additionally, one driver was penalized and had to move back on the starting grid for Race 1, which placed Michael in third to start Race 1. 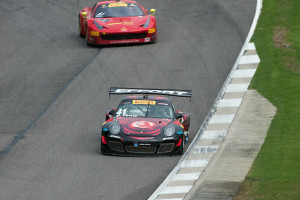 Michael Lewis is seen here at Barber Motorsports Park in the No. 41 EFFORT Racing Porsche 911 GT3 R as he leads a competitor.

Race 1
PWC officials called for a rolling start to the first race of the weekend. At the start, Michael battled for position and fell into fourth place. After a full-course caution, the green flag waved again, but Michael entered the first turn in sixth. He remained in sixth until a series of full-course cautions occurred late in the race. On the second to last restart, Michael was still running in sixth, and with only a few minutes left, another full-course caution was called as the 50-minute race time limit elapsed. Officials called for the race to end under green, so one more lap was given. However, during the final lap, one of the tires was cut on the No. 41 EFFORT Racing/Curb-Agajanian Porsche 911 GT3 R. This caused Michael to go off the course, dropping him back in the field, and finishing the race in 23rd position.

“It was an interesting first race,” observed Michael Lewis. “We were fighting up toward the front and having a good race. My teammate Ryan Dalziel was also really fast, and we both moved up through the pack to run nose-to-tail in P4 and P6. For some reason, the series decided to do an additional lap after the race officially ended, in which we were running in P6. Unfortunately, the left rear tire went flat while in P6 on this extra and final lap. On the restart, I had to basically let all the cars go by in Turn 2. It was hard not to finish the race after a strong run, but I must thank my EFFORT Racing team for really supporting me and putting me in the position for success.” 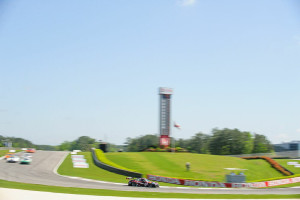 Barber Motorsports Park, in Birmingham, Alabama, played a significant role in Michael Lewis’s racing career. He participated in the Porsche Young Driver Academy on this road course in 2013.

Race 2
Starting positions for Sunday’s Race 2 were determined by the drivers’ fastest laps in Race 1. Michael started Race 2 in P10, and this race would use a standing start procedure. Off the line, Michael made a strong start and moved up to P8. After battling hard all race long, with 9 minutes remaining, the green flag waved for a final, single-file restart. Michael was able to quickly overtake two more cars on this last restart to finish the race in P6.

“The EFFORT Racing team worked really well together and remained strong through a lot of things that happened to me and my teammate this weekend, so I’m just really happy that we had a good showing through a lot of adversity,” said Michael. “Our Porsche 911 was really hooked up today. My engineer Stefan made a solid change to help with some more rotation from the first race to this race, and the car was definitely better and it showed. On the last restart, I was able to get two positions into the first and second corners. There was a bit of contact with the Cadillac, but it was just some hard side-by-side racing to the finish. We finished sixth overall and I’m happy with that; even in the first race we were looking to finish like that, too. We’ll work hard at the next race in Canada to keep pushing for more points!” 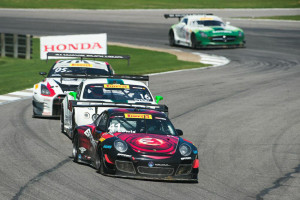 Michael Lewis leads a pack of cars in Round 7 of the Pirelli World Challenge at Barber Motorsports Park on Sunday, April 26, 2015. He finished the race in P6.

The MOMO Grand Prix at Barber Motorsports Park presented by Porsche is scheduled to air on CBS Sports Network on Sunday, May 3, at 2 p.m. EDT/11 a.m. PDT.

Michael and the No. 41 EFFORT Racing/Curb-Agajanian Porsche 911 GT3 R will next compete at Canadian Tire Motorsport Park, in Bowmanville, Ontario, Canada, May 15–17, co-headlining with the NASCAR Canadian Tire Series as part of the Victoria Day Speedfest.