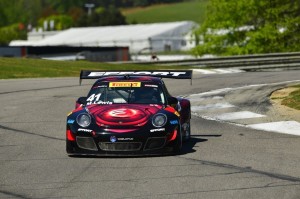 After a timing and scoring complication from Pirelli World Challenge, where Michael had been placed in 11th, he in fact qualified P3 overall. He set a 1:29.8 lap time, which was the fourth fastest lap of the qualifying session this morning. But after a penalty was issued to a driver ahead of him, Michael will begin Round 6 in third position.

“It was a pretty intense session out there with the intermediate conditions,” described Michael Lewis. “From the beginning, I was just following my teammate. We had a good pace and once we hit some traffic, it was about managing the tires and getting space. We were lucky enough to get some good space when the tires we were running were pretty hot. We threw a lap down in the moment, and that was pretty much all I could do. The car was solid, and I think we ended up fourth. Thank you to Porsche and to EFFORT Racing. The car is really good.” 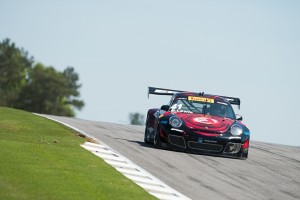 Michael Lewis attacks the elevation changes at Barber Motorsports Park in Birmingham, Alabama, during practice for Rounds 6 and 7 of the Pirelli World Challenge, on Friday, April 24, 2015.

After a stellar performance in last Sunday’s Toyota Grand Prix of Long Beach, where Michael finished fourth overall, the Effort Racing team arrived in Birmingham, Alabama, on Wednesday, to prepare for the MOMO Grand Prix at Barber presented by Porsche, part of the Honda Indy Grand Prix of Alabama weekend.

This road course played host to an important part of Michael’s racing career because it is where he participated in the second annual Porsche Young Driver Academy in 2013. The two-day event included on- and off-track instruction from legendary racer Hurley Haywood, as well as drivers Patrick Long and Andrew Lewis. As a result of Michael’s stellar performance at that event, he earned a scholarship from IMSA, Porsche and Yokohama Tire to participate in the IMSA Porsche GT3 Cup Challenge USA by Yokohama series in 2014, where he won four races and finished third overall.

Michael Lewis and the No. 41 EFFORT Racing Curb-Agajanian Porsche 911 GT3 R will start Round 6 of the Pirelli World Challenge in 3rd position on Saturday morning, April 25. Round 7 is scheduled to take place Sunday morning. Photo credit: Josh Chin.

Following is the schedule for Michael Lewis and the EFFORT Racing team for the MOMO Grand Prix at Barber presented by Porsche:

Rounds 6 and 7 from Barber Motorsports Park are scheduled to air on CBS Sports Network, Sunday, May 3, at 2 p.m. EDT/11 a.m.