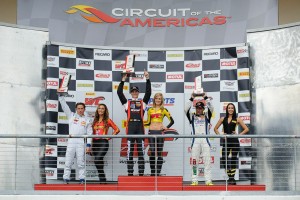 Michael Lewis on the Race 1 podium at Circuit of The Americas.

Lewis started the season at Circuit of the Americas with EFFORT Racing as part of Porsche’s Motorsport’s Young Driver Development Program. On his PWC debut weekend, Lewis picked up both GTA class wins, followed by another GTA win and a second place finish at the Grand Prix of St. Petersburg.  He picked up his 4th GTA win in Round 5 on the streets of the Grand Prix of Long Beach.

“We had no question of Michael’s level of talent when we selected him as our GTA driver,” said Stefan Pfeiffer, Technical Director of EFFORT Racing. “His performance so far this season, not only in the GTA field  but overall just shows what a great decision we made by adding him to our team and Young Driver Development Program with Porsche. We knew it would only be a matter of time before he was to move up to the GT class. At EFFORT, the integrity of our team is crucial to our mission. We came to win, but we also want to play fair with the other racers and work with the race series to race in the appropriate classes, based on our level of competitiveness. As part of our Young Driver Development Program, it also benefits Michael’s development to compete in a class where he can be challenged. The goal of this program is not to collect wins, but to make the most of every opportunity we have to develop his skills as a professional racer.” 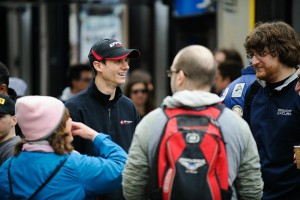 Lewis with race fans at Circuit of The Americas.

“We are pleased that Michael Lewis’ performance this weekend in the EFFORT Racing Porsche 911 GT3 R has enabled him to move from GT Amateur to the GT class for the rest of the season,” said Jens Walther, President and CEO of Porsche Motorsport North America. “Lewis, who had never experienced a standing start or run his Porsche against competitive marques before this season, and has driven like a veteran and showed that he belongs in the top class. Congratulations to EFFORT and Michael Lewis for this accomplishment.”

About EFFORT Racing
Pirelli World Challenge team EFFORT Racing was founded in 2012 with a simple goal: to be Champions, both on and off the racetrack. In doing so, EFFORT seeks not only to win races, but to spread an uplifting and encouraging message of hope. The team strives to infuse God’s integrity and standards into the passionate and exciting world of racing. At EFFORT Racing, every member of our team comes to win. From our drivers, to our crew, to the folks behind the scenes, the EFFORT Racing family knows that every member of our team is crucial to a winning racing organization.

From Kelly Brouillet and EFFORT Racing.