Laguna Beach, CA — Encouraged by a large presence of his family, friends and supporters, Michael Lewis gave the crowd a reason to cheer by winning the GTA division and finishing fourth overall in Round 5 of the Pirelli World Challenge, part of the Toyota Grand Prix of Long Beach, on Sunday, April 19. 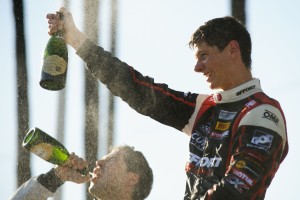 Michael grew up in Laguna Beach, California, which is only 30 miles southeast of Long Beach, and often attended the annual race event. But this year, he accomplished a major goal of his racing career by competing at the famed temporary street circuit.

“It was truly incredible to be running in the Top-4, and battling for an overall podium at the end of the race. My teammate finished just ahead of me, in third place, so it was really an incredible day for Porsche! Thank you to EFFORT Racing for providing such a great race car; their hard work and preparation is what made this result happen,” says Michael Lewis. 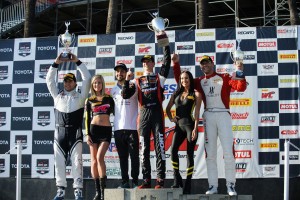 Michael arrived to the race track Friday morning to a finely prepared No. 41 EFFORT Racing/Curb-Agajanian Porsche 911 GT3 R for the morning’s practice session. Undaunted by the legendary 11-turn, 1.968-mile street course, Michael immediately began setting quick lap times in the 45-minute session. He finished the session with the 11th fastest time of 39 drivers, which is admirable considering this was the first time he ever drove a race car on this track.

Saturday morning’s typical 30-minute qualifying session was actually divided into two 12-minute sessions: The first group included the 19 drivers with the fastest practice times, while the second segment allowed the remaining field to qualify. As part of the first qualifying segment, Michael set a fast lap of 1:20.162, which would be the seventh fastest lap of the field, and the fastest of the GTA category. This would place him in seventh starting position for Sunday afternoon’s main event. 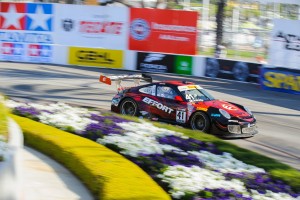 While qualifying concluded the on-track portion of Saturday for EFFORT Racing, the team welcomed race fans to their paddock area for a tour of the cars as well as meet the drivers and team members. Shortly after the tour concluded, Michael participated in an autograph session allowing him to interact personally with fans, and to catch up with acquaintances.

As part of the Toyota Grand Prix of Long Beach, the Pirelli World Challenge ‘Roar by the Shore’ presented by Replay XD main event took place soon after the conclusion of the Verizon IndyCar Series. Due to a penalty incurred to another driver, Michael’s starting position for Sunday afternoon’s race was upgraded to sixth. After the starting lights went out to begin the race, all the drivers battled for position, but Michael lost one spot and entered the first turn in seventh position. As the field of cars began to battle on the race course, a full-course caution was instituted due to a stalled car on the starting grid. After several more caution periods, Michael was running in eighth until a battle between the leaders resulted in the top-two positions crashing and leaving the race, which moved Michael to sixth. After another caution period due to several cars blocking in the hairpin turn that leads to the front straight, the race finally went green again with just over five minutes remaining. Michael was anxious to move up positions and quickly saw the opportunity when the green flag waved and he went outside in a three-way battle for position. Michael overtook two cars and entered Turn 1 in fourth place. His teammate Ryan Dalziel was running in third position and the two eventually finished the race in third and fourth, respectively. As a result of Michael’s finish, he earned another win in the GTA class of the Pirelli World Challenge. 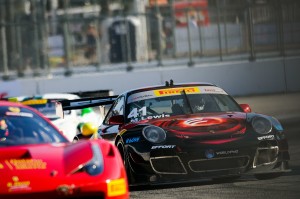 “It’s been a really great season in the Porsche so far, and I want to thank my team owner Mr. Chuck Toups, who is always enthusiastic, as is the team,” exclaimed Michael Lewis after climbing out of his race car. “Honestly, the fourth place overall I wasn’t really expecting. I was driving around in seventh, and focused on the GTA race with Martin Fuentes who was pressuring me on the restarts. The wide track into narrow spaces made it a challenge to work through. And with those corners were some tangles around me. With all of the restarts, we were just trying to survive. I am really pleased on the win in front of my home crowd. Congratulations to my teammate Ryan Dalziel on his podium. The Porsches are really hooked up. I can’t thank my team enough for the support on the restarts.” 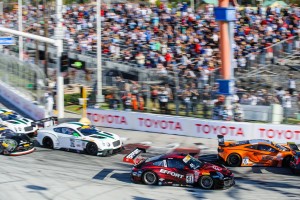 Michael and EFFORT Racing team won’t have much down time this week as they head to Barber Motorsports Park, April 24–26, for Rounds 6 and 7 for the MOMO Grand Prix at Barber presented by Porsche, part of the Honda Indy Grand Prix of Alabama weekend.