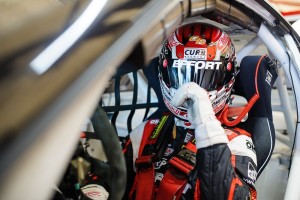 Preparing for qualifying at Canadian Tire Motorsport Park, Michael Lewis gathers his thoughts, and afterward earned a 9th-place starting position for Round 8 of the Pirelli World Challenge.

Laguna Beach, California — Part of an ultra-competitive field at Canadian Tire Motorsport Park in Bowmanville, Ontario, Canada, Michael Lewis and the No. 41 EFFORT Racing/Curb-Agajanian Porsche 911 GT3 R earned a top-8 finish for Round 8 of the Pirelli World Challenge on Saturday, May 16.

Starting with Friday’s practice and qualifying sessions, both EFFORT Racing Porsches of Michael Lewis and Ryan Dalziel set competitive times with the rest of the 29-car field consisting of drivers in both the GT and GTA categories. At the conclusion of Friday’s qualifying session, Michael Lewis set a qualifying time of 1:15.958, not far behind the pole-sitter’s lap time of 1:15.296, which placed him 9th on the starting grid for Saturday’s first race of the Pirelli World Challenge weekend 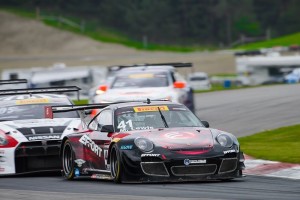 Michael Lewis and the No. 41 EFFORT Racing/Curb-Agajanian Porsche 911 GT3 R lead a pack of cars on Saturday, May 17. Michael finished the race in 8th position.

Race 1
From a rolling start, Michael was able to methodically pass up to the 8th position in his EFFORT Racing Porsche 911 GT3 R from the start during the Saturday afternoon race. Passing overall was generally difficult on the 2.459-mile Canadian road course, and thus Michael crossed the finish line in 8th place. In addition, there were two, long safety car periods that definitely set the tone of the race. Michael’s lap times were competitive throughout the race and his fastest lap was clocked at 1:17.964, with the fastest race time of 1:17.237.

“Our car was quite good on the long run, and just as we started to creep up onto the few cars ahead of us, a full-course caution would happen,” explained Michael Lewis. “Thus, on the restarts I had to defend quite hard until I could break away and then start working on the guys in front of me. Our Porsche 911 GT3 R was set up well by my EFFORT Racing guys, and we just needed some more green flag running to try and get a few more positions.” 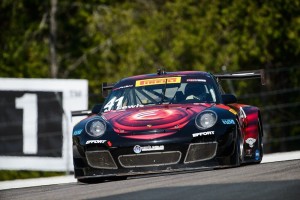 Round 9 of the Pirelli World Challenge at Canadian Motorsport Park proved challenging for Michael Lewis. Although charging through the field, toward the end of the race he encountered traffic and received contact on the car, dropping him back to finish 12th.

Race 2
Michael and the EFFORT Racing team regrouped for Sunday afternoon’s race, where he would start the race P10 for a standing start. For reference, qualifying for Race 2 is determined by a driver’s fastest Race 1 lap time. As all the drivers fought for position after the race started, Michael fell to the 11th position. After about six laps of racing, a full-course caution came out, and after the green flag waved to restart the race, Michael quickly moved up to 8th. Michael and his teammate Ryan Dalziel were running nose-to-tail in the 9th and 10th positions during the closing laps of the race, however, with roughly 4 laps to go, Michael received left side damage to his Porsche 911 GT3 R while driving through lapped traffic that resulted in a loss of pace. Michael eventually finished the race P12. Michael’s fastest lap of the race was 1:18.070, with his teammate Ryan clocking a 1:18.001, both just under one second behind the fastest lap time.

“We had a pretty eventful second race,” said Michael. “We finally got to do some green racing in the Pirelli World Challenge, and the race went green for a solid 40 minutes. After receiving some left-side damage from a side-by-side contact in lapped traffic, I had to slow my pace down to get to the finish. Ryan was strong at the end, and he went ahead to try and chase down the Ferrari, which was just in front of us at the time. My EFFORT Racing engineer Stefan Pfeiffer, crew chief Ricki Martino, car chiefs Paul Ashworth and Dave Gahagan, and our fuel and tire experts Reg and Foggy really provided us the best Porsche possible, and we just took it the max. It wasn’t enough for the win, but at least we’re trying really hard out there. Congratulations to Ryan on his charge today, and thanks to our awesome team owners Chuck and Melissa, as well our team manager Erin Gahagan for believing in us to get our cars as fast as possible.”

Michael Lewis enjoys interacting with fans, and he gladly offers his autograph to this young fan at Canadian Tire Motorsport Park.

Both EFFORT Racing drivers pushed their well-prepared Porsche 911 GT3 R race cars to the limit in both races, but circumstances led to the top-10 results for Michael on Saturday with an 8th, and Ryan on Sunday finishing 9th. The entire EFFORT Racing team is diligently preparing for the series’ next race event, Chevrolet Belle Isle Detroit Grand Prix, May 29–31.

Rounds 8 and 9 of the Pirelli World Challenge from Canadian Tire Motorsport Park are scheduled to be broadcast on CBS Sports Network, May 24 at 5 p.m. EDT/2 p.m. PDT.