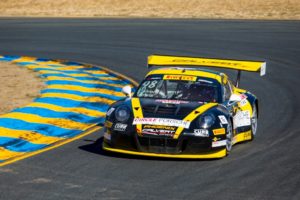 Driving the No. 98 Calvert Dynamics / Curb-Agajanian Porsche 911 GT3 R, Michael claimed a 5th- and 6th-place finish respectively in Rounds 18 and 19 of the road race series, during last weekend’s visit to Sonoma Raceway in Northern California.

Michael and the Calvert Dynamics race team began the weekend with competitive lap times on the 2.385-mile permanent road course during practice on Friday, September 16. After Saturday morning’s qualifying session, Michael set the 6th fastest time with 1:32.576, just three-tenths of a second behind the fastest qualifying time. This set the field for that afternoon’s Race 1 of the weekend, with Michael starting on the outside of Row 3. 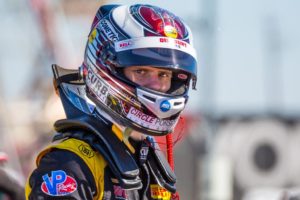 Michael Lewis returned to his home state of California and drove to two solid performances in the Pirelli World Challenge. Photo from Porsche Cars North America.

As the green flag waved to begin Race 1, the front of the field held their positions and everyone made it through the first few turns with no contact. As the race progressed, Michael kept pace with 5th-place driver Jon Fogarty, and made his move to pass for the position with a handful of laps left in the race. Michael then quickly chased down the 4th-place driver and they battled side by side on the final lap, with Michael nearly getting the position. Michael crossed the finish line just behind in the 5th spot. 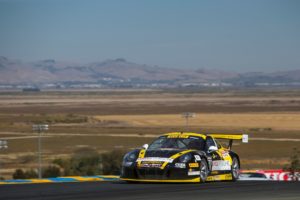 The No. 98 Calvert Dynamics / Curb-Agajanian Porsche 911 GT3 R performed flawlessly for Michael Lewis at Sonoma Raceway, on September 17 and 18. Photo by Brian Cleary.

During Race 1, Michael set the 6th-fastest lap, which placed him in the 6th starting position for Sunday’s Race 2. As the green flag waved to begin the second race, Michael made another clean start, and was fighting hard in the first few corners with the front of the pack. He gained a position to put himself up into 5th place when a few competitors made contact just in front of him in Turn 6. From that point on, the race consisted of a follow-the-leader format, with not much change in positions, until about 20 minutes left. Michael battled with former teammate Patrick Long for the position, with Patrick just sliding by Michael in the esses to take 5th. Michael finished the race in 6th place. 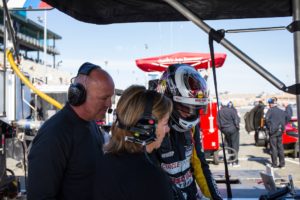 “In each session this past weekend in Sonoma, our Porsche 911 GT3 R was performing well,” explained Michael Lewis. “It was nice to have solid performances for the many interested fans who attended the race. Our car was balanced in free practice, and after letting the track get worked in during those sessions, we made nice changes on it for Qualifying. To be honest, everything seemed to run smoothly with the way we were working, and it resulted in strong finishes in Qualifying, Race 1 and Race 2. Being the top Porsche in the field was nice, and we held that status all weekend; except in Race 2 where we received some contact. Our results are a testament to our engineer Stefan Pfeiffer and the mechanics doing their jobs well. The results are also from the team’s shared idea of always having fun in what we do; after all, we get to play with some pretty incredible machinery! It was also great to see the many new Porsche teams enter the championship and participate this past weekend. For now, we will take in all of the gathered information from Sonoma, and work to use it for more strong runs in the last race held at Laguna Seca. Thank you to Calvert Dynamics, Circle Porsche of Long Beach, Discount Tire, Curb Records, The Smile Generation, ASE, Cometic Gasket, Inc., CXC Simulations, and The Texas Liver Institute for providing the wonderful opportunity to compete and race hard during each event.” 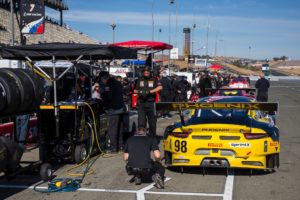 The Calvert Dynamics race team prepared a top-running Porsche for Michael Lewis in the Pirelli World Challenge at Sonoma Raceway, and the team anticipates their final round of 2016 next month at Mazda Raceway Laguna Seca. Photo by Halston Pitman, MotorSport Media.

GT Rounds 18 and 19 of the Pirelli World Challenge are scheduled to air on CBS Sports Network on Sunday, September 25, beginning at 4 p.m. EDT / 1 p.m. PDT. The PWC season concludes next month at Mazda Raceway Laguna Seca, October 7–9, with Round 20.