Tooele, Utah — Just shy of a podium appearance, Michael Lewis finished 4th in Round 17 of the Pirelli World Challenge on Sunday, August 14. In addition, he joined team owner and fellow driver Preston Calvert on the top position of the podium in two Pirelli World Challenge SprintX races last weekend, all at Utah Motorsports Campus. 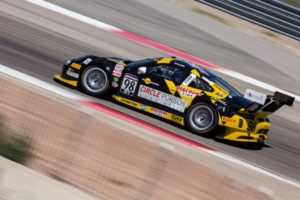 Michael Lewis set the fastest lap of Round 16 of the Pirelli World Challenge (PWC) in the GT category on Saturday, August 13, which allowed him to start first in the second race of the weekend on Sunday.

Qualifying for Round 16 of the GT and GTA field kicked off the schedule on Saturday morning, August 13. Of the 23 competitors, Michael set the ninth fastest lap time in the No. 98 Calvert Dynamics/Curb-Agajanian Porsche 911 GT3 R, which placed him on the inside of Row 5 to begin that afternoon’s first race of the weekend.

As the field approached the green flag to begin Race 1, Michael immediately passed some cars on the straightaway. However, as he approached the first turn, unfortunately, he made contact with a competitor and then spun. Thankfully, his car was not damaged and the field avoided his stranded car. Michael, however, wasn’t able to immediately fire up the car again. The field of cars passed him on the 3.048-mile road course, and when the race went green again, he had to restart at the back of the field. As Michael stayed clear of other battles on the track, he was able to make up time, and actually set the fastest lap of the race. Michael finished the race in 22nd position. 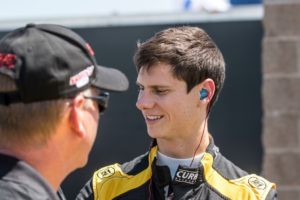 After starting on pole for Round 17 of the Pirelli World Challenge, Michael Lewis just missed a podium finish by crossing the finish line in 4th.

The starting grid for Sunday’s Race 2 was set by each driver’s fastest lap time during Race 1. As a result, Michael started the race on the pole position. He led the field to the green flag for the rolling start but as they shuffled for position in the first turn, he dropped back to second. He remained in second place for a few laps, but the cars in third and fourth worked together and were able to battle by Michael, who then settled into fourth position. Michael was in this four-car train that separated itself from the pack. As the top-four cars were all expertly prepared and running closely together with no driver making a mistake, the four drivers remained in their positions. Michael crossed the finish line in fourth at the conclusion of the race which saw no yellow flags.

“It was nice to finish in a strong way on Sunday after the race we had on Saturday,” said Michael Lewis. “Starting on pole, we wanted to get a win. I am bummed for the team that we didn’t finish on the podium because they worked so hard to prepare the car, but this was the highest finish for the team in GT, so I am happy about that.” 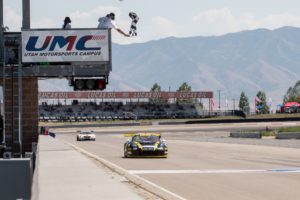 Michael Lewis crossed the finish line first on Saturday, August 13, 2016, as he and team owner and co-driver Preston Calvert shared driving duties in Rounds 3 and 4 of the SprintX class.

But Michael’s driving duties weren’t solely classified to the GT races last weekend. Calvert Dynamics’ team owner Preston Calvert also competes in the PWC SprintX division, which is an endurance racing format featuring two drivers who compete in a one-hour timed race with a mandatory pit stop. Unfortunately, Preston’s No. 77 Porsche 911 that he shares with Andrew Davis, was unable to enter the races due to damages sustained in a previous practice session. As a result, the No. 98 Calvert Dynamics/Curb-Agajanian Porsche 911 GT3 R served double duty with Preston and Michael competing in the two 60-minute SprintX races.

Preston took the first leg of the driving duties in the SprintX Round 3. After Michael took over, he was 24 seconds behind the SprintX leader Kuno Wittmer. Michael set the fastest lap of the race as he methodically caught up to the leader. In brilliant fashion, Michael made a last-lap pass for the lead in Turn 5 and earned a 2.031-second victory over Kuno. 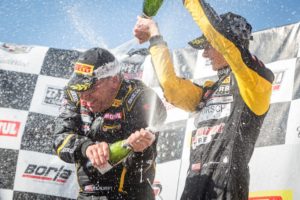 Preston Calvert (left) and Michael Lewis celebrate on the podium as they co-drove to two wins in the PWC SprintX category at Utah Motorsports Campus on August 13 and 14, 2016.

“When I jumped in the car, I just wanted to be consistent and run a solid pace,” explained Michael. “Then toward the end of the race, I was getting info from the team that we were closing quite fast. To be honest, I felt that the chance for a pass was going to be very last minute and on the last lap. I knew I needed to wait as long as possible until there was a time to pass. As soon as I saw the white flag, I thought I was closing rapidly then started setting up a strategy to make the pass. Kuno was doing a good job of defending and I knew he would make it hard for the pass. But I was able to get by in Turn 5. We had a clean pit stop and Preston did a good job early in the race. I saw a car in the distance after I jumped in and thought I might have a chance to close. It’s an exciting way to come back for the team.”

For Sunday’s SprintX Round 4, Michael took driving duties first along with the other pro drivers and set the pace of the field in the first 18 laps. When Michael turned the car over to Preston, he kept that lead and was able to bring the car home in first. 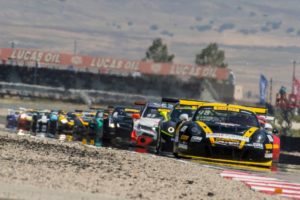 The No. 98 Calvert Dynamics/Curb-Agajanian Porsche 911 GT3 R served double duty in Utah as Michael Lewis drove the car in both the PWC GT and SprintX races.

“It was an emotional weekend for the Calvert Dynamics team,” said Michael. “Everyone banded together and adapted amazingly well to situations that were thrown at us during the weekend. At the end of it, we scored a P4 in the GT Race 2 with a pole for that race as well, and two victories in both SprintX races. After a GT Race 1 and its qualifying not going the way we wanted, we stayed calm and focused on the remaining parts of the weekend. My teammate Preston Calvert drove extremely well in both SprintX races to help our team get those victories. There were tears of joy from the crew after those wins. It was a pleasure to race with Preston, last minute, and to score a P4 in the GT race for everyone who put their sweat and tears into this program.” 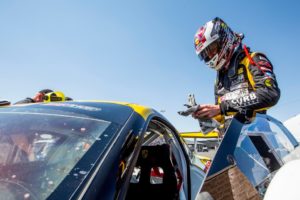 In addition to his normal driving duties in the GT class of the Pirelli World Challenge, Michael Lewis was able to participate in the series’ newest division, SprintX, with positive results.

The next Pirelli World Challenge weekend is set for September 16–18, at Sonoma Raceway with Michael competing in GT Rounds 18 and 19 in the No. 98 Calvert Dynamics/Curb-Agajanian Porsche 911 GT3 R.