Lexington, Ohio — By being strategic on the race track as well as avoiding contact with competitors, Michael Lewis earned 6th- and 8th-place finishes this past weekend in the Pirelli World Challenge’s visit to the Mid-Ohio Sports Car Course. 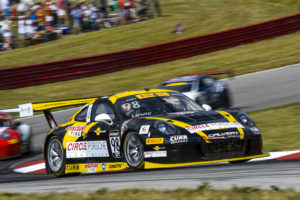 Michael Lewis had two solid results this past weekend at the Mid-Ohio Sports Car Course, finishing in 6th and 8th.

Michael and the field of GT, GTA and GT Cup competitors were to practice on the track on Friday, July 29, but the session was cancelled due to inclement weather. The weather cleared up for Saturday’s qualifying session beginning at noon, when Michael qualified 12th fastest of the 22 competitors, which placed him on the outside of Row 6 to start Saturday afternoon’s Round 14 of the Pirelli World Challenge. 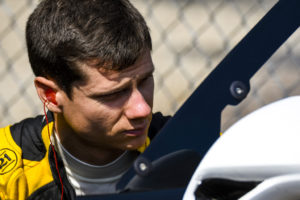 Michael considers his pre-race strategy on Sunday, July 31, prior to starting Round 15 of the Pirelli World Challenge in 6th position, which he also crossed the finish line in the same position.

Soon after the green flag waved to begin the race, three competitors were involved in an accident, bringing out a full-course caution on laps one and two. Michael immediately moved up in the field, and the race was later plagued by two more full-course cautions. However, Michael was not involved in any of the incidents and drove to an 8th-place finish.

Michael set the 6th-fastest lap of Saturday’s race, which allowed him to start on the outside of the third row for Sunday morning’s second race of the weekend. After the green flag brought the field of race cars up to speed, Michael lost one position as he battled for position. He dropped back to 8th, but through the course of the race, was able to regain those two positions, and crossed the finish line in 6th. 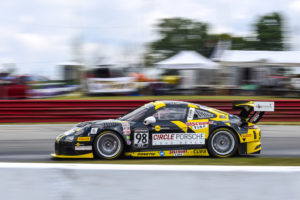 Michael drove the No. 98 Calvert Dynamics / Curb-Agajanian Porsche 991 GT3-R to the 6th fastest time of 22 competitors in Round 14 of the Pirelli World Challenge on Saturday, July 30.

“We had to really squeeze everything out of our Porsche GT3 R this past weekend to get around the tricky Mid-Ohio course,” explained Michael Lewis. “It was a nonstop effort to get our car competitive and ready for each session. Thank you to my team for continuing to develop the car to find every bit of performance we could for each session. We ended up salvaging decent finishes in both races. After looking at the qualifying order on Saturday morning, and at what type of race cars were ahead of us, we knew we would have a hard fight in the races. In the end, we were clean and tidy and that’s how we were able to finish where we did. It was encouraging to work with the team this weekend in the way we did, as each of us was looking for ways to improve. Next up is our race in Utah! Again, I must say a big thank you to Discount Tire, Circle Porsche of Long Beach, Curb Records, and many others for the past two race events. Now, Calvert Dynamics will be spearheading the rest the season and I’m forever grateful for that.” 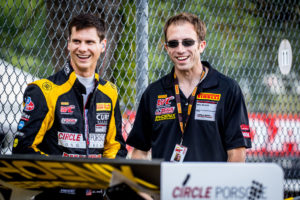 Michael and Calvert Dynamics team member Andrew Aquilante relax before the start of the race at Mid-Ohio Sports Car Course.

Michael will next compete in the No. 98 Calvert Dynamics / Curb-Agajanian Porsche 991 GT3-R at Utah Motorsports Campus in Tooele, Utah, on August 12–14.