Phoenixville, PA — Michael Lewis will complete the 2016 Pirelli World Challenge season with Calvert Dynamics in the No. 98 Porsche 991 GT3-R. Lewis signed with the team for the Road America and Mid-Ohio rounds, and today the team confirmed that he will also race for them at Utah Motorsports Campus, Sonoma Raceway and Mazda Raceway Laguna Seca in the GT class in the team’s Phoenix Prepared Porsche. 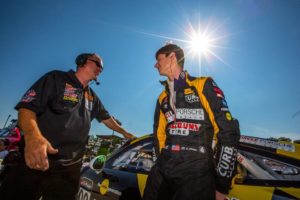 Michael Lewis will continue to campaign the No. 98 Porsche 991 GT3-R for the remainder of the 2016 Pirelli World Challenge season.

After a strong start to the Pirelli World Challenge season, including two wins at St. Petersburg, Michael found himself sidelined after EFFORT Racing took a hiatus from competition. Already running a GT Porsche team, Calvert Dynamics was a natural home for Michael, who made his debut with the team at Elkhart Lake in June as part of a two-race deal. That deal now runs through the completion of the 2016 season. Lewis will join alongside Preston Calvert, who has recently moved up to the GTA Class from GT Cup. At Utah Motorsports Campus and Mazda Raceway Laguna Seca, the team will also run the SprintX class, with Calvert partnering with Andrew Davis. 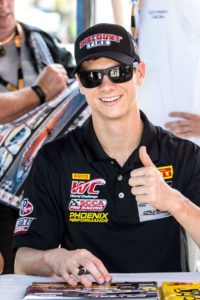 “Thank you to Dr. Preston Calvert and the Calvert Dynamics team for providing three additional races to finish out the season,” said Michael. “This was totally unexpected and I can’t thank Preston and his team enough for running our No. 98 Porsche GT3-R for more races. These events will be on the West Coast and it’ll be so nice to race in front of my local fan base and to share that with the team. Circle Porsche of Long Beach, Discount Tire, Curb Records, ASE, Cometic Gasket, Inc., The Smile Generation and many other notable partners were able to get me to Road America and to Mid Ohio.

“Thank you to them for initiating this second-half-of-the-season push to keep racing in the Pirelli World Challenge,” Michael continued. “I look forward to working with the Calvert Dynamics team session-by-session and race-by-race to earn strong results for the remaining events. That’s what we did at Road America and that’s the best way to get results. Calvert Dynamics stepped up in a big way and I am forever grateful to Mr. Preston Calvert and his entire crew for this opportunity.”

After a strong inaugural weekend with the team at Road America, Calvert is bullish on Lewis adding three additional race weekends. 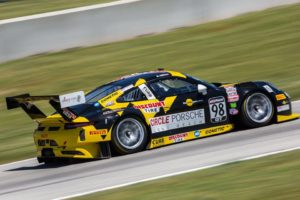 “We had our first race weekend at Road America with the combination of the crew of Phoenix Performance and Michael Lewis’s former EFFORT Racing group,” said Calvert. “The chemistry between these two groups of people was outstanding, and we all worked very well and smoothly together. The addition of Stefan Pfeiffer to the team as Race Engineer has brought fresh and steady leadership to the efforts of the crew working on the Phoenix cars. Michael Lewis is an outstanding young man, and a terrific racer, who is an excellent teammate.”

Calvert continued, “Because of this excellent experience at Road America, Calvert Dynamics has agreed with Michael Lewis to extend our arrangement with him and his group beyond the two race weekends initially conceived, and to support him for the remainder of the 2016 Pirelli World Challenge season, all the way to the finale at Mazda Raceway Laguna Seca. Michael has done a great deal to help his cause by engaging his sponsors to help support his racing effort, and we are happy to provide the remainder of the support needed to keep his season going. We will work together to develop sponsor support for Michael for the 2017 season and beyond.” 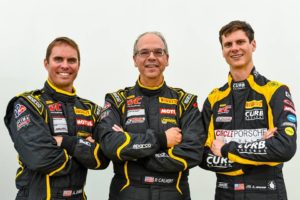 Phoenix Performance is a performance tuner, providing maintenance, tuning and diagnostic services for foreign and domestic cars and trucks, as well as performance upgrades and tuning for street and track cars. The PWC race team occupies part of the 32,000-square-foot race shop, which is located 30 miles west of downtown Philadelphia. Since 1999, Phoenix Performance has prepared over 35 SCCA Runoff winning national championship cars for customers.