Elkhart Lake, Wisconsin — After a two-event hiatus, Michael Lewis returned to racing competition in the Pirelli World Challenge Grand Prix of Road America and claimed a top-10 finish in Round 12 of the series championship. 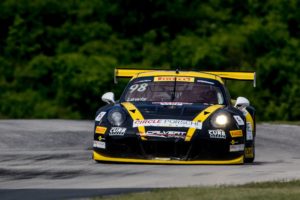 Michael Lewis claimed a 10th-place finish in Round 12 of the Pirelli World Challenge at Road America on Saturday, June 25. Photos by Brian Cleary. 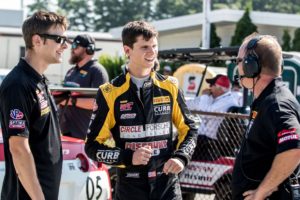 Race 1 began Saturday at 4:30 p.m. CDT with Michael starting on the inside of row 6, part of the 27-car field. Michael battled for position the first several laps and moved up to 10th on lap 13, where he remained at the conclusion of the 50-minute race.

Sunday morning, June 26, Michael lined up the No. 98 Calvert Dynamics/ Curb-Agajanian Porsche 911 GT3 R in 11th position for the start of Race 2, based on his fastest lap from Saturday’s race. However, the race started under caution due to a damp track from an earlier rain shower. The green flag waved with 45 minutes left of the 50-minute race, but soon after, Michael made contact with another car as they battled for position, which caused Michael to complete a drive-through penalty on pit road. Michael returned to the track in 24th position, but spent the rest of the race successfully passing cars, and completed the race in 14th position. 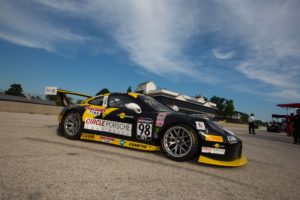 “It was a real pleasure to begin working with the Calvert Dynamics team from the first practice session on Thursday,” said Michael Lewis. “In every single session, through Race 2, the team developed the car nicely to give us a nice tool on the track. After some luck not going our way in qualifying, via some traffic, we worked hard to salvage what we could in Race 1. In our final race of the weekend, the car had good grip and it was a pleasure to drive. I made a move for the inside in Turn 1 on the restart and just couldn’t make it stick. I ended up making some contact with another competitor. Serving a drive-through penalty for avoidable contact hurt our chances for a good result, but I must say that it was an excellent job by our team to make the car strong. I was able to put in some good laps and and gather more data for the team. Thank you to all of the competitors and motorsports colleagues who provided me with a warm welcome back into the series. Now it’s on to Mid-Ohio with our Discount Tire, Circle Porsche, Curb Records No. 98! Looking forward to getting right back into driving.” 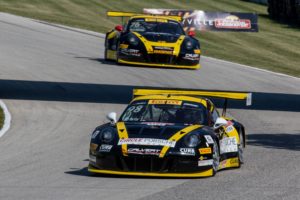 Rounds 12 and 13 of the Pirelli World Challenge are scheduled to air on CBS Sports Network, Sunday, July 3, starting at 3 p.m. EDT.

Michael is scheduled to race the next PWC event for the Calvert Dynamics team, which will be at the Mid-Ohio Sports Car Course, for rounds 14 and 15, July 29-30. 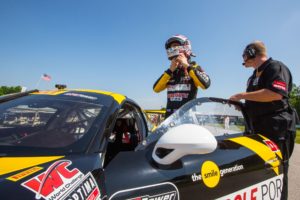