Phoenixville, Pennsylvania — Calvert Dynamics announced today that Pirelli World Challenge GT driver Michael Lewis will race for the Calvert Dynamics team at Road America and Mid-Ohio. Lewis will strap into the same Porsche 911 GT3 R, now with the No. 98, that he has raced this season in Pirelli World Challenge events. He now teams with Andrew Davis and Preston Calvert for the team’s expanded three-car lineup, with support from Phoenix Performance. 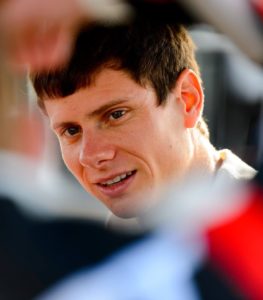 Lewis began the season with EFFORT Racing, taking back-to-back wins on the Streets of St. Petersburg to start a championship charge. With the EFFORT team putting its focus toward 2017, Lewis is being welcomed to Calvert Dynamics, bringing along engineer Stefan Pfeiffer as well as crew members to the expanded Calvert Dynamics program of twin Porsche 911 GT3 Rs in addition to the team’s GT3 Cup Porsche.

“We’re back. Discount Tire, Circle Porsche, Curb Records, and Calvert Dynamics, thank you. For Road America and Mid Ohio, we’re going to have some fun and represent our partners in the most professional way. It’s simple – let’s go racing. A big thank you to my fan base, the racing colleagues who offered a helping hand during my time away from the Pirelli World Challenge, and to my additional core partners including The Smile Generation, Cometic Gasket, Inc., and ASE for their empathy, care and support,” said Lewis.

“Racing is a big family and it’s really nice to be able to work with so many great people who are, well, family. Thank you to Dr. Preston Calvert for this opportunity, and I look forward to teaming up with Andrew Davis to get our Porsches on top. For these two races we will be running the famed No. 98, which has much history with Curb Records and the Agajanian family. Let’s see if we can have the same luck as the No. 98 had in this year’s Indianapolis 500. Congratulations to Curb Records, Bryan Herta, and Alexander Rossi for that historic win. With that being said, in all seriousness as well, I wish a speedy recovery for Jorge De La Torre and my prayers go to Andrew Palmer and to his family,” Lewis continued.

“While we were sad to learn that EFFORT Racing was unable to continue its season in PWC for 2016, we are happy to be able to welcome Michael Lewis to our team for the Elkhart Lake and Mid-Ohio rounds of the season,” said team principal Preston Calvert. “He will bring his excellent racing ability and dedication to our paddock, along with his engineer, Stefan Pfeiffer, and crew members with whom he has been working this year. We are proud to have Michael racing in the Calvert Dynamics livery, and we look forward to successful results from both of our outstanding GT drivers.”

Andrew Davis echoed these sentiments, and stated: “I had the privilege to work with Michael a few times as he was transitioning from open wheel race cars into Porsche GT machines. I was instantly impressed with both his attitude and his ability, so it’s no surprise to me that he has already become a race winner in the Pirelli World Challenge. Having Michael join our Calvert Dynamics program is very exciting. I feel that having a solid teammate will help to strengthen our current effort to optimize performance in our No. 76 Porsche GT3 R. Congruently, it breathes new life into Michael’s previously interrupted season. I’m very much looking forward to our new beginning at Road America, and I want to thank Preston and Meg Calvert for making it all possible.”

“Our ability to add Michael Lewis to our team highlights the careful and precise planning that the Phoenix Performance organization provides to our racing efforts,” Calvert added. “Joe and Andrew Aquilante have worked quickly and effectively to mobilize the resources to accomplish this merging of team assets. We are happy to welcome EFFORT team manager Erin Gahagan to our leadership group, along with master technician Dave Gahagan. Calvert Dynamics is fortunate to have the support of such a capable leadership team.”

With more than 900 stores in 31 states, we have grown to become the world’s largest independent tire and wheel retailer today. The company was founded in 1960 when founder Bruce T. Halle rented a building on Stadium Boulevard in Ann Arbor, MI. Although the inventory consisted of only six tires (four of which were retreads) and the showroom was not quite the showroom we see today, faith, vision and hard work were then, and still remain, the foundation on which this company has grown and prospered. Day by day, tire by tire, this one-man operation slowly grew into what is now one of the most recognized names in the industry.

Circle Porsche of Long Beach is California’s oldest Porsche Dealership, opening in 1969. Our Service Department offers convenient drop-off and pick-up options, as well as loaner cars for major services, services such as detailing, window tinting, and so much more. We built this dealership for you and your Porsche.

Celebrating its 50th anniversary, Curb Records is one of the world’s leading independent music companies. Owned and operated by Mike Curb since 1962, Curb Records has achieved 433 number one records, over 1,500 Top Ten records, and charted over 4,500 total records. Today’s roster includes some of the top names in Country, Christian and Pop/Rock music. Curb Records was honored as Billboard Magazine’s 2001 Country Music Label of the Year and Radio & Records Magazine’s 2005 Overall Gold Label of the Year.

Phoenix Performance is a performance tuner, providing maintenance, tuning and diagnostic services for foreign and domestic cars and trucks, as well as performance upgrades and tuning for street and track cars. The PWC race team occupies part of the 32,000-square-foot race shop, which is located 30 miles west of downtown Philadelphia. Since 1999, Phoenix Performance has prepared over 35 SCCA Runoff winning national championship cars for customers.