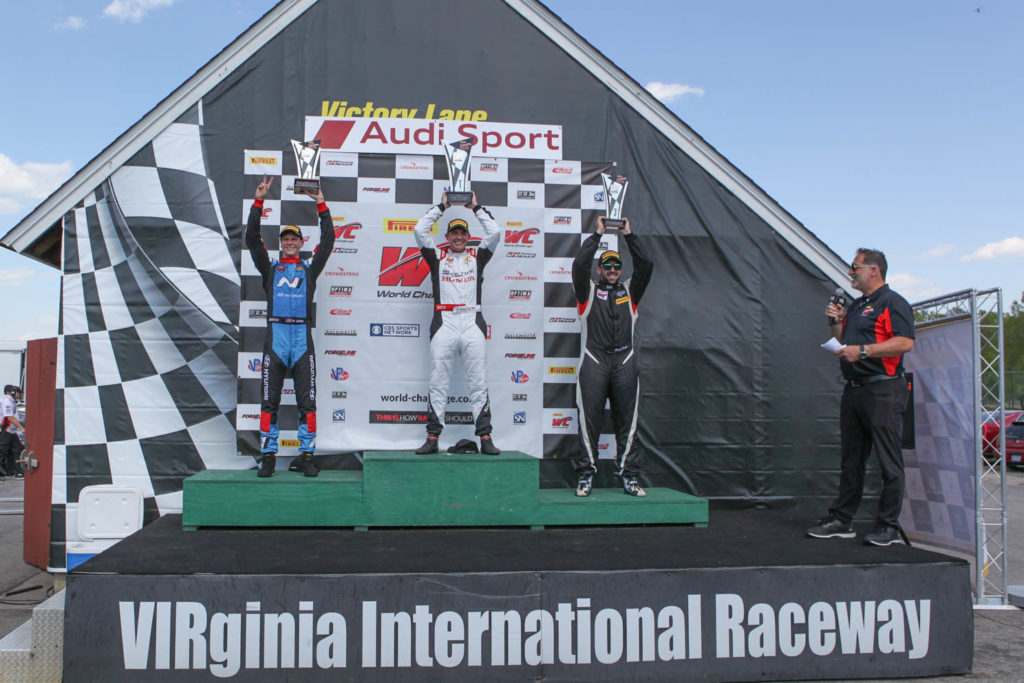 Michael Lewis earned the second position on the podium for Round 3 of the Pirelli World Challenge TCR class at VIRginia International Raceway on Saturday, April 28, 2018. All photos by Andrew Modena.

With 1-2 finishes in each of the two COTA 40-minute TCR sprint events, Michael and Mark came to VIR this weekend with targets on their No. 98 and No. 99 BHA Hyundai i30 TCR machines when Friday’s two practice rounds began. And the two racers knew what to expect. 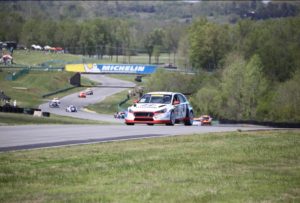 Due to a red-flagged qualifying session, Michael Lewis started Round 3 of the PWC TCR race in last position, but charged through the field during the 40-minute race to claim second.

In Friday’s action, Michael posted the sixth quickest time in the TCR class morning practice session, and Mark with the second fastest time.

“This track is much different than the COTA circuit with a more old-school track layout,” said Michael Lewis, the Round 1 race winner. “There is a lot of runoff at COTA and some here, too. But you need to be more precise with your driving at VIR. You have to respect track limits here because you can find the wall. I’m very confident with the car and, for me as a driver, I need to be very good in the brake zones. We would love to repeat the COTA performances, but it will not be easy. We’ll try for it though.” 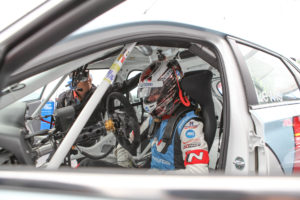 Michael Lewis buckles in to the No. 98 with Data Engineer Justin Jang turning on the onboard cameras.

Qualifying for the BHA Hyundai i30 N team was scheduled for Saturday morning. The 20-minute session got underway, but was red-flagged before Michael could set a proper lap time in the No. 98. The 27-year-old from Laguna Beach, California, was forced to start last in the 14-car TCR field. But he stole the show on Saturday afternoon with a sensational drive through the field to finish second, as well as setting the fastest race lap. That quick lap gave him the pole position for Sunday’s Round 4 TCR event.

Teammate Mark Wilkins, also a COTA race winner like Michael, drove to second for the majority of the 40-minute event in his No. 99 Bryan Herta Autosport with Curb/Agajanian Hyundai i30 N TCR before experiencing a mechanical issue with just four laps remaining. The Canadian driver had to settle for 13th place in the TCR division Saturday. 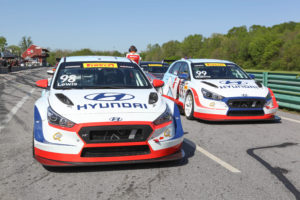 After setting the fastest lap of the race on Saturday, April 28, Michael Lewis placed his No. 98 Bryan Herta Autosport Hyundai i30 N on the pole for Sunday’s race, with teammate Mark Wilkins next to him in second.

Congratulations to Ryan Eversley who won Saturday’s TCR event as he drove a great race,” exclaimed Michael. “Hats off to my teammate Mark Wilkins who drove a tremendous race and challenged Ryan for the lead. We got caught out in the qualifying session, but I knew we would have a good car for the race. I was patient in the race and worked my way through the field. I didn’t want to force anything and make a mistake. It’s awesome to be on the podium (first, second and second) in my first three TCR races. I had to manage the tires today and try to get close to Ryan and Mark. I feel badly for Mark because he was racing for the lead and had a problem.” 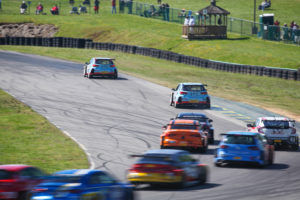 Setting the fastest lap of Sunday’s race on lap 7, Michael Lewis was pulling away until a damaged left-front axle took him out on the following lap, ending his hope of another podium finish at VIR.

Michael and Mark had an excellent experience with the crowd and many Hyundai associates on hand this weekend at VIR.

“There were a lot of Hyundai people here today and they are excited about this TCR program,” Michael said. “To be honest, the crowd was so nice and they are really into our Hyundai cars, and Mark and I were able to meet a lot of people today. This new Hyundai i30 N program has many people interested and excited for our racing program. It’s a great atmosphere. There is a lot of enthusiasm.” 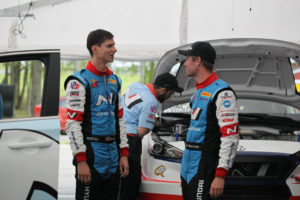 For Sunday’s Race 2, Michael led the field from a standing start and when the red lights turned off, he and his Bryan Herta Autosport teammate pulled away for a clean run into the first turn. Michael quickly took off and set the fastest lap of the race on Lap 7, over a full mile per hour faster than his best Saturday race speed. Unfortunately, as Michael was leading with Mark Wilkins just behind him, Michael’s No. 98 Hyundai i30 N TCR race car sustained a left-front axle failure and had to retire on the following lap. Although Michael’s race was done for the day, he cheered on his teammate who took the victory at the 3.27-mile, 17-turn road course.

“We had a great car today and I was looking to earn my second win of the season,” he said. “But we had a problem in the lead and that is a disappointment for us. I thought we had a car to win with our Hyundai i30 N TCR. But, if I couldn’t win, I am glad that it was Mark. I’m very happy for my BHA Hyundai teammate to win the race today. We will regroup and be ready for racing action around the tight and tricky Lime Rock Park course at the end of May. Thank you to Bryan, Nick, John, Justin, Nate, Zach, Jake, Robbie, Dusty, and everyone involved with our team, and with Hyundai for their hard work and the late nights to give Mark and I fast and safe cars during the weekend. I want to get back driving and be with the team as soon as possible!” 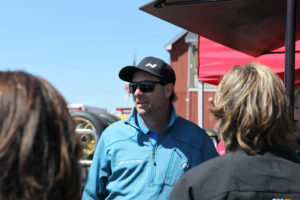