Laguna Beach, CA—Michael Lewis has a new look for the 2009 race season after teaming up with Ryan Young, of Indocil Art and Design, based in Rock Hill, South Carolina, who painted two of Michael’s helmets that feature cutting-edge graphics.

Michael was referred to Ryan and Indocil from Kyle Kietzmann, of Bell Racing, and is extremely pleased with the finished helmets. “Ryan did an awesome job on the helmets,” said Michael. “He’s a great guy to work with, and he’s very talented.”

All of Michael’s racing helmets have included horizontal stripes, which Ryan kept as a theme in these two new designs. 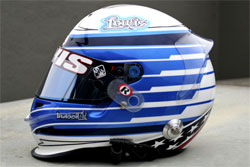 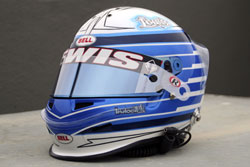 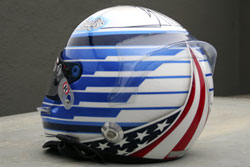 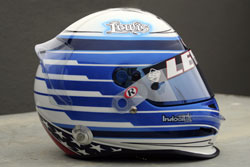 Michael has already caught the attention of many in the racing community by starting off the 2009 season in prime form, earning a second-, fifth-, and sixth-place finish in the USAC California Pavement Ford Focus Car Series, and fourth and eighth in the Formula BMW Americas series. For the remainder of the season, Michael will draw attention for not only his driving ability, but the cutting-edge graphics on his helmet. Look for Michael’s new attractive helmet graphics at one of his upcoming races: in the USAC California Pavement Ford Focus Car Series on Saturday, May 2, at Stockton 99 Speedway in Stockton, California; and the Formula BMW Americas Championship, April 24–26, at Virginia International Raceway.

About Michael Lewis: The 2009 race season marks Michael Lewis participating in the BMW Formula Americas Championship driving for the Eurointernational team, and he is also driving select pavement races for the Western Speed race team in the USAC California Pavement Ford Focus Car Series. Michael is the 2008 IKF TAG Class champion, and also earned two quarter midget championships in the Senior Honda and Light 160 classes. Michael is a senior at Laguna Beach High School, and resides in Laguna Beach, California.

About Indocil Art and Design: Formed in 1997, Indocil Art and Design has become a highly respected helmet specialist providing quality custom work and superior service to the racing community. Besides offering one-off custom paint, Indocil works with an assortment of safety suppliers and radio manufacturers to provide a one-stop location for all helmet needs. Offering products from industry leading brands allows racers to purchase their helmets with custom designed paint, with HANS or Hutchins anchors, and with pre-wired radio equipment.