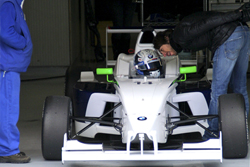 Michael’s last appearance in a Formula BMW race car was at the Okayama International Circuit for Rounds 13 and 14 of the 2009 Formula BMW Pacific series last November, and Michael was anxious to jump back into the race car. He quickly adapted to the Monza track on the first day of testing despite the cold temperatures, which never rose above 39 degrees F. “This is a fast track with long straights and Antonio Ferrari and the Eurointernational crew had my car prepared well so all I had to do was concentrate on hitting my marks and build up to speed,” explained Michael. “I enjoyed the experience of testing on the famous Monza track and look forward to coming back here in September for the race. Unfortunately, the second day of the two-day scheduled test was cancelled because of inclement weather.” 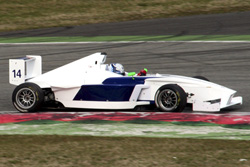 The Formula BMW Europe series manager made the decision early in the day to cancel the second day of Collective Testing because of the snow. With only one day on the track Michael ran second fastest for a good portion of the morning session, fifth fastest on the time charts during the afternoon, and finished the Collective Test sixth fastest overall of 15 drivers.

“Michael adapted to the track very well for being his first time here,” stated Antonio Ferrari, Eurointernational team owner, “and now we head for two days of testing at Barcelona.” The next Formula BMW Europe Collective Team Test will be held at Circuit de Catalunya in Barcelona, Spain, on March 21 and 22. All three Eurointernational teammates will then compete in Rounds 1 and 2 of the Formula BMW Pacific series, April 2–4, 2010, which runs in conjunction with the Formula 1 Petronas Malaysian Grand Prix on the Sepang International Circuit in Kuala Lumpur. 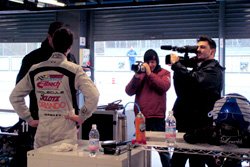 During the test, the media took an interest in Michael, who is the only American driving in the Formula BMW Europe series this season, and he was interviewed for Italian television by Roberto Cinquanta of 4:2:2race.

As Michael and the Eurointernational team finalize sponsorship involvement, the Formula BMW race car will soon be painted and all sponsor logos will be added in time for the first race of the Formula BMW Europe season.