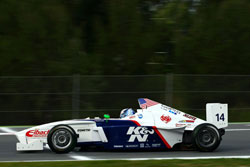 Laguna Beach, California (May 17, 2010) — Young American Michael Lewis had a stellar performance this past weekend at the Sepang International Circuit in Malaysia, by appearing on the podium for all four rounds of the Formula BMW Pacific series event.

Right after crossing the finish line at the Barcelona Formula BMW Europe race last Sunday, Michael boarded a flight to Malaysia to make a guest appearance at the Asian Festival of Speed races at the famed Formula 1 venue for Rounds 3, 4, 5 and 6 of the Formula BMW Pacific series at the Sepang International Circuit. Michael along with his two Eurointernational teammates Carlos Sainz Jr. and Daniil Kvyat immediately went to work upon arrival in Sepang with two full days of practice on Thursday and Friday.

“I did not have time to worry about jet lag and was excited to get back to the Sepang International Circuit where we raced earlier this year,” said Michael, who finished fifth and sixth at Rounds 1 and 2 when the series visited the circuit last month. “I immediately felt comfortable in my car the minute it hit the track for the first practice session on Thursday. My engineer Nicola Sgotto and my mechanic gave me a car that was fast right from the beginning and I was able to record excellent lap times for all the test sessions in preparation for Friday’s qualifying session.” 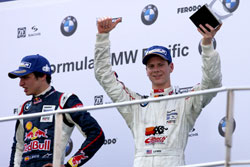 “The key to running up front and winning in the Formula BMW series is to be able to qualify in the top four,” added Antonio Ferrari, Eurointernational team owner. “Our three drivers qualified 1st (Kvyat) 3rd (Lewis) and 4th (Sainz) so I knew from the beginning that our drivers would have an excellent chance to run well in the four rounds at Sepang.”

At the start of Round 3, Michael fell back a bit in the pack from his third starting position, but was able to quickly work his way back to the front into the second position with his teammate Carlos Sainz Jr. in tow. Michael finished 2nd at the conclusion of the 10-lap race, and in the process set the fastest lap of Round 3.

Round 4 took place in the afternoon on Saturday and again had all the Eurointernational drivers at the front of the grid with Michael starting in third. He fell in line with his two teammates at the front and the three drivers pulled away significantly from the field. Michael battled hard to advance into second position in the remaining laps, setting the fastest lap of the race, but remained in third position at the checkered flag.

Rounds 5 and 6 took place on Sunday, which began with Round 5 as Michael started in second position as a result of his second-place finish in Round 3. He made a strong start and was pushing his Eurointernational teammate Daniil away from the many cars behind. With three laps remaining, Michael began putting pressure on his teammate and nearly secured the lead after many attempts. However, Michael finished in second place when he crossed the finish line providing the opportunity to celebrate on the podium again at the Sepang International Circuit.

Round 6 was the final event of the weekend, but Michael wasn’t done showing how strong he and his car were for the race weekend. He started from third position as a result of his finish in Round 4. On the first lap, he immediately passed his teammate Daniil in the third turn to secure second position. From this lap to the end of the race, Michael began chasing down his other teammate Carlos as they both began to pull away from the field. Michael and Carlos battled with equal lap times throughout the remainder of the race. Michael eventually got within four car lengths of the leader and finished the day in second position, giving Team Eurointernational a sweep of the podium.

“Michael was fantastic this weekend,” said Antonio Ferrari. “He qualified well, raced hard and earned his four podium appearances. He even set several fast lap times over the event, which is an excellent accomplishment. All three Eurointernational drivers did very well and now we are headed back to Europe for a Collective Team Test at the Hungaroring on May 25 and 26.”

“Overall, I am extremely excited for the Eurointernational team and for me as we were able to place on the podium in four straight races,” said Michael. “A victory was ever so close, however, three second-place finishes and one third was a great result for the weekend.”

After the Formula BMW Collective Test at the Hungaroring in Budapest, Hungary, Michael and the Eurointernational team will visit Zandvoort in The Netherlands for Rounds 3 & 4 of the Formula BMW Europe Series, June 4–6, 2010.