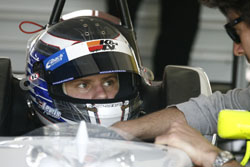 Michael again topped the speed charts with a fastest lap of 1:30.266, but he wasn’t the only driver in position one as Victor Guerin of the Lucidi Motors team also clocked the exact same time. A total of 10 drivers and four teams competed in the preseason collective test.

“It was a very successful test at Vallelunga for me and my PREMA teammates Raffaele Marciello and Andrea Roda,” said Michael. “We worked as a team throughout the day and the car was excellent. I just made a slight mistake on my final lap so I was not able to obtain full potential from the car and would have been in sole possession of P1.” 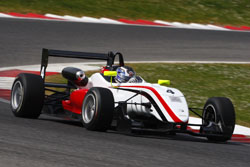 “Very good work in the last tests from Michael Lewis who constantly was at top of the results,” observed Angelo Rosin, PREMA Powerteam team principal. “His approach is very professional and he is working well with the entire team. We have to continue working hard like we are doing and wait for the Franciacorta race debut. We have to remember that Michael is still a rookie so he will have to continue in his learning curve.”

Michael and the PREMA Powerteam will complete more preseason testing with the next collective test scheduled to visit Misano before the first race of the 2011 Formula 3 Italia season on May 15, 2011 at Franciacorta.