Longfield, Kent, England (May 19, 2012) — After finishing 3rd in Saturday morning’s Round 4 of the Formula 3 Euro Series event at Brands Hatch, American Michael Lewis had the confidence and the PREMA Powerteam had the Dallara F-312 with Mercedes power dialed in to be a contender in Saturday afternoon’s Round 5.

“Because of the invert, every car I can overtake makes a huge difference in the points accumulation,” said Michael Lewis. “I knew how important getting a strong start would help me and play a key role in my finishing position. Plus my two teammates who finished in the top-two positions in Round 4 were directly behind me, so it made it even more important to get a strong start to hold them off.” 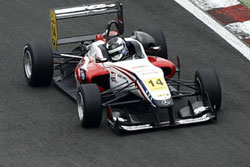 The lights went out to begin the race and Michael made a bold start and immediately moved into 4th place by halfway through the first lap. Toward the latter stages of the race, Felix Rosenqvist was trying to challenge Michael for 4th position, but Michael kept his line, drove a smart race, and held off any attempts to lose the position.

“My PREMA Dallara F-312 with Mercedes power felt very good in the early stages of the race but eventually the lead pack started to move away,” said Michael. “I then kept my focus on maintaining 4th position knowing that each and every point in this competitive series is very important.”

Sunday’s third F3 Euro race of the weekend, which is Round 6, will be 40 minutes, or 56 laps, whichever comes first. The cars will be placed on the grid for Round 6 based on their qualifying order, which Michael will start the race in 4th position. Round 6 is scheduled to start at 10:50 a.m. local time on Sunday morning (2:50 a.m. PDT/5:50 a.m. EDT).