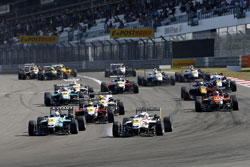 Nürburg, Germany (August 18, 2012) – Friday’s qualifying for the Formula 3 Euro Series’ visit to Nürburgring featured grid positions for Saturday’s Round 13 that were determined by only hundredths of a second, which placed American Michael Lewis in 10th place on the starting.

Race fans arrived to the 3.629-kilometer German track on Saturday morning under a clear blue sky as they watched the 17 Formula 3 Euro Series cars be placed on the grid for the 29-lap, or 40-minute race. After the mandatory warm-up lap, Michael positioned his K&N / Eibach Springs PREMA Powerteam Dallara F312 car with Mercedes power on the inside lane in his #10 designated grid starting position. The F3 Euro cars’ engines hummed in unison on the grid as rev limiters were on and the drivers awaited the starting lights. The drivers anticipated the 11:15 a.m. start time and thoughts were focused on getting the best start when the starting lights went out as they approached the tight right hand turn at the end of the front straight. 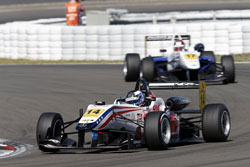 Michael engineered an excellent launch at the start and chose the inside line for the important turn one battle for position. He was able to overtake one car and then gained another position on the next corner. However, Michael went wide on the track and lost the positions he gained, so at the end of the first lap, Michael was scored in 11th position. As the first few laps unfolded it was clear that Michael had the speed to move forward but passing at Nürburgring is challenging in the Formula 3 category. Michael followed closely on the rear wing of driver Tom Blomqvist as Blomqvist kept on the rear wing of William Buller, and this parade continued for a number of laps. Later in the race, Michael spun and went off the track but was able to keep the car running to rejoin the race. He came back to finish 15th as the checkered flag waved for PREMA Powerteam teammate Daniel Juncadella, who won the race.

“I put myself in a tough position for this Nürburgring race as a result of Friday’s qualifying effort, which was not want I wanted to happen,” said Michael Lewis. “I knew going into the race that I would have to pass to move forward and the two cars ahead of me were running about the same pace I was running, so I started pushing to get by Blomqvist and unfortunately flew off the track.” 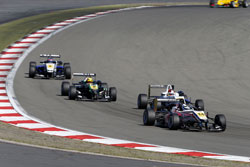 The second race of the weekend, Round 14, was scheduled for 3:25 p.m. The weather remained warm with clear conditions, providing a perfect backdrop for the large contingent of race fans who filled the grandstands and the grass viewing area for the 20-minute, 15-lap sprint race. The starting grid for this race is determined by the finishing order from Saturday’s first race, which place Michael Lewis in 15th on the grid.

“In order to have a decent finish in Race 2 I planned to keep my focus on passing cars quickly and cleanly since the race is only 15 laps, which did not give me much time to work with,” said Michael Lewis.

Michael placed his PREMA Powerteam Dallara F312 with Mercedes power and sponsored by K&N and Eibach Springs in his assigned grid position. The lights went out and 17 Formula 3 Euro Series cars headed for the sharp right hand turn at the end of the front straight. Michael was able to get another strong launch and immediately advanced a position during the turn 1 scramble. At the completion of lap 1, Michael was scored P-14. On lap 2, he passed another car and advanced to P-13, and then driver Carlos Sainz Jr. was given a drive-through penalty for a start infraction, so Michael inherited another position. By lap 7, Michael had worked his way from 15th to 10th. For the next 7 laps, Michael ran down British F3 driver William Buller, and on lap 14 made a classic pass at turn 1 to claim 9th position, where he finished the race just behind his PREMA Powerteam teammate Daniel Juncadella. 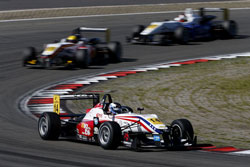 “Everything was working during the race,” exclaimed Michael. “My PREMA engineers made some changes after the first race this morning, which made a big difference. I was pleased with my ability to keep a strong pace from the very start right up to the finish of the race. My Mercedes engine gave me that little bit extra that helped me pass all those cars in a very short period of time.”