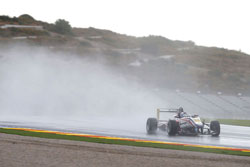 Michael first recorded laps on the Spanish track in the summer of 2008, when he took the Formula BMW licensing course. Now Michael returns to Valencia to compete in the Formula 3 Euro Series’ Rounds 19, 20 and 21 that will take place on Saturday and Sunday as support races to the DTM event.

A storm system arrived late Thursday evening that brought a steady flow of rain to the Valencia area, which continued through most of Friday’s track activities. As a result, the two 50-minute practice sessions were conducted in “wet conditions,” so all 14 race cars were fitted with rain tires. 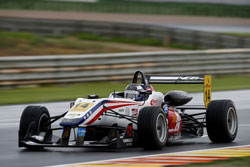 Promptly at 10:50 a.m. Friday morning, the Formula 3 Euro Series drivers set out on the 4.005-km road course, with Michael driving the K&N / Eibach Springs sponsored Dallara F312 of PREMA Powerteam featuring Mercedes power. During the first practice session, Michael moved up and down the time chart, and when the 50-minute period ended, he was scored as 10th fastest.

For the second 50-minute practice session, faster times were recorded earlier in the session because the rain increased as the session went on, preventing drivers from bettering their times. As a result, Michael finished the session with the 12th fastest time.

The all-important qualifying session was scheduled to start at 3:50 p.m. on Friday afternoon. Track conditions improved considerably when the rain stopped. Prior to the F3 Euro qualifying session, the DTM cars hit the track for their lengthy practice session. With 24 cars on the track, combined with no more rain, the track was almost dry.

The PREMA Powerteam engineers decided to have their team’s cars start the qualifying session on wet tires and then come in after just five laps to change over to the racing slicks for the remainder of the 30-minute session. Michael was in the top six on the wet tires, but the track did start to dry out so he and the other competitors drove into their pit boxes to put on the slick tires. 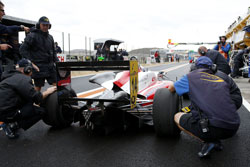 Just as Michael returned to the track, the red flag was shown due to an on-track accident, so all the remaining cars had to return to the pit lane and wait until the accident was cleared. Time was short for the drivers to go out and make their qualifying lap and Michael completed the session to start Race 1 and Race 3 of the weekend in 11th.

“The car felt good but my time was not what I anticipated,” said Michael Lewis. “Now I must work hard to have a decent finish in Race 1.” The top-eight finishers in Saturday’s first race are then inverted for Race 2, so Michael’s goal is to work up to at least 8th in the first race to give him a strong starting position for Saturday’s second race.