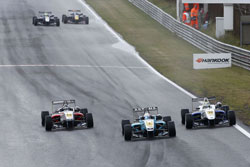 Zandvoort, The Netherlands (August 26, 2012) — After a strong start to his Formula 3 Euro Series race weekend at Circuit Park Zanvoort, in The Netherlands, unfortunately, that momentum didn’t continue and several factors led to Michael Lewis’s early retirement from Sunday’s Round 18.

About an hour prior to the start of the 40-minute / 26-lap Round 18, a heavy rain storm arrived at the track, so the 4.307-km Dutch track was wet when the 14 drivers left their paddocks and headed out onto the track for the warm-up lap. American Michael Lewis positioned his K&N / Eibach Springs PREMA Powerteam F312 Dallara powered by Mercedes in 5th position on the grid, which was determined by the Friday qualifying session. Michael, along with 11 other drivers, would start the race with the wet tires while his PREMA teammate Daniel Juncadella and one other driver were positioned on the grid with the normal slick tires on their race cars. The race director sent out the safety car to lead the first few laps of the race due to standing water on the track. All 14 drivers began the race behind the safety car under the yellow flag. After four laps behind the safety car the green flag waved and the safety car exited the track as the cars came onto the long Zandvoort front straight. At the start/finish line, a crash occurred just ahead of Michael that took out two of the cars, which allowed Michael to gain two positions. As a result, Michael took over 3rd position behind Felix Rosenqvist in 2nd and Daniel Juncadella in 1st. The safety car reappeared on the track due to crash debris, which bunched up the race cars on the track. The PREMA team decided to bring Michael into the pits and put on the slick tires. However, only about half of the field also came into the pits to change tires, so Michael returned to the track in 6th position on lap 6.

The green flag waved once again and half of the field was still on wet tires and the rest on dry tires. Swiss driver Sandro Zeller had worked up from starting the race in 14th position to 2nd place during the pit stop time period but still had rain tires on his car. As the track began to dry, his lap times starting sliding dramatically compared to the cars with the tires for the dryer conditions and a pack of cars behind him on the slick tires started gaining ground on him, which included Michael. Cars started passing Zeller, and in the process of this bunching up, Michael was passed and went to P-7, but was still in the pack behind the Swiss driver. On lap 11 as the pack of cars was exiting the final turn onto the front straight, while attempting to pass Zeller, Michael ended up in between two other cars. Michael ran out of room, which caused him to touch wheels with Tom Blomqvist. Unfortunately, Michael’s car headed toward the inside wall and a hard crash occurred, which ended Michael’s race early. 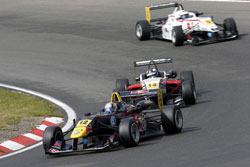 “After the incident that occurred yesterday in Race 2, the last thing I wanted to do was to end up in a crash here in Race 3,” said Michael Lewis. “We were all trying to get by the slower car and I got myself in a bad situation being in the middle of a three-car sandwich that resulted in the crash developing. PREMA gave me another great car today. I believed that as the race progressed, I could continue to take advantage of the slick tires and the drying track conditions, but unfortunately the crash ended my day.”

The Formula 3 Euro Series now has a full month off before the final two race events for the 2012 season will take place at Valencia, Spain, on September 28–30, and the season finale at Hockenheim, Germany, on October 19–21. Michael has a test scheduled in mid- September as he strives to finish the 2012 race season strong.