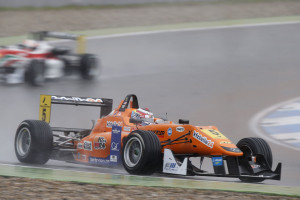 Hockenheim, Germany (October 22, 2013) — American Michael Lewis closed out the 2013 FIA Formula 3 European Championship at the Hockenheimring on Sunday, October 20, with his 8th top-10 finish of the season.

The 10th and final round of the 2013 FIA Formula 3 European Championship visited Hockenheim, Germany, October 18–20. Races 28, 29 and 30 were scheduled at the 4.574-km Hockenheimring on the same event weekend schedule as the season-ending DTM event.

On Friday, October 18, the kfzteile24 Mücke Motorsport team prepared Michael’s orange No. 5 Dallara 312 with power from Mercedes-Benz and sponsored by K&N Engineering and Eibach Springs for the two practice sessions.

Promptly at 11:45 a.m., the 28 Formula 3 drivers took to the famous German circuit for the first of two 40-minute practice sessions. Most of the cars began the first session with new tires, and Michael was consistently in the top 10 during the beginning of the session. Although Michael ended the first session P16, he was pleased with the car’s handling capabilities. For the second 40-minute session Michael went on the track with used tires on his race car as did many other drivers who were on the same tire strategy. Michael’s times were in the top 12. Just past halfway through the second session, Michael came onto pit road for a new set of Hankook Tires. However, once he reentered the track several factors out of Michael’s control hindered his ability to lay down a fast lap, including the spacing of the cars on the track and a yellow flag for a car that went off the track in one of the turns. Michael finished the practice session in 19th. 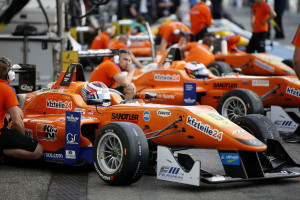 Two 20-minute qualifying sessions occurred on Friday to set the starting grid for the weekend’s three races. Two sets of new tires were available to Michael, with one set for each session. The plan was to make a fast lap early in each session in case of yellow or red flag situations that could hamper or shorten the qualifying periods. Traffic played an important component from preventing Michael from making a fast lap in the first qualifying session, so his fastest lap of the session of 1:34.753 placed him in 20th for Saturday’s Race 1. His second fastest lap of 1:34.868 placed him in 19th on the starting grid for Saturday afternoon’s Race 2.

For the second 20-minute qualifying session Michael was finally able to find some better spacing on the track and improved his qualifying effort considerably with a lap of 1:34.310, which placed him P16 on the grid for Sunday’s Race 3.

Saturday morning, the 28 FIA Formula 3 European Championship drivers prepared for the 22-lap or 35-minute Race 1 at the Hockenheimring. American Michael Lewis positioned his K&N Engineering and Eibach Springs sponsored kfzteile24 Mücke Motorsport powered by Mercedes-Benz entry onto the grid in anticipation of another frantic start with the opportunity to quickly grab positions. Then the drivers were given the signal to start their engines and quickly each driver began the intricate start procedure with all the engines on the rev-limiters and clutches held firm until the starting grid lights went out. As he has done all season Michael began to pass cars on lap one. Then a competitor made an aggressive move, which required Michael to avoid making contact, costing him the positions he had gained. At the end of the first lap Michael was scored P20. Michael was able to overtake two cars during lap two and was scored P18. Then on lap three Michael passed another driver and was scored P17. On lap 6 Michael grabbed another position to move up to P16. Michael wasn’t settling for 16th, so on lap 10 Michael passed another car for 15th behind his kfzteile24 Mücke Motorsport teammate Mitch Gilbert. The two drivers ran nose to tail for the remainder of the race and Michael finished P15.

“My car was really strong in the early stages of the race especially in Sector 1,” described Michael Lewis. “When I arrived to where Mitch was running the tire degradation process had begun so my advantage was somewhat nulified and I did not want to push the issue with Mitch because he is a teammate.” 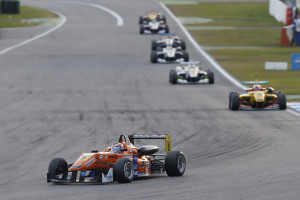 The weekend’s Race 2, or Race 29 of the FIA Formula 3 European Championship took place late Saturday afternoon consisting of 22 laps. Starting 19th on the grid, Michael was eager to quickly make up positions at the start of the race. However, this time when the starting grid lights went out, Michael did not get his usual strong launch and immediately got bunched up with other drivers and actually lost a couple of positions. As the race progressed Michael was caught in a pack of cars and was unable to move forward, finishing in 20th.

Determined to finish the last race of the season well, Michael arrived to the Hockenheimring on Sunday morning optimistic. Although the weather could prove a challenge with scattered showers expected, he would not let that impede his focus. However, the weather report was not fully accurate as instead of showers, a torrential rainstorm left standing water on the track. The race director decided to start the race under the yellow flag with the Safety Car leading the pack of 28 drivers for a few laps to spread the water around the track. Michael earned a 16th starting position for Race 3 as a result of his Friday qualifying results. After two laps running behind the Safety Car the race director signaled for the green flag start. Then in a foggy mist the drivers headed down the front straight into the fast right-hand turn. Not deterred by the wet track, Michael began overtaking cars while other drivers were having misfortune with spins and trips to the gravel traps. Approaching the halfway point of the race, Michael had worked his way up toward the lead pack of cars and was running 10th. He overtook two more drivers, and with three laps to go was listed in 8th. While traveling in 5th gear toward the hairpin, suddenly without warning Michael’s car made a complete 360-degree turn and stopped with the nose of the car pointed at the corner entry. Michael only lost two positions as a result of the spin and still finished the race P10. 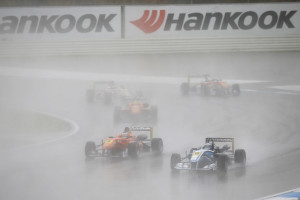 “Now that the 2013 Formula 3 season is complete, I want to thank the great group I worked with at kfzteile24 Mücke Motorsport,” said Michael. “I want to express my sincere appreciation to all my devoted sponsors who were such a huge help to me this season. I also want to thank the FIA Formula 3 European Championship Series, which gives young drivers like me the ability to race safe, fast cars at some of the most famous racing venues in the world. I will now concentrate on my 2014 program, and I am looking forward to taking the next step on the racing ladder.”