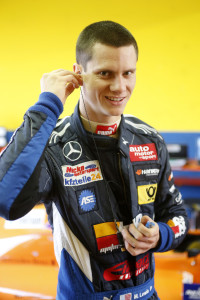 Vallelunga, Italy (October 15, 2013) — Although the Vallelunga circuit, which is located northeast of Rome in Italy, presented several challenges to American Michael Lewis this past weekend, he managed to fight valiantly over the three races of the ninth round of the 2013 FIA F3 European Championship, and earned a 10th-place finish in the weekend’s third race.

Although this weekend marked the first time the FIA Formula 3 European Championship visited the 4.085-kilometer Vallelunga Piero Taruffi Racing Circuit, Michael Lewis is a veteran of the Italian track, where he competed in the 2011 Formula 3 Italia series.

Due to scheduling conflicts with the race track, the ninth round of the 2013 FIA Formula 3 European Championship had a more condensed schedule than normal, with practice, qualifying and the weekend’s first race taking place on Saturday, October 12. Races 2 and 3 of the weekend were scheduled for Sunday, October 13. 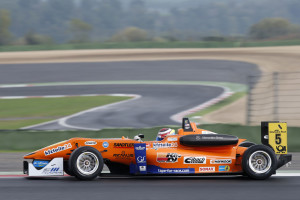 Saturday began with 27 Formula 3 drivers taking the track in the morning for two 40-minute free practice sessions. However, rain dampened the track, so the cars were fitted with wet tires. During the session, the rain stopped with the sun appearing, and about two-thirds of the field drove into pit lane to replace their wet tires with racing slicks. Driving the K&N Engineering and Eibach Springs-sponsored orange kfzteile24 Mücke Motorsport Dallara F312 with Mercedes power, Michael hovered in the top 10 when everyone had wet tires on. As the track dried and drivers changed to slick tires, Michael’s times did not improve to the degree of the other drivers, and he finished P-16 at the close of the first 40-minute free practice session.

After a 10-minute break, the drivers returned to the race track for another 40-minute session. This time all the cars were on racing slicks even though the track still was wet. Toward the end of the session, Michael was given a new set of tires to bump up his practice times. With just two laps into his run, the red flag came out because a disabled car could not be removed from the track. Michael was unable to record a faster lap time with the new tires and he finished the second free practice session in 18th. 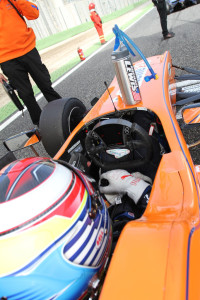 After a three-hour break, the 27 drivers brought their cars to the pit lane to begin two 20-minute qualifying sessions. Just as the cars were brought to pit lane light showers began so qualifying took place under wet-dry conditions. Early in the first qualifying session a red flag condition occurred, which substantially reduced the time left for all the drivers to qualify. Because the drivers were battling for the best position under a shortened qualifying session, Michael had difficulty finding clear space on the track. On the last lap, he turned his best lap of 130.356, which placed him P-20 for Saturday’s Race 1. His second fastest time of 130.913, placed Michael in the 24th starting position for Sunday morning’s Race 2.

After a 10-minute break, the drivers participated in the second 20-minute qualifying session on a completely dry track. Michael improved his qualifying effort with a time of 1:30.000, and would start the third race of weekend on Sunday in 17th position.

After a day filled with rain showers, the weather cleared in time for the 4:45 p.m. start of Race 1. The kfzteile24 Mücke Motorsport team brought Michael’s K&N Engineering and Eibach Springs F3 car to his assigned grid position of 20th. As Michael anticipated the start of the race, the red lights went out and he made a strong launch. He immediately avoided contact with the car directly in front of him that had stalled on the grid. Even with this evasive maneuver Michael picked up a couple of positions and then passed another car. After the first lap, he had already worked his way up to 15th position. From that point on, Michael was at the tail of a four-car train featuring positions 12 to 15 that battled the entire race. However, when the checkered flag waved, Michael finished Race 1 in 15th position. 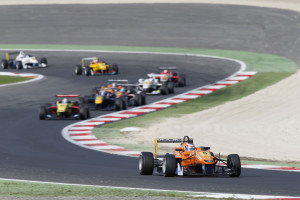 After the previous day of inclement weather, picturesque southern Italian weather arrived for Sunday’s final two races at Vallelunga for the FIA Formula 3 European Championship. Michael Lewis anticipated the extra effort ahead of him for the day’s races as he wanted to move up through the field from his starting positions.

“My kfzteile24 Mücke Motorsport team and engineer Peter Flückiger had been working all weekend on my car setup,” said Michael. “We worked out a plan for Sunday’s races and I was excited about the opportunity to see what would happen and how we could finish the race well with this particular program.”

As the race cars lined the starting grid Sunday morning before a front straight grandstand filled with spectators, Michael placed his kfzteile24 Mücke Motorsport K&N and Eibach Springs-sponsored Dallara F312 powered by Mercedes in 20th. A veteran at gaining spots at the start of races, Michael focused his attention on the perfect launch to make up as many positions as possible for a better finish. All the drivers kept their cars on their rev-limiters while waiting for the starting grid lights to go out. At the race start, Michael lurched forward and managed to avoid a stalled car in front of him. He weaved his way toward the fast Turn 1 right-hand corner passing cars in the process. Half-way through lap one, Michael had climbed up to P-14 and was approaching the infield left-hand hairpin. He chose the outside line as cars were bunched up entering the hairpin and then suddenly a driver swerved to the right and bumped Michael off the track and into the grass. Michael recovered but re-entered the track after the entire field passed by. Fortunately, the safety car came onto the track due to another incident. This gathered together the field and allowed Michael to catch the tail end prior to the re-start. Michael was determined to gain positions, and passed a number of cars to finish the 24-lap race in 15th.

After Michael’s strong performance in Race 2 coming from dead last after the incident at the hairpin, he and his team were optimistic for even better results in Race 3. Michael’s car was lined up in 17th place on the grid. Michael managed another perfect launch and headed toward Turn 1 passing two cars immediately. For the full 24 laps Michael concentrated on getting by car after car while turning competitive lap times. When the checkered flag waved Michael brought his kfzteile24 Mücke Motorsport car sponsored by K&N and Eibach across the finish line P-10.

“The changes we made worked,” said Michael. “I had a car that was fast even as the tires lost grip, so I could keep pace with the lead cars. It was fun out there today with plenty of action on every lap as I moved toward the front.”

The final round for the 2013 FIA Formula 3 European Championship season will take place this coming weekend at Hockenheim, Germany, with the last three races.

“I am looking forward to coming to Hockenheim as it is a demanding track, but I plan to push hard for strong results to conclude the season on a high note,” stated Michael Lewis.