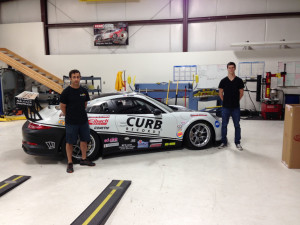 With the merger of the American Le Mans Series and Grand-Am Road Racing into the TUDOR United SportsCar Championship this year, Michael’s return to the United States racing scene is timely, as he sees plenty of opportunity to improve his racing skills in this IMSA-sanctioned race series. The IMSA Porsche GT3 Cup Challenge is the “opening act” for the TUDOR United SportsCar Championship with two 45-minute sprint races per weekend.

“This opportunity to race in the Porsche GT3 Cup Challenge USA by Yokohama with Competition Motorsports/Curb-Agajanian is the perfect fit,” explained Michael Lewis.

Of special significance, Michael and Competition Motorsports have formed a relationship with Curb Records and the Agajanian family for this 2014 season. The official entry for Michael’s No. 98 Porsche GT3 Cup Car will be listed as “Competition Motorsports/Curb-Agajanian.” The famed Curb Records logo will be prominently displayed on Michael’s No. 98 Porsche 911 GT3 Cup Car as well. 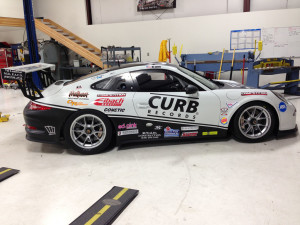 Sebring International Raceway will host the first race of the IMSA Porsche GT3 Cup Challenge USA by Yokohama season in conjunction with the TUDOR United SportsCar Championship’s 12 Hours of Sebring. Michael and the Competition Motorsports/Curb-Agajanian team will arrive at the Florida track for the first of two practice days, beginning on Tuesday, March 10. The following day will be a “Promoter Test Day.” Qualifying and the first 45-minute race of the season will take place on Thursday, March 13, with the series’ second race scheduled for Friday morning, March 14.

In addition to racing in Florida, Michael is looking forward to visiting the other tracks on the schedule, including Mazda Raceway at Laguna Seca, in California. “It might sound funny, but I’ve never gone road racing in my home state of California, and now I get to do that,” added Michael.

Last season Michael competed in the FIA Formula 3 European Championship with kfzteile24 Mücke Motorsport, and the previous two seasons he raced in the Formula 3 Euroseries and in Formula 3 Italia, respectively, with Italy’s PREMA Powerteam.

With Michael’s return to American racing, a number of his core sponsors, who have helped him both in the United States and in Europe, have returned, showing their commitment to share in his success. “I really appreciate my core sponsors staying with me and supporting me these past several years in my racing endeavors, and I look forward to representing their brands and promoting their companies and products. I am also honored to welcome my new partners.”