Laguna Beach, California — Michael Lewis made a successful foray into the Pirelli World Challenge after dominating the GTA class this weekend in the No. 41 EFFORT Racing/Curb-Agajanian Porsche 911 GT3 R at the Circuit of The Americas in Austin, Texas. 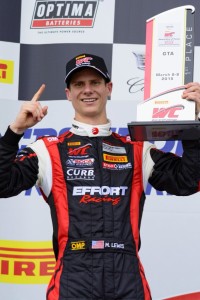 Michael Lewis earned two victories at Circuit of The Americas in the GTA class of the Pirelli World Challenge on March 7 and 8, 2015.

Michael joined 47 other drivers for practice on Friday, March 6, and ended the session 6th fastest overall, and the 2nd fastest competitor in the GTA category.

Saturday morning’s qualifying session would place Michael in 13th for Saturday afternoon’s Race 1, and 12th on the starting grid for Sunday’s Race 2.

Michael and the EFFORT Racing team set their Porsche 911 GT3 R in the 13th starting position, Saturday afternoon for the 2:50 p.m. CT race start. After the lights went out for the standing start, Michael quickly moved up and by the end of the 2nd lap, he had already worked his way into 9th place. At the race’s halfway point, Michael claimed 6th position. When the checkered flag flew to mark the end of the 50-minute race, Michael crossed the start/finish line 1st in the GTA class, and 5th overall of a field that also included competitors in the GT, GTA, and GT Cup classes. 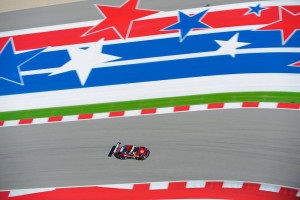 “I want to give a big thank you to the EFFORT Racing team and Porsche Motorsport North America; without their support and their awesome car, this wouldn’t have been possible,” exclaimed Michael Lewis. “The car was really dialed in the whole race, and the tire management was key. I just had to run my lines and pick off people when I felt it was okay to do so. There was great communication between my engineer Stefan Pfeiffer, myself, and my crew chief Ricki Martino during the race as well. This communication on the radio definitely helped get our first win of the season in our debut.” 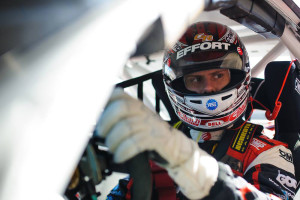 Michael Lewis listens to some last-minute instruction from the EFFORT Racing team before qualifying for the first event of the 2015 Pirelli World Challenge season.

With a major rainstorm predicted on Sunday, the start time for Race 2 was moved up more than 20 minutes to try to get in as much of the race before heavy rain fell. Michael and the other drivers drove their cars from their pit boxes and onto the race track for a double-file rolling start instead of the traditional standing start due to the already wet conditions.

As the rain became stronger during the opening laps, Michael wasn’t deterred by the rainy conditions. He started Race 2 in 12th position and drove carefully around the 3.4-mile road course for the first few laps. A full-course caution soon appeared and after the restart, Michael methodically passed other cars during the adverse conditions, and was able to finish the 18-lap race in 9th position overall, but again, winning the GTA class to claim a weekend sweep of first-place finishes. 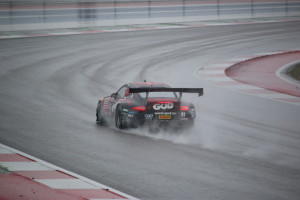 Undaunted by adverse weather conditions for Race 2 of the Pirelli World Challenge, Michael Lewis methodically passed cars from his 12th starting position on Sunday, March 8, to finish the race in 9th overall, but claimed the top podium position in the GTA class.

“The first few laps of the race were a matter of survival, and I worked hard to keep the No. 41 Porsche GT3 R in a good position. My team told me to be patient, keep my eyes open, and figure out in my head where I would go if something happened in front of me. The experience I had driving in the Porsche GT3 Cup Challenge here last year in wet conditions definitely helped confirm some racing lines. It was also a really hard fight with some of the GTA guys for the first half of the race, but we eventually got into the class lead with a move at the end of the back straight. It was really fun to race with the pro guys as well, and congratulations to my teammate, Ryan Dalziel, for his great run at the front in the GT class.” 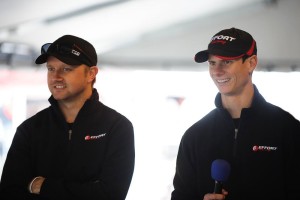 These races will be televised on CBS Sports Network, Saturday, March 14, beginning at 11 a.m. EDT.

Michael and EFFORT Racing will next visit the Firestone Grand Prix of St. Petersburg, in Florida, March 27–29, for Rounds 3 and 4 of the Pirelli World Challenge.