Laguna Beach, California — After winning the first two races in the GTA class of the Pirelli World Challenge (PWC) 2015 season, Michael Lewis continued his winning streak into St. Petersburg, Florida, this past weekend at the Grand Prix of St. Petersburg. Michael won the GTA division of the PWC during Saturday’s first race of the weekend, and finished second in Sunday’s race. The podium finishes extended Michael’s championship points lead by 45 points over the second-place driver. 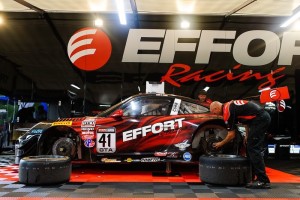 The EFFORT Racing team prepares the No. 41 EFFORT Racing/Curb-Agajanian Porsche 911 GT3 R for driver Michael Lewis before he qualified for the Grand Prix of St. Petersburg on Friday, March 27.

Qualifying
Qualifying for the PWC took place on Friday, March 27, in the rain. After the 30-minute qualifying session, Michael would start 3rd in Saturday morning’s GTA class, and 15th overall in a field of 43 cars.

Race 1
Saturday morning’s Race 1 featured much improved weather conditions as all 43 drivers took the green flag at the 11:10 a.m. EDT start time under sunny skies. Michael set the No. 41 EFFORT Racing/Curb-Agajanian Porsche 911 GT3 R on the grid in 15th overall, but when the green flag waved, he immediately drove outside of the car in front of him and jumped to 13th position seeking to move up during the 50-minute race. However, toward the back of the starting grid, one car tried to avoid hitting a stalled car and caused a five-car wreck and a full-course caution. Due to the number of cars involved, as well as the widespread debris on the track, the caution period was lengthy, and the race did not restart again until 25 minutes were left in the race. Michael quickly moved up again after the race went green, and took first in the GTA class and was running P10 overall. 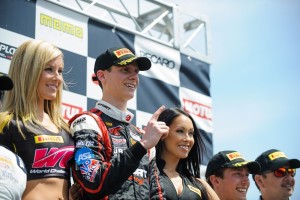 Michael Lewis stands on top of the podium for the third consecutive race after earning his third victory in the GTA class of the Pirelli World Challenge, this time at the Grand Prix of St. Petersburg on Saturday, March 28.

On lap 20, another full-course caution came out when a car spun and crashed into the wall. Because there were only a handful of minutes remaining, the timed race ended under caution. Michael retained the GTA class lead in the EFFORT Racing Porsche, and finished 12th overall.

“It is great to get the victory in GTA on this intense street course,” explained Michael Lewis. “We had a good start off the line, and the race was mainly the first two corners. Passing was pretty risky, so it was about keeping clean to pick up the GTA win. Thank you to my crew chief Ricki Martino and my engineer Stefan Pfeiffer for the great communication during the race; they constantly informed me of our position in GTA. Our EFFORT Racing Porsche 911 was handling well, and we’re looking forward to scoring more points in Race 2!” 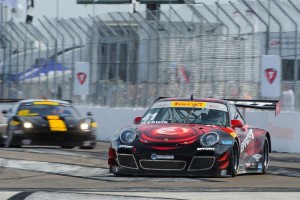 Michael Lewis leads the GTA field of the Pirelli World Challenge in Race 1 of the Grand Prix of St. Petersburg. He finished 12th overall in a field of 43 cars.

Sunday morning’s Race 2 was scheduled to begin at 10:25 a.m. EDT. The starting order for Race 2 is determined by the drivers’ fastest lap of Saturday’s Race 1. Michael would start Sunday’s race third in the GTA class, and 17th overall of 38 drivers.

Michael was methodically working his way to the front after the start of the race, and had moved into second in GTA and 14th overall when several cars crashed into each other in Turn 2 on the second lap. The crash blocked the track and caused a lengthy full-course caution. Due to the limited time allowed for green-flag racing, Michael was able to work his way into second in the GTA, and finished 13th overall. 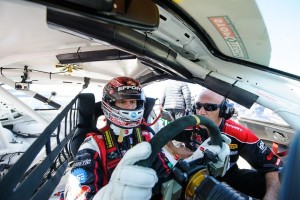 Michael Lewis and an EFFORT Racing crew member strategize before Michael heads out onto the temporary race circuit in St. Petersburg, Florida, on Sunday, March 29.

“The car was solid all weekend,” said Michael. “On Saturday, it was a matter of survival early in the race as a lot of cars were going off the track. During both days, keeping the tires warm during the long yellows was important, but I received good coaching from the crew, and a first and a second puts us in a solid points position. Congratulations to my teammate Ryan Dalziel for his strong run in both races this weekend as well.”

The Grand Prix of St. Petersburg will air on CBS Sports Network on Sunday, April 5, at 5 p.m. EDT. 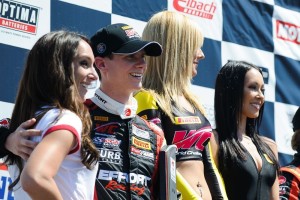 Michael’s fans have access to discount tickets to the event to enjoy the streets of Long Beach and cheer him on. Tickets can be oredered by calling the Toyota Grand Prix of Long Beach ticket office at (888) 827-7333, and mention the special promo code of LEWIS41 when speaking with the ticketing agent. Or, visit www.GPLB.com and follow these directions:

1. Click on “Buy Tickets Here.”
2. Refer to the ticket discount flyers that will inform you of the available MJL special discounted ticket packages.
3. Once you have selected the offered promotional ticket package that fits your needs, then proceed to select reserved seating using the seat map as a guide.
4. After you have selected your seats you can add the tickets (seats) to the Cart.
5. Select delivery method.
6. Select ticket type (Adult, Junior).
7. Proceed to “check out.”
8. The final step at checkout is to enter the special MJL promo code: LEWIS41 and the discount ticket pricing will be authorized.