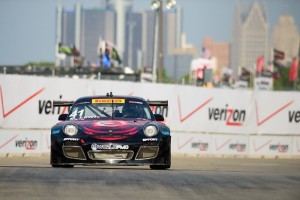 Downtown Detroit, Michigan, provided the backdrop for Michael Lewis’ No. 41 EFFORT Racing/Curb-Agajanian Porsche 911 GT3 R during the Detroit Grand Prix on Saturday, May 30.

Laguna Beach, California — Michael Lewis has earned another top-7 finish, this time in Round 10 of the Pirelli World Challenge (PWC) series’ portion of the Detroit Grand Prix on Saturday, May 30th.

Michael and the EFFORT Racing team began the race weekend by participating in two practice sessions on Friday, May 29th, on the temporary street circuit located on Detroit’s Belle Isle. Although rain was predicted, both practice sessions were able to take place in dry conditions. During Free Practice 1, Michael received some damage to his front radiator after bumping another competitor in Turn 1. This ended Michael’s Free Practice 1 session early, after only completing a handful of laps. Michael brought the No. 41 Porsche 911 GT3 R behind the pitwall for the EFFORT Racing team to repair the radiator and front bumper. The team quickly fixed Michael’s car in time for Free Practice 2 a few hours later, however, this second practice session was red flagged due to an accident by another competitor early in the session. 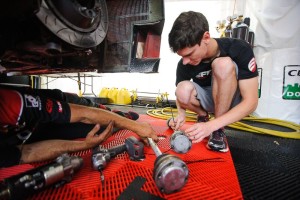 Michael Lewis stays busy both on and off the track during race weekends. Here, he helps an EFFORT Racing team member who is working on the No. 41 EFFORT Racing/Curb-Agajanian Porsche 911 GT3 R.

The EFFORT Racing team finalized setup on Michael’s No. 41 EFFORT Racing/Curb-Agajanian Porsche 911 GT3 R for an early morning qualifying session on Saturday morning. Just as soon as the qualifying session began, it was quickly red flagged because of an incident in Turn 2. The track could not be cleaned in time, so PWC officials decided to cancel qualifying and have the field for Round 10 determined by where the drivers sat in series points after Round 9 (the second race at Canadian Tire Motorsport Park). Michael was in 7th place in the points standings after that event. However, he would start Detroit’s Round 10 in 6th place because his EFFORT Racing teammate, Ryan Dalziel, who was 2nd in the championship points, was competing in Le Mans at the time.

Once Race 1 was set to get underway only an hour after qualifying, Michael had very little track time on the Detroit street course after all of the chaos between Free Practice 1, Free Practice 2, and the latter qualifying session. With the limited track experience, Michael was focused on driving a clean race and learning the track. When the field went green to start Round 10 on Saturday morning, the cars bunched together and Michael fell back to 10th within the first few laps. The race was run entirely under green flag conditions, which helped Michael understand the racing line and gain confidence in the track as well as his car. With 9 minutes remaining of the 50-minute timed race, Michael began passing slower traffic and moved up to 8th place. By this time, many drivers ahead of Michael had retired due to accidents or mechanical problems. With only a handful of minutes remaining in the race, Michael then passed Henrique Cisneros for the 7th position, and would ultimately finish the race there. Michael set the 7th fastest lap of the race. 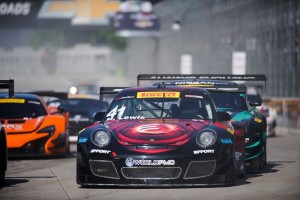 Although Michael Lewis didn’t get much track time on the temporary street circuit on Detroit’s Belle Isle prior to Round 10 of the Pirelli World Challenge, he still managed to start the race in 6th position and finished the race with a solid 7th.

“Race 1 today was a good result considering all of the chaos that happened in practice and qualifying,” explained Michael Lewis. “The start of the race went pretty conservative for me, and I just focused on finding some clean track space to really get into a rhythm, because I didn’t run much over the two days prior to this race. During the race, the team told me that my pace was quite good and that is when we started to catch the guys in front of us. To be honest, our Porsche 911 GT3 R was really good in the slow speed corners and also with conserving the tires; we had a good race pace and I am bummed that I couldn’t have made a charge toward the front earlier on in the race. All in all, we brought the car back clean, and I really appreciate my EFFORT Racing guys who fixed the car in a short amount of time to get me on the track safely after my mistake in Free Practice 1. They made the car fast, and it was then just on my shoulders to get it up front. I hope that I can bring my team an improved result in Race 2 tomorrow.” 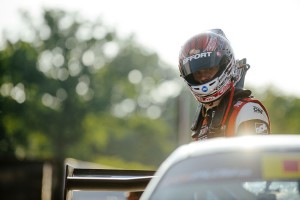 On Saturday afternoon, a rainstorm passed through Detroit, which caused an early finish to the Verizon IndyCar race. Unfortunately, the storm remained over Detroit for Sunday morning’s PWC warm-up session. PWC series’ officials met with drivers after the warm-up session and cancelled Sunday’s Round 11 due to inclement weather and reduced track visibility. Considering the safety of the drivers, teams and course workers, the race was rescheduled.

Round 11 of the Pirelli World Challenge will take place on Friday, June 26, as part of the DeVilBiss Elkhart Lake Grand Prix, which also features Rounds 12 and 13 at Road America in Elkhart Lake, Wisconsin, on June 26-28.