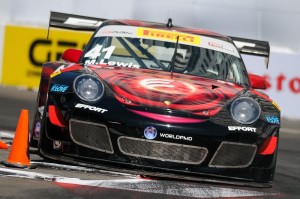 Laguna Beach, California — Earning a victory during last year’s visit to Road America, Michael Lewis is anxious to produce more positive results. This time he will compete in the No. 41 EFFORT Racing/Curb-Agajanian Porsche 911 GT3 R this weekend when he returns to the 4.048-mile road course.

The 14-turn track in Elkhart Lake, Wisconsin, will play host to Rounds 11, 12 and 13 of the GT, GTA and GT Cup classes of the Pirelli World Challenge, June 25–28, for the DeVilbiss Grand Prix at Road America presented by Cadillac. While Rounds 12 and 13 were already scheduled to take place at Road America, Round 11 was rescheduled from the series’ last event in Detroit, Michigan, due to inclement weather, and will kick off the weekend’s three races on Friday afternoon. 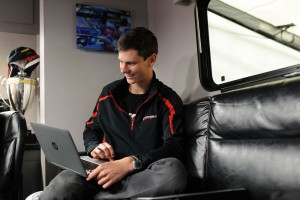 Even while off the track during race weekends, Michael Lewis stays busy with a variety of tasks, including examining data from the No. 41 EFFORT Racing Porsche 911 GT3 R. Photo by Camden Thrasher.

“EFFORT Racing had a great run at this track last year, so it will be a matter of listening to the team and their knowledge of the circuit to earn some good results this weekend,” said Michael Lewis. “The team has worked really hard since the last race to prepare the cars, and it would be special to bring the crew a strong finish here. We have three races on an amazing circuit, and we’re looking forward to a weekend full of racing and competition in our Porsche 911!” 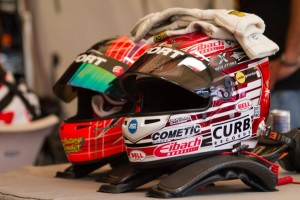 Michael Lewis has experienced success at Road America. Last year he won a race and earned three podium appearances at the 4.048-mile road course in Wisconsin. Photo by Josh Chin.

Michael and the EFFORT Racing team begin their race weekend earlier than normal with GT class testing on Thursday, June 25, followed by the official practice session on Thursday afternoon. Qualifying will take place on Friday morning, which will be important because it will set the starting grid for not only Round 12 of the race weekend, but the rescheduled Round 11 from Detroit’s Belle Isle event.

Following is the event schedule for the DeVilbiss Grand Prix at Road America presented by Cadillac. Timing and scoring will be live during practice and qualifying, which can be viewed live at www.world-challenge.com. All three races will be broadcast via the Internet at www.world-challengetv.com or www.torquetv.com. The races will also be broadcast on television on CBS Sports Network on Sunday, July 5, at 2 p.m. EDT. 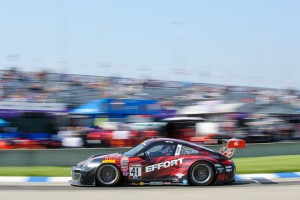 Rounds 12 and 13 of the Pirelli World Challenge will take place on Saturday and Sunday, June 27 and 28, as well as the rescheduled Round 11 from Detroit’s Belle Isle street circuit will occur on Friday, June 26. Photo by Camden Thrasher.