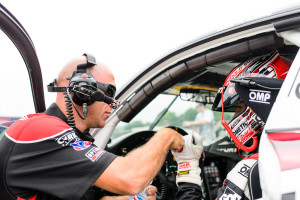 The DeVilbiss Grand Prix at Road America presented by Cadillac started on Thursday, June 25, with practice. Michael was quick from the start as he set a fast lap of 2:06.421, which was tied for the fastest lap of the 45-minute practice session. Friday’s qualifying run would then place him 9th for that afternoon’s Round 11, which was originally scheduled for the previous PWC event in Detroit, Michigan, but rescheduled due to bad weather. 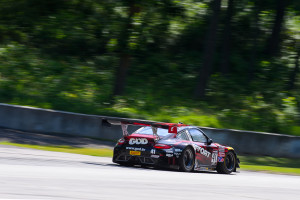 Michael Lewis set the fastest lap time in practice on Thursday, June 25, and went on to qualify for Race #1 and #2 of the Pirelli World Challenge race weekend in 9th of 38 cars.

Michael took to the track Friday afternoon for the weekend’s first GT/GTA and GT Cup race, and while he was on the formation lap to start the race in 9th position, Michael’s Porsche 911 GT3 R encountered a mechanical problem. He had to pull the car off the circuit, and was unable to continue.

Michael and the EFFORT Racing team regrouped for the event’s second GT/GTA and GT Cup race, which took place on Saturday. He lined up on the starting grid in 9th place as a result of Friday’s qualifying session. 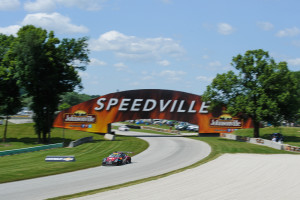 Road America in Elkhart Lake, Wisconsin, played host to Rounds 11, 12 and 13 of the Pirelli World Challenge.

Just after the initial standing start, there was a full-course yellow for a car that stalled on the grid. The green flag waved again on the next lap and Michael quickly moved into 7th position. A full-course caution came out with 17 minutes to go, and after the race went green again, Michael moved into the 6th position. With five minutes to go, Michael passed one more car to then claim the 5th position; that is where he finished when time expired in the 50-minute race.

“We finally got some laps today in Race 2 after a mechanical issue forced me to sit out Race 1 here at Road America,” explained Michael Lewis. “The pace of our car was quite nice, and it was really just about managing the tires. My team was telling me that a lot of guys were getting punctures from running over the curbs, so I was taking that into consideration. With a few laps remaining, I saw my teammate Ryan Dalziel in 3rd and I was in 5th, so I just tried to bug the guy in 4th to try and help out Ryan. He had it handled. Thank you to the team for the great rebound today. We’ll work hard again for another good result in Race 3.” 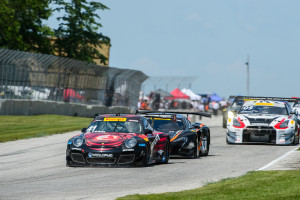 Michael Lewis started Round 12 of the Pirelli World Challenge in 9th position, but moved up through the pack to finish 5th.

The field of 38 GT/GTA/GT Cup drivers lined up for a standing start on Sunday afternoon, with Michael starting in 10th place, which was based on his fastest lap during Race 2. Once again, when the lights went out, a car stalled on the grid, which quickly brought out the full-course caution. After the long safety car period, the race finally went back to a green flag.

Within the laps just after the restart, Michael was running in the 7th position. After battling around the 7th and 8th positions for quite some time, Michael and the rest of the field were put under a full-course caution for another competitor whose car caught fire. During this caution, the 2nd place car pulled into the pits, which allowed Michael to restart in 7th when the green flag waved again. With only a few laps remaining, Michael kept his nose clean amidst the chaos and was able to overtake two cars to move into the 5th position exiting Canada Corner. At the checkered flag, Michael crossed the line for a P5 finish. 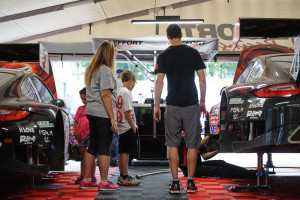 Fans are always welcome at EFFORT Racing. Here, Michael Lewis gives a tour of the paddock area and the No. 41 EFFORT Racing/Curb-Agajanian Porsche 911 GT3 R.

“It was pretty cool to earn another top-five finish for the No. 41 car,” said Michael. “It was a great way to cap off the weekend of three races. This last race was hard. I fell back a little bit and got stuck behind some cars the whole race. Our Porsche had a lot of pace, but I just couldn’t get around a couple cars. Luckily there was one final restart that gave me a chance to make something happen. I was just sitting back to let the chaos happen, and that’s exactly how it unfolded. Some guys crashed, and I was keeping my nose clean. Congrats to my teammate Ryan for another podium finish. Thanks to my team for keeping me calm on the radio. I was quite animated. Overall, the Porsches were strong and it was a great weekend.”

Coverage of the DeVilbiss Grand Prix at Road America presented by Cadillac will air on CBS Sports Network on Sunday, July 5, starting at 2 p.m. EDT. Please confirm the time with local listings. 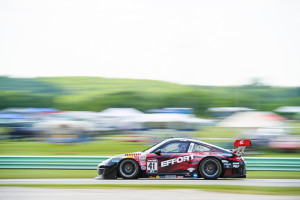 Fans are always welcome at EFFORT Racing. Here, Michael Lewis gives a tour of the paddock area and the No. 41 EFFORT Racing/Curb-Agajanian Porsche 911 GT3 R.

Michael and the No. 41 EFFORT Racing Porsche 911 GT3 R are scheduled to participate in Rounds 14 and 15 of the Pirelli World Challenge at the Mid-Ohio Sports Car Course on July 31–August 2, 2015.