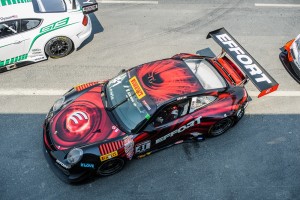 Michael Lewis and the No. 41 EFFORT Racing/Curb-Agajanian Porsche 911 GT3 R participated in Rounds 16 and 17 of the Pirelli World Challenge.

The EFFORT Racing team is running on all cylinders as they consistently deliver front-running Porsche 911 GT3 R race cars to Michael and his teammate Ryan Dalziel. Although, the team was faced with a challenge at the 3.048-mile road course, which sits 4,400 feet above sea level. The higher elevation typically benefits turbocharged engines rather than the Porsche naturally aspirated engines. However, Michael was still able to place the No. 41 EFFORT Racing/Curb-Agajanian Porsche 911 GT3 R 5th on the starting grid with a time of 1:48.323 for Saturday’s first race as a result from Friday’s qualifying session. (Michael originally qualified 6th, but a competitor was forced to start at the back of the field, which moved Michael to P5.) 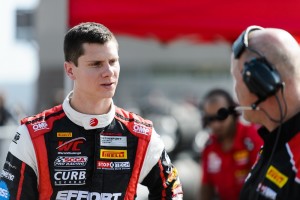 Michael made a clean, rolling start in Race 1 when the green flag waved, however, another competitor went off the course outside of turn 1, which brought out the full-course caution on the first lap. The race restarted on lap 4, and Michael’s No. 41 EFFORT Racing Porsche 911 GT3 R was part of a train of six cars, led by his teammate Ryan in 5th. As Michael drove along in 6th position, he was challenged by a number of competitors, but held on to cross the finish line behind his teammate, claiming 5th and 6th. 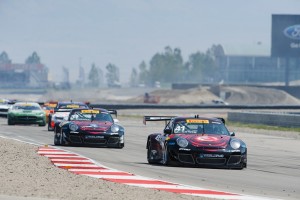 “Today was another 1-2, nose-to-tail finish for EFFORT Racing, running 5th and 6th, which was pretty cool because of being able to race with my teammate out there,” said Michael Lewis. “In summary, the race went pretty well. The tire degradation for our car was not terrible compared to the other cars. At the start of the race, Ryan got in front of me and he was pretty quick. I stayed behind him in the early stages to see if we could catch the Lamborghini who was just ahead of us in P4. Toward the end of the race, after running many green flag laps, we both started to get pressure from the Bentley and the Cadillac just behind us. When the checkered flag flew, it was pretty satisfying because we were really under fire for the last couple of laps. Ryan earned some more points to protect his championship lead, and we were both running competitively in the Top-5, so all smiles here at EFFORT Racing. The entire team has been working hard under the heat and in the altitude. For tomorrow, we’re going to work on keeping the cars cool under these hot conditions to hopefully get the Porsches up another row or so.” 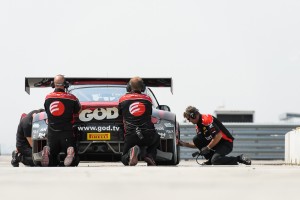 The EFFORT Racing team has been consistently preparing front-running race cars this season for Michael Lewis and his teammate Ryan Dalziel.

Michael lined up in the 7th position for Sunday’s Race 2, alongside of his teammate Ryan Dalziel, which would be a standing start for the entire Pirelli World Challenge grid. Qualifying for Race 2 was determined by the fastest lap turned during Race 1 on Saturday. When the red starting lights went out for Race 2, Michael lost two positions off the line and an additional couple of positions into the 1st turn. With no safety cars or yellow flags during the entire 50-minute race, Michael remained focused on gaining back the positions he lost at the start. As the race progressed, Michael began to fight back from P11 in his No. 41 EFFORT Racing Porsche 911 GT3 R. With encouragement from his team on the radio, Michael passed the diverse set of cars that make up the Pirelli World Challenge grid all the way up to the 6th position. While running P6 with three laps remaining, Michael was putting pressure on the car in the 5th position. When the checkered flag flew, Michael crossed the line for another P6 finish. 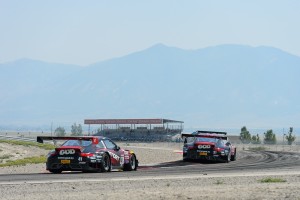 EFFORT Racing teammates Michael Lewis and Ryan Dalziel completed Round 16 of the Pirelli World Challenge in 6th and 5th, respectively.

“We started 7th and ended 6th today,” explained Michael, “and on the books, we improved one position and finished two spots behind my teammate in P4. However, the race was really much more dramatic for all of us at EFFORT Racing because of having to fight back from a slow getaway on the standing start. Today, our Porsche 911 GT3 R was pretty solid as we were able to climb back from P11 and end up P6 at the finish. Early in the run, we even set a few ‘fastest laps of the race,’ which was pretty cool. My team, with Stefan and Ricki on the radio, were telling me the gaps to the cars in front and giving me encouragement all the way during the race. They believed in me and provided a fast car to get back toward the front of the grid. From the driver’s seat, it was a pleasure to race with all of the competitors in the Top-10. We battled very hard, passing each other back and forth, but it was all clean. Hopefully the fans enjoyed the intense battles and the many overtakes! Thank you to the team for their hard work during these hot days up in the mountains, and good job to Ryan as well for getting some more points for his championship lead!” 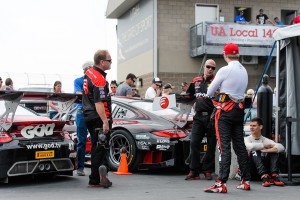 EFFORT Racing team waiting for the start of Round 17 of the Pirelli World Challenge at Miller Motorsports Park in Tooele, Utah.

This upcoming weekend, Michael and the EFFORT Racing team will head to Northern California’s Sonoma Raceway for the PWC 2015 penultimate event. “We’re going to Sonoma, and by running closer to sea level, it will give us more power with our naturally aspirated flat-six engine. I wish we could have raced more here at Miller. It was a very fun, methodical track, which I enjoy. It has long straightaways and nice flowing corners. Sonoma will be different, but I’m looking forward to it,” concluded Michael. 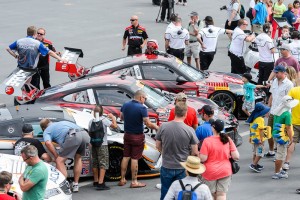