St. Petersburg, Florida — Michael Lewis swept both races of the Pirelli World Challenge (PWC) this past weekend, dominating on the streets of St. Petersburg. For both Rounds 3 and 4, Michael set pole position, the fastest race lap, led every lap and took the overall victory in each race. 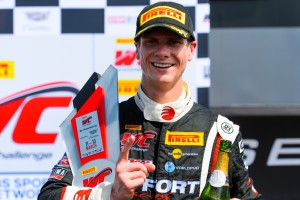 Michael Lewis dominated the streets of St. Petersburg, Florida, for Rounds 3 & 4 of the Pirelli World Challenge, by earning both poles, leading every lap, and claiming both victories.

Michael and his EFFORT Racing/Curb-Agajanian Porsche 911 GT3 R were the class of the field for the weekend, kicking it off by setting the fastest lap of Friday’s qualifying session with a time of 1:13.017, and establishing a new track record for the PWC. In fact, the top-seven GT competitors set times faster than the previous track record set in 2014.

“We earned our first pole position of the season for the No. 41 Porsche, and also my first outright GT pole with EFFORT Racing,” exclaimed Michael after climbing out of the Porsche after the qualifying session on Friday, March 11. “Thank you to Porsche Motorsport North America, EFFORT Racing Technical Director Stefan Pfeiffer, and everybody at EFFORT Racing for digging deep. Thanks to them for not only making the car quick, but for also preparing my teammate Patrick Long’s car,” after his No. 31 Porsche was damaged at the start of last weekend’s Round 2 at Circuit of The Americas. “We’re pretty strapped on time and personnel this week, so to get a pole position is going to make the guys more pumped for racing tomorrow. The car is fast this week, and I can’t say enough about this team. It’s a really special moment for the team after having so much adversity last week to then come back strong with a pole position.” 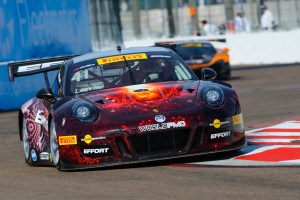 Saturday morning’s race began with Michael starting on the inside of the front row for his first ever GT pole. When the green flag waved to begin the race, Michael immediately jumped to the lead and wasn’t challenged for position as he entered Turn 1. He quickly pulled ahead from the second-place competitor, clicking off fast times lap after lap. He set the fastest lap of the caution-free race at 1:13.762, which would set him on the pole for Sunday’s second race. When Michael took the checkered flag, he crossed the start/finish line by more than 10 seconds over second-place finisher Alvaro Parente in a McLaren. 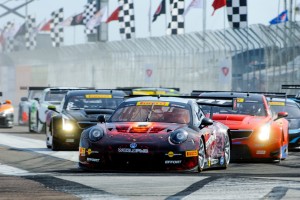 Michael Lewis leads the field of GT, GTA and GT Cup competitors into Turn 1 of Round 3 of the Pirelli World Challenge.

“It is so special to be sitting in victory lane especially with the overall win,” said Lewis. “The race was a tough one with no yellow flags and it was flat out all the way. I knew that Alvaro (Parente) had a quick car in the McLaren but our EFFORT Racing Porsche was just a terrific car today. I had some pressure in the first five laps. My engineers said just to keep my head down and don’t worry about the things behind you. It was hot out there and I wanted to hit my marks every time. I was actually preparing for a restart because I was sure there was going to be a yellow flag or a green-white-checkered situation. So I was trying to conserve my tires for a late-race caution. Starting from pole position really makes things so much easier for the race. So qualifying is extremely important here or on any street course. We look at video from practice to qualifying to the race and study the track. A lot of the work starts before we get to the track, then continues throughout the weekend. I want to thank Patrick Long for his mentoring and assistance in setting up the car. He couldn’t qualify for today’s race due to the crash at COTA last week but he did a super job driving through the field for seventh. He would have been right up there if he could have qualified yesterday. Following the COTA events last weekend, the team did a spectacular job preparing my car as well as rebuilding Patrick’s Porsche. Just a sensational effort by the EFFORT Racing team this week.” 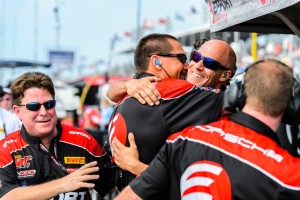 The EFFORT Racing team gave Michael Lewis a fast car for the Grand Prix of St. Petersburg, and their dedication brought results as they celebrate after Michael’s first GT win in PWC.

Momentum continued for Michael into Sunday afternoon’s race when again, he started on the pole for Round 4. This time when the green flag waved on the rolling start, Michael again made it through the first two turns cleanly, holding onto first. However, this race was just the opposite of the caution-free event on Saturday. Lap 4 came with a caution flag when one of the competitors hit a barrier in Turn 3, which caused a very lengthy caution period to clean up the track and place the barrier back into its original position. With 18 minutes left of the 50-minute timed race, Michael led the field to the green flag and started to pull away from the field after the first lap, including setting the fastest lap of the race on lap 19 at 1:13.744, which was the only lap of the entire race that broke into the 1:13 mark. However, another car hit the wall with just under 10 minutes left, bringing out another yellow flag. When the green flag waved again, the PWC field of GT, GTA and GT Cup cars saw only two more laps of racing. Michael kept his No. 41 Porsche out front in those final two laps to take another victory. 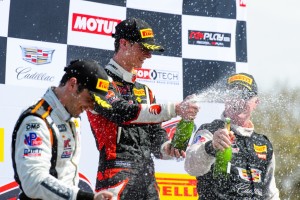 Celebrating his first GT win, Michael Lewis sprays the champagne on top of the PWC podium on Saturday, March 12, 2016.

“I am excited to bring victory number two for the EFFORT Racing/Curb-Agajanian Porsche 911 GT3 R,” said Michael. “This car was hooked up on those restarts. It was pretty much a restart game the whole race. There were two incidents during the race, and I’m glad to see those drivers were pretty much okay afterward. It was just about putting my head down and working to get a clean restart to try to get to Turn 1 first. After that, our car was on rails and we could beat everybody on lap time. It was just a restart race and that final restart was hairy. The car behind me had a run with his turbo, and I was just hanging on. Everything worked out from there. A big thank you to the team for working those long hours. That’s two for two.” 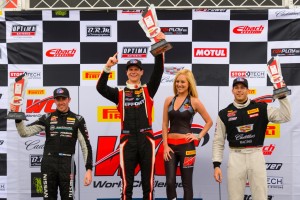 Michael Lewis conquers the podium again after his GT win in the PWC on Sunday, March 13, 2016.

Michael was interviewed twice last weekend by Sportscar365.com, and can be accessed via the following links:
Race 1 Audio Interview: https://m.soundcloud.com/sportscar365/michael-lewis-on-pwc-round-3-win-at-st-pete