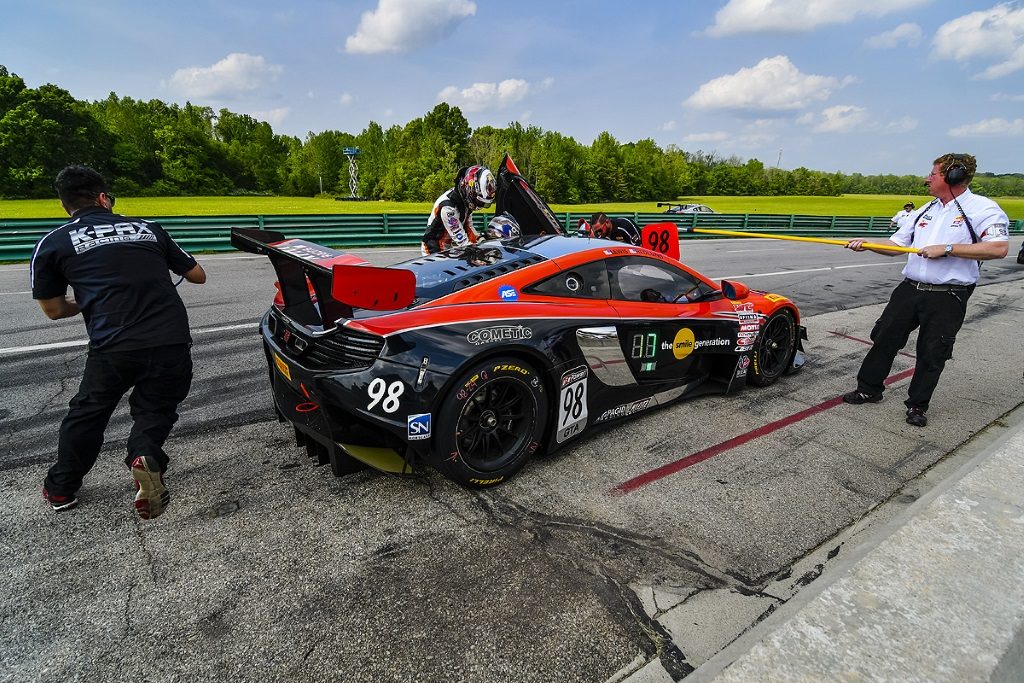 Participating in the Pro/Am category, the team visited the 3.27-mile Virginia International Raceway as part of a total of 38 entries in the Pro/Am, Pro/Pro and Am/Am segments of the SprintX Championship’s second season. 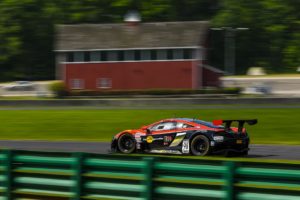 Fans could get close to the racing action at many points around the VIR circuit, and members from The Smile Generation were in attendance to cheer on Michael and the team.

Qualifying for Round 1 took place on Saturday morning, April 28, which placed the duo 22nd on the starting grid for Saturday afternoon’s first race of the weekend.

As Mike Hedlund qualified the car, per the rules, he started the 60-minute timed race on Saturday. Mike worked his way up to 17th overall and drove a flawless stint before conducting a mandatory pit stop between the 25- and 35-minute mark of the race. Because the No. 98 is categorized as a Pro/Am team, the pit stop and overall time on pit road must be a minimum of 90 seconds. Mike Hedlund handed off the car to Michael Lewis, with the two executing a flawless driver change. Michael entered the car approximately 29 minutes into the race. 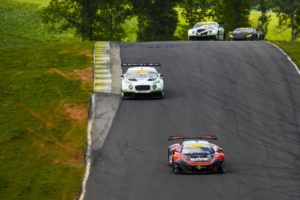 VIR is a favorite track among drivers as it features a variety of radical elevation changes, such as this one as the No. 98 tackles the fast turn 10.

As all the competitors began to finish their pit stops, Michael was running in 14th, and gaining positions through the pit-stop cycle. Unfortunately, after a few laps into his run, Michael made a mistake and ran off course in the first corner. Though he lost valuable time, and subsequently went a lap down, he only lost one position. Soon after this excursion, a caution came out for another incident, and Michael drove onto pit road to change a rear tire that was going down. Michael returned to the field and the race started on lap 24 with just over 15 minutes left to completion. As Michael was mired in the field, he focused on setting a fast lap time to be able to start the second race of the weekend in a good position. According to the rules, the fastest lap set by a driver in Race 1 determines that car’s starting position for Race 2. In the end, Michael crossed the finish line, bringing the No. 98 McLaren home in 16th overall, and 5th among the Pro/Am competitors.

Mike Hedlund continually put the No. 98 in contention for strong finishes for the K-PAX Racing team throughout the weekend.

“Mike Hedlund drove such a clean and a strong first stint,” explained Michael Lewis about his co-driver. “He really put our team in contention for a great finish, and he put me in position to pass cars and start moving forward. After our clean driver change, and running some good laps at the beginning of my run, I simply made a mistake trying to clear a car exiting the pits into Turn 1. I was too eager to do so, and just went too deep into the brake zone. I felt so down because of the great work that Mike and the team did to get us up the field in a commanding way. That mistake was on me, and I will work to have Race 2 be a success for our No. 98. At the end of the race, as it was going to be quite difficult to make up positions with little time remaining, we focused on setting a fast lap time to be able to get a solid starting position for Race 2.” 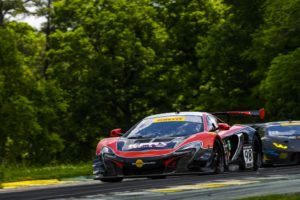 Michael Lewis and Mike Hedlund drove the No. 98 K-PAX Racing McLaren to two fifth-place finishes in the Pro/Am category of the SprintX Championship at VIR this past weekend.

Early Sunday afternoon, the green flag waved for Round 2 of the PWC SprintX Championship. This time, Michael drove first with the car starting in 14th position. He battled closely with other cars on the track, and dropped to 15th in the first few corners. Throughout Michael’s consistent and competitive stint, by being mistake free, he quickly passed two cars to 13th. While still running in 13th, a full-course caution came out to remove a car that went off the course. While the mandatory pit stops normally occur between 25 and 35 minutes into the race, the caution delayed the time frame for the field to conduct their pit stops. When the race returned to green flag conditions, Michael gained another spot on the restart to move up into 12th. While running in 12th and with the pit window now open, Michael executed the strategy by engineer Steve Newey to drive four laps past the opening of the pit window. This was to exercise the “undercut” plan and to use the clear track in front, while the other competitors executed their pit stops, giving Michael the opportunity to pass the competition by setting unobstructed, fast laps. After following this plan, Michael eventually brought the car onto pit road for the driver change with just over 22 minutes left in the race, on lap 17. Mike Hedlund entered the car, again with a flawless driver change, and competed hard until the end of the race. With eight minutes remaining in the timed race, the race would finish under yellow flag conditions as there was a heavy incident involving two cars. Mike Hedlund brought the car home in the 19th overall position, and scored another P5 finish in the Pro/Am division. 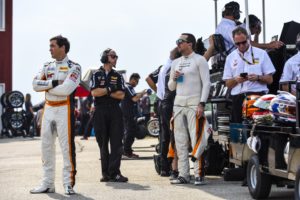 After the driver change, Mike Hedlund and the K-PAX Racing team follow Michael Lewis’ progress in the race.

“Today was another chance to give Mike and the team a good result by driving a solid first stint, and I felt that we did it,” said Michael. “After getting through the start, even after losing one position, I stuck to my plan of letting the other drivers make the mistakes in front of me. That was how we gained those positions before the pit stop. Many drivers were making contact, and we overtook them because of it. I felt that we had a good, consistent race car underneath us, and it felt good to hand off the car to Mike in a good position and with a clean car. During his run, he had some issues with the radio, but Mike drove through that challenge to bring home the car to another P5 finish. Thank you to Mike and the team for sticking with me and for keeping focused to have Race 2 go smoothly with solid driving, strategy, and teamwork. It was a pleasure to work with the K-PAX team for the first time at a race event, and I look forward to co-driving with Mike Hedlund and the team on back-to-back race weekends in a few weeks! Congratulations to the No. 9 car of K-PAX Racing on scoring P2 overall this past weekend!”

Rounds 1 and 2 of the PWC SprintX Championship will air on CBS Sports Network at 6 p.m. EDT/3 p.m. PDT on Sunday, May 7. 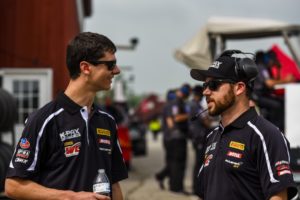 Michael and Andy Greer, Car Chief on the No. 98, speak just ahead of Mike Hedlund’s qualification run on Friday.

Michael Lewis and Mike Hedlund are eager to improve upon last weekend’s performance and look forward to bringing The Smile Generation, ASE, Cometic Gasket and Klotz Synthetics sponsored No. 98 McLaren 650S GT3 to SprintX Rounds 3 and 4 at Canadian Tire Motorsport Park in Ontario, Canada, on May 19–21.