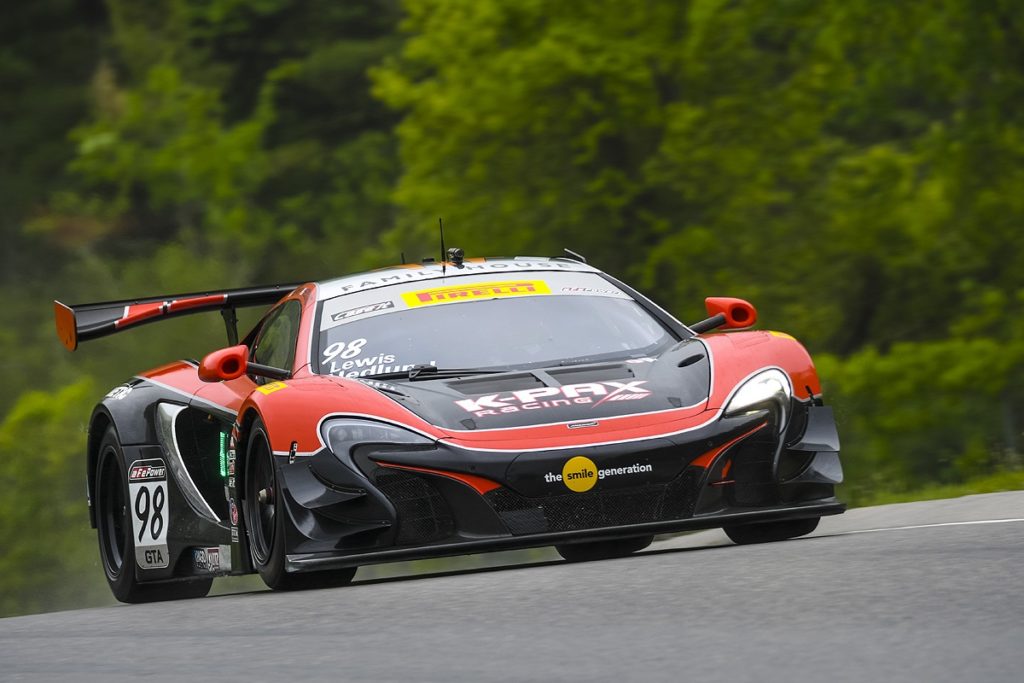 Michael Lewis and co-driver Mike Hedlund drove the No. 98 K-PAX Racing, The Smile Generation McLaren 650S GT3 to a 6th-place finish in the Pro/Am class of Round 6 of the Pirelli World Challenge (PWC) Sprint X Championship. Photos by Bob Chapman.

Lakeville, Connecticut — Michael Lewis and co-driver Mike Hedlund scored a 6th in the Pro/Am class of Round 6 of the Pirelli World Challenge Sprint X Championship on Saturday, May 27.

The duo participated in the two-day event, beginning on Friday, May 26, where Mike Hedlund qualified the No. 98 K-PAX Racing, The Smile Generation McLaren 650S GT3 to 19th in the early afternoon for Round 5, which took place only a few hours after. Mike also took the first leg of the driving duties for the 60-minute race. He drove a clean race and brought the car to pit road about halfway through the race for the mandatory 90-second pit stop and driver change with Michael Lewis. Michael exited onto the track and drove a few laps before bringing the car onto pit road with about 23 minutes left in the race. The car was then retired due to mechanical issues. 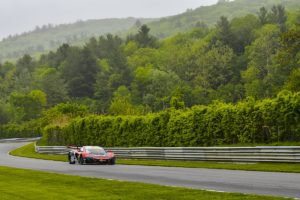 The team hoped for a better result on Saturday, and Michael took the green flag for the weekend’s second race. As the flag waved to start the race, Michael quickly passed several cars from his 21st starting position. At the same time, several frontrunners came together as the cars spread out approaching the first corner. Three cars immediately went off the track, which quickly brought out a full-course caution. When the race restarted, Michael had placed the No. 98 McLaren in 14th position. After much green flag running, drivers began their descent onto pit road at about the halfway mark of the race, and Michael soon transferred driving duties to Mike. With 26 minutes left in the race, Mike returned to the track and brought the car across the finish line in 6th in the Pro/Am category, and 18th overall of 27 cars. 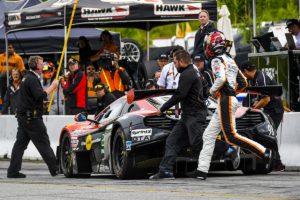 Mike Hedlund brings the No. 98 McLaren to pit road for the mandatory driver change as Michael Lewis prepares to take over the driving duties during Round 5 of the PWC Sprint X Championship.

“The second race of the weekend was a lot better than the first one,” explained Michael. “We’ve been having a string of Top-5 finishes in our class during each race, so we were close to that mark once again. Our car was placed very well in the running order after starting from the back, but as this field is very competitive, we lost a little ground in the last two laps after gaining on some of the frontrunners in our class. But, both our stints were clean and we stayed out of the chaos. Thank you to the entire K-PAX Racing team for their hard work during the past two weeks of back-to-back racing; extensive travel can make things a bit harder than normal and I am so appreciative of the 98 crew and everyone staying up late to ensure we have safe and fast cars to race. Thank you.” 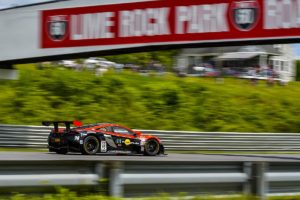 After overtaking several cars from his 21st starting position, and an accident involving three frontrunners during the start of Round 6, Michael Lewis drove the No. 98 into 14th place, seen here.

Michael and the rest of the Sprint X competitors will take a hiatus from racing until Rounds 7 and 8, which are scheduled for August 11–13, at Utah Motorsport Campus. 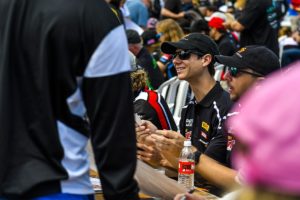 One of the highlights of race weekend for Michael Lewis is to interact with the fans at the Pirelli World Challenge autograph session.