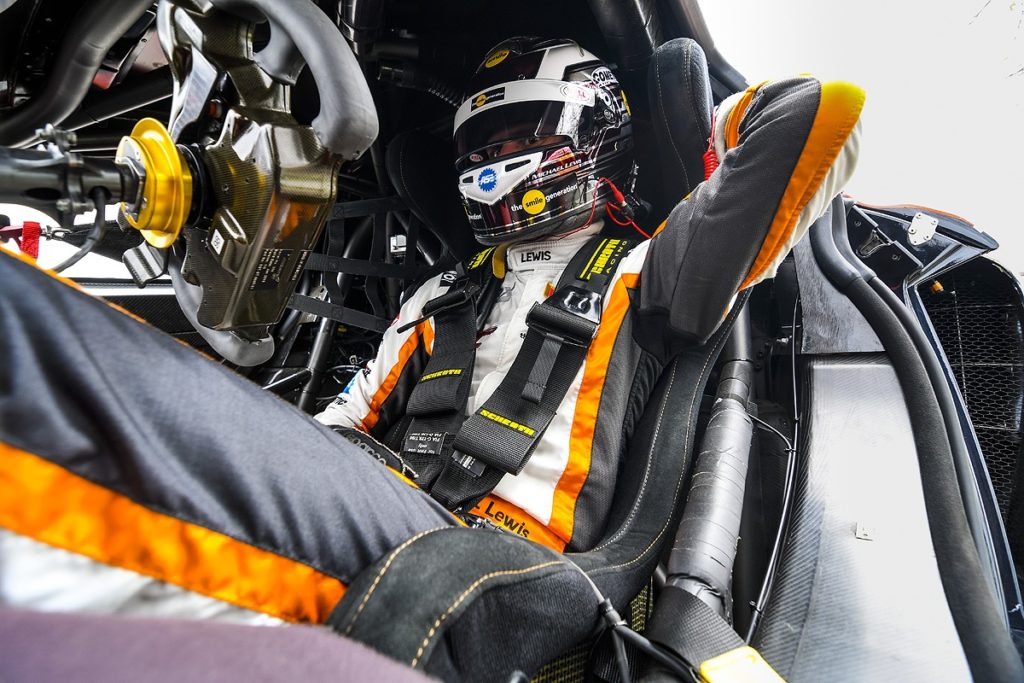 Michael Lewis is seen here in the No. 98 K-PAX Racing, The Smile Generation, McLaren 650S GT3 prior to Round 3 of the Pirelli World Challenge Sprint X Championship at Canadian Tire Motorsport Park on Saturday, May 20.

Bowmanville, Ontario, Canada — Michael Lewis and co-driver Mike Hedlund continue their string of strong in-class finishes by notching a 5th in the Pro/Am division in Round 3 of the Pirelli World Challenge (PWC) Sprint X Championship this past Saturday at Canadian Tire Motorsport Park. 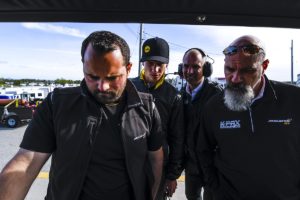 Mike Hedlund set a solid qualifying time on Friday, May 19, which was 5th fastest among the Pro/Am teams, and placing the duo on the outside of Row 9 to start Round 3. Mike initiated the driving duties in the No. 98 K-PAX Racing, The Smile Generation McLaren 650S GT3 and made a clean start. During his portion of the 60-minute race, he passed a few cars and brought the car into the pit area for the mandatory minimum 90-second pit stop. After a clean driver swap, Michael returned to the track and brought the car home in 16th overall of 31 cars, and 5th in the Pro/Am class. 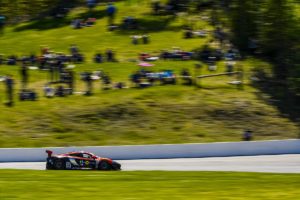 Co-drivers Mike Hedlund and Michael Lewis drove a clean race on Saturday, May 20, and were able to gain positions from their qualifying effort.

“After our pit stop, the yellow flag flew because of contact between two cars just in front of us,” explained Michael Lewis. “Unfortunately, one of those cars was my teammate in the No. 9. When the race resumed, I could feel that our car was quite strong. The pack in which we were racing happened to be the Top-8 cars of the overall race. Though we were a lap down, mainly because of our adherence to the Pro/Am pit stop regulations, we had a solid car and were staying right with the frontrunners. While driving in the pack, I was focused on battling the cars that were on my same lap and that were in our class, so that we would lose the least amount of time on those within our class. I didn’t want to get caught up in a battle that wasn’t for position. In the end, Mike’s solid driving and our clean pit stop gave us this result. We are working hard to break into the Top-3 of our class. Thank you very much to our 98 crew of Andy, Derek, Kenny, and our engineer, Joe Lajoie, who was filling in for our season-long engineer, Steve Newey. Joe provided a solid plan for the weekend.” 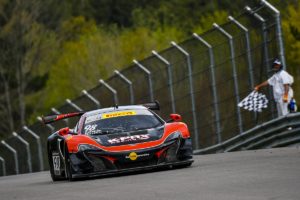 The No. 98 duo of Michael Lewis and Mike Hedlund notched another 5th-place finish in the Pro/Am class in Round 3 of the Sprint X Championship.

On Sunday, the K-PAX Racing duo would have started Round 4 in 21st position of 36 cars, based on the car’s best lap during Saturday’s race. However, due to intermittent heavy rain showers, and flooding on the 2.458-mile permanent road course, PWC officials announced the race would be postponed to a later date for the safety of the competitors.

“This weekend at Canadian Tire Motorsport Park was pretty nice,” observed Michael. “We ended up having a clean first race. Obviously, the last race was cancelled but that’s racing. We’ll just move on to make that one up somewhere else. But Mike Hedlund and I did a nice pit-stop exchange, and he gained a few spots. We ended a spot or two from where we started, so on paper we improved. We were able to squeak through all the chaos, and the car was really fun to drive.” 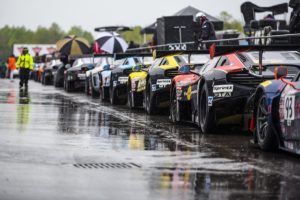 Due to heavy rain and standing water on the road course at Canadian Tire Motorsport Park, Round 4 of Sprint X has been postponed. A date will be announced later. The team will visit Lime Rock Park in Connecticut this weekend for Rounds 5 and 6.

To watch Round 3 of the Pirelli World Challenge Sprint X Championship, tune in to CBS Sports Network on Sunday, May 28, at 6:30 p.m. EDT.

Michael and the K-PAX Racing team won’t have much downtime between races as they head to Connecticut for the Grand Prix of Lime Rock Park, this weekend, May 26–27. Following is the schedule for this weekend’s activities: