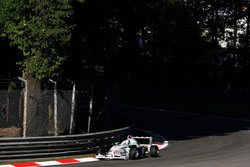 Free Practice:
Rookie Michael Lewis came to Monza on the back of some strong testing results which he had achieved at the track earlier in the year and was looking forward to his first experience of racing at this high-speed circuit. “I had spent the previous two weeks working hard with my driver coach Giacomo Ricci on preparing the best approach to attack this famous circuit,” said Michael.

Michael and the rest of the field took to the track under perfect weather conditions on Friday morning. It took Michael just six laps to begin setting lap times in the two minutes and at the end of the 30-minute session Michael was P1 with a time of 2.00.001.

Qualifying:
There was optimism among Michael and the Eurointernational Team for a good qualifying result because of the speed that Michael had shown during the early morning free practice session. “I felt very comfortable during the morning practice session and I wanted to repeat my performance for qualifying so I concentrated on hitting all my marks and to push hard to get the full value from the new tires. However, my qualifying results were not at all what I hoped for,” added Michael, who finished the session in P15. Michael and the team later found that it appeared that the engine had been down on power during Friday afternoon’s qualifying session so the Eurointernational Team made an engine change for Saturday’s race. 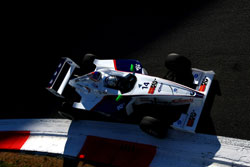 Saturday Race:
Michael lined up on the eighth row of the grid on Saturday morning in 15th position for the Saturday morning Formula BMW Europe race. Michael made a clean start, avoiding a number of racing incidents, which occurred around him, and steadily made his way up through the field. “Starting close to the back of the grid I knew that I needed to get a good start and try to get in good position by the first chicane to pass as many cars as I could;” commented Michael. By the end of lap one Michael had moved up to P11 and was closing on the cars ahead. Michael kept a cool head despite a number of cars running off the track around him and after 12 laps of the track he crossed the finish line in P5. “I had a fantastic race, working my way from P15 to P5. It was not only the best result of the season for me but also one of the most rewarding races, making up 10 places in the race. My Eurointernational engineer Nicola Sgotto gave me an excellent car so the result was definitely a team effort,” added Michael.

Sunday Race:
Michael Lewis started the final race of the season from the rear of the pack in 17th position due to picking up a 10-grid position penalty obtained from a rules infraction during Saturday’s race. “Starting this far back was a real challenge and I knew I needed to push hard, attack and start passing cars so that I could have another good finish. The long straights at Monza allow for slip stream opportunities for overtaking so I knew I could improve my position during the race;” said Michael.

Michael made a good start and by lap four had made up seven places and was running in P10. Michael had caught the pack ahead of him and was lining up the car in front for an overtaking maneuver when he was hit from the side by another driver and slid off the track into the gravel. Unfortunately Michael was unable to continue the race. “Monza is a special circuit and I truly enjoyed my experience here. I had some good results during the weekend and I am looking forward to returning to the track in the future in another series,” continued Michael.

The Future:
The Monza race was the final race for Michael Lewis in the Formula BMW Europe series. “The Formula BMW Europe program was outstanding and I was blessed to be part of Antonio Ferrari’s Eurointernational Team. All year long Antonio, Nicola and my mechanic Antonio gave me a car that was fast and also the encouragement to work hard and push to improve my driving,” commented Michael.

Before returning home to the US where Michael will continue his education at California State University, Fullerton for the fall semester, he will test an F3 Italia car on Tuesday, September 14. Michael and his management are currently reviewing a number of racing options for 2011 including returning to Europe to race in a F3 category.